Front page of the day. The British tabloids can sink a boot in like no other. Today’s Daily Mirror on the charges laid against Rebekah Brooks: 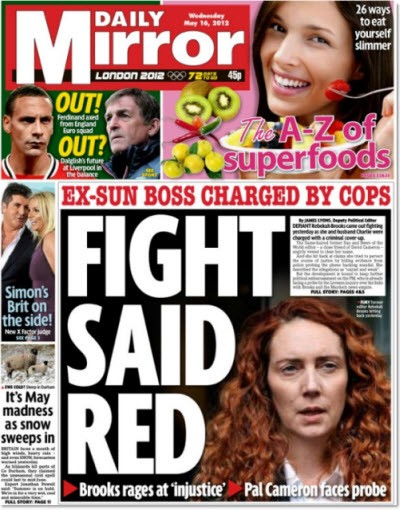 “Kyle Sandilands’ Sydney broadcaster, 2Day FM, will be subject to an additional licence condition that ‘elevates’ the guideline concerning ‘generally accepted standards of decency.'” — The Australian

“Fairfax Media’s head of digital publishing Jane Huxley is leaving the company at the end of the month after her role was effectively scrapped.” — The Sydney Morning Herald

“Unsung self-proclaimed Facebook co-creator Aaron Greenspan, who is so upset at being left out of David Fincher’s Oscar-winning The Social Network that he is refusing to give up on a long-running legal battle to win his rightful place in the story.” — The Guardian

Sorkin signs on as screenwriter for Steve Jobs biography

“After flirting with the project for months, Aaron Sorkin is finally on board as the screenwriter of a movie to be based on Walter Isaacson’s biography of Steve Jobs.” — New York Times