Craig Thomson continues to get the press

Thomson himself remained third in our chart but narrowed the gap on top spot claiming in interview that he was framed.

Coverage for the federal budget returned from overwhelming to high levels soon after its immediate reporting cycle concluded and PM Gillard resumed another typical week of media duties (defending her stance on gay marriage, expressing disgust over the HSU scandal, announcing funding for Afghan defence forces, explaining the carbon tax) while Treasurer Swan continued to rack up print headlines over his fiscal determinations.

The big movers this week were Independent MPs Windsor, Oakeshott and Katter in response to the Opposition’s intensified attacks on MP Craig Thomson following the FWA report. Windsor’s declaration that Thomson has the right to be presumed innocent until proven guilty followed Katter’s vow he wouldn’t pre-emptively judge the scandal-soaked former HSU boss. That steadied Gillard’s grip on power after Oakeshott announced second thoughts on his agreement with the government, saying the PM may not have acted in good faith by forming a government that included Thomson.

Thomson himself remained third in our chart but narrowed the gap on top spot claiming in interview that he was framed. Ironically, only the equally mired Mr Speaker Slipper can rule on matters of privilege surrounding the statement Thomson has planned for parliament to extrapolate on his version of events in the alleged use of escorts on HSU dime. For Opposition leader Tony Abbott, back to his second place residency this week, it must seem like shooting fish in a barrel. 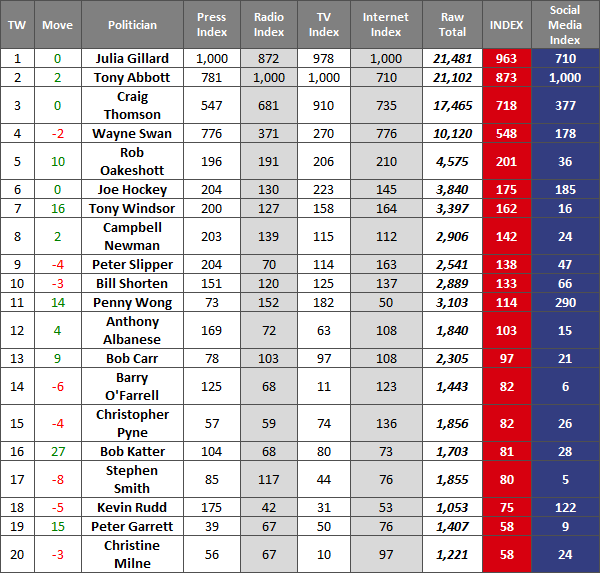 Abbott fuelled social media conversation this week after intensifying his attacks on government and the unions.

Brave of Obama to historically announce his support for gay marriage. If one follows the timeline of his public opinion on the issue since 2008, he should be front and centre at Mardi Gras by 2020.

Christine Milne will not be happy, neither with the extreme Greens, who can see they are going backwards in the express lane

Suzie is interested. Typical indicator and excellent guide that the topic in question attracts undiscerning readers! Time to quickly move on! Bye!