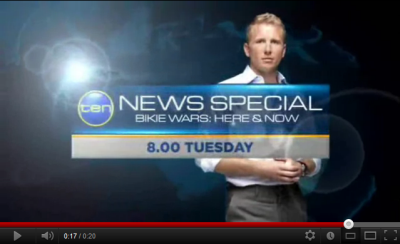 McDonald breathlessly announces — from a chopper no less — that “when Australia goes to sleep that’s when the bikie wars begin”. Australia is currently experiencing a surge of bikie gang-related crime, just as it has done on myriad occasions since their emergence in Australian society in the 1960s. A quick Google search confirms an explosion of bikie gang crime is not new. Crikey looks forward to watching McDonald’s report.

Meanwhile at 8.11pm on Sunday, 16 minutes after the Bikie Wars: Here & Now promo and also during an ad break for MasterChef, an on-air promo for Ten’s much anticipated new series Bikie Wars: Brothers in Arms was aired: 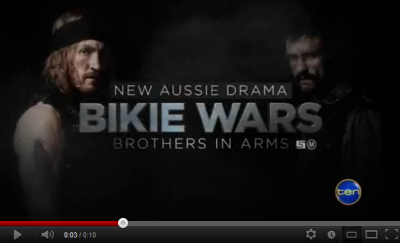 McDonald’s show will air tonight at 8pm — right before Bikie Wars: Brothers in Arms at 8.30pm. Propping up your expensive drama series with a news “special” might be rock bottom for the struggling network. — Leigh Josey

Uhlmann watches Media Watch. Last night Media Watch slammed its ABC colleagues for a 7.30 report that examined claims by former immigration department workers of known fraud in visa applications, including Pakistani asylum seekers pretending to be Afghans. Media Watch — and refugee advocate Marion Le — reported that Le had been misquoted and taken out of context.

“We’ve got no doubt that 7.30’s informants sincerely believe the family reunion system is being widely abused: and that’s a legitimate story. But it was sloppily told; and in seeking to corroborate the whistleblowers’ claims, 7.30 took impermissible liberties, I think, with Marion Le’s interview,” declared host Jonathan Holmes. Unsurprisingly 7.30 host Uhlmann wasn’t impressed by the Media Watch report. He took to his personal Twitter account to complain:

Ramadge back on the beat. Who’s that young buck reporter “Paul Ramadge” in Indonesia filing for Fairfax papers, including today’s Australian Financial Review?

That would be the very same Paul Ramadge who normally tells other journalists what to do as editor of The Age. He’s touring Indonesia along with other editors.

Front page of the day. And the bad news keeps coming from Greece where political instability and a grim economic outlook may see the country’s withdrawal from the eurozone: 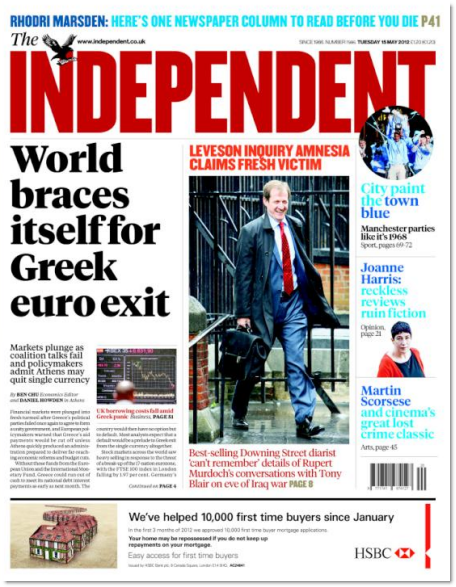 The Department of Corrections. “A Vaucluse waterfront home sold for $18 million yesterday, the third highest priced sale this year…” opened a page six article in The Sydney Morning Herald on May 11: 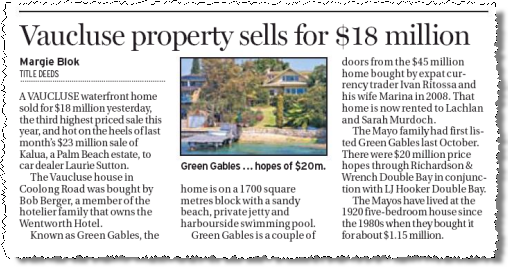 Um … no it didn’t, as explained the next day in its May 12 edition:

Leveson asks No. 10 if Coulson was only aide spared vetting

“Downing Street has been asked to explain whether Andy Coulson is the only senior press adviser to recent prime ministers to have been spared high-level security vetting.” — The Guardian

Campbell: no evidence of trade-off between Blair and Murdoch

“Tony Blair’s former spokesman Alastair Campbell told the Leveson inquiry today there is no evidence of a “trade-off” having taken place between the former Prime Minister and News Corporation boss Rupert Murdoch.” — journalism.co.uk

“Fairfax Media has admitted it released inflated data for the number of pages being used on its smartphone apps when it launched its new Metro Media Audience Reports to the market three months ago.” — mUmBRELLA

How the media created a (fake) ban on texting while walking

“There were plenty of headlines on the internet this morning like ‘War On Texting While Walking’. But after a couple of phone calls were made by MSNBC.com’s Rosa Golijan, it turns out there’s no ban — and there never was.” — The Atlantic Wire

Police find body of journalist in car in Mexico

“Another journalist has been killed in Mexico, this time in the central state of Morelos.” — Global Post

Debate revs up on bikie laws

Absurd anti-bikie laws do not stop bikies, but legalising drugs will

With his “memory”? Between The Independent and journalism.co.uk it’s a wonder Campbell can give those assurances about there being no trade-off with Murdoch? Or at least “evidence”?

As commenters on Pure Poison pointed out last week, Paul Keating’s (justified) skewering of Uhlmann on The Drum had a hasty defense of Uhlmann appended to it by Bruce Belsham (ABC head of Current Affairs). Now the Media Watch report – maybe 7.30 staff and their overlords should worry less about their glass jaws and concentrate on doing a better job.

It appears to me that Uhlmann didn’t realy address the majority of MWs points about the story.

Sadly, I believe Uhlman is trying his best.

My Nanna says if you can’t say anything nice about someone, just remain silent. In regards to Chris Uhlmann, I’d just like to say (on my knees) “PLEASE KERRY, come out of retirement.”