It seems Labor MPs are trying to sell their budget message through any outlet possible, with Minister for Employment Bill Shorten answering questions from querying mothers on Mia Freedman's Mamamia.

It seems Labor MPs are trying to sell their budget message through any outlet possible, with Minister for Employment Bill Shorten answering questions from querying mothers on Mia Freedman’s Mamamia. For one hour Shorten replied to questions about the budget — explaining changes to foreign aid, superannuation and tax cuts. Although some just sounded like Dorothy Dixers: 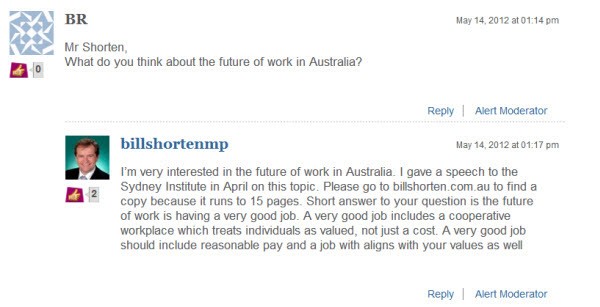 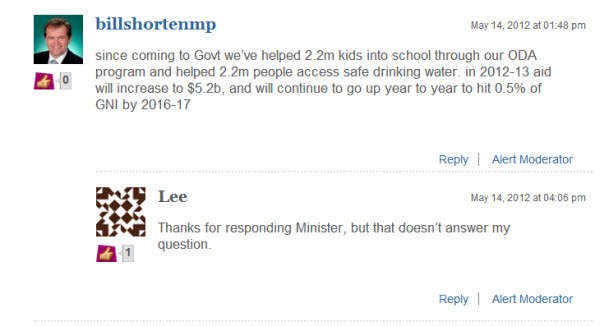 He acknowledged he wasn’t a great typist:

Curiously, no one seemed to ask anything about Shorten’s Sunday tabloids splash, where he and wife Chloe graced the front page with an interview declaring their marriage was strong amid nasty rumours going around media and politics circles. Did no one ask? Or were comments deleted or moderated in advance?

Crikey called Mamamia‘s news editor Rick Morton. Like Crikey, Mamamia uses a post-publishing moderation system. But Morton told Crikeythat not a single comment needed to be removed and that all comments and questions focused on budget policy.

“Bill this budget has was the most visionary I’ve seen in a very, very long time and managed to pull off a number of seemingly impossible feats simultaneously, yet it took a personal slur against you and a pre-emptive strike from you to make the front pages of the Herald Sun. Has the government learned anything in terms of simplifying complex messages (reading age is pitched at 7yo for Sun) and making pre-emptive strikes re positive information?”

But it seems Shorten didn’t want to answer that one …