NSW and Victoria have slashed their level of public housing investment to take advantage of the GFC stimulus packages.

Investment in public housing has collapsed in NSW and Victoria, with both states taking advantage of stimulus-era funding to pull back on their own investment in housing.

ABS data on housing approvals shows that, after the Rudd government’s investment in social housing as part of its financial crisis stimulus packages concluded, the national level of investment in social housing reached an all-time low in the second half of 2011 and remains there. The result is just 172 publicly funded dwelling units were approved nationwide in March. 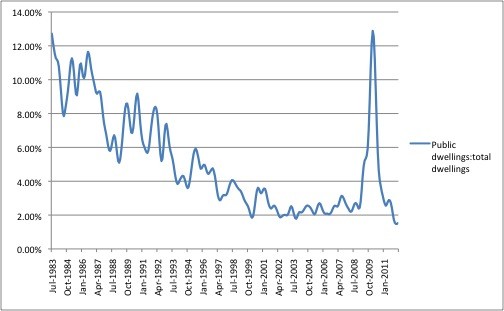 And the data shows who has cut back on spending: NSW and Victoria. In NSW this year, just 31 public housing units have been approved for commencement. There were just 511 in all of 2011, compared to 927 in 2007, before the financial crisis, and 4736 in 2010, when the stimulus package work was in full swing.

It’s a similar story in Victoria, except that the Victorian government spent its social housing funding over a longer period, and was still rolling out units in 2011: 39 units have been approved this year, and just four in March.

This is the time-honoured state government practice of cost-shifting — moving state funding out of any activity for which the Commonwealth provides additional funding, in effect negating the benefits of any additional Commonwealth investment. In relation to the highly successful BER stimulus package, the Commonwealth made funding conditional on the states not reducing their own capital expenditure in schools.

However, that doesn’t stop governments in the future from cutting back on later investment. That’s what NSW and Victoria, the two biggest housing markets, have done on social housing. The result is that our national level of public housing construction has sunk to an all-time low.

It also means that taxpayers from other states end up picking up the tab for what the NSW and Victorian governments, and their citizens, should be paying for.

Bernard, it is one way for NSW taxpayers to get back their GST revenue pinched by the other states every year.

Sounds about right Bernard.
I may be biased but I have never known a coalition government to build anything. They sack people or sell things. Then they tell us how lucky we are to have them in charge.

How right you are Davidk. On top of that the effect is that our Building Sector is in a slump and guess what the State Coalition Governments will be doing blaming the Federal Government whilst giving handouts to their mates. When in the hell are Australians going to wake up to this tried old game. We could save ourselves a lot of money and grief if we simply abolished the States and got rid of the extra layer of Politicians. That would do wonders for our State debt.

DavidK – “sack people & sell things” and those things always originally built with taxes; how soon before Fatty O’Barrell tries to sell the Harbour Bridge>
As the most perfect example of the NuRite mindset, consider Thatcher in 80s UK insisting on the sale council housing. The revenue was to be used by the local authorities for all their expenses EXCEPT one, building more council housing.
Cognitive dissonance, thy name is rightard.

@ AR
Qu in ite so. If it had been left to the coservatives we would still be catching a punt across Sydney harbour and relying on telegrams for high speed communication I think. I fear Thatcher was a socialist compared to wrong way Abbott who seems to think a reduction in economic activity will lead to growth in the economy.