Australians are catching the Greek disease

The world banking system is about to be tested once again by another European crisis because politicians and central bankers underestimated the power of people, writes Robert Gottliebsen.

The world banking system is about to be tested once again by another European crisis because politicians and central bankers underestimated the power of people. And here in Australia we have a version of the “Greek game” being played under the surface.

In Europe whether they be Greek, French or Spanish, twenty first century Europeans will only suffer German imposed austerity for a limited period. The Greek crisis will be the trigger for the euro to be used by fewer countries. Bankers will suffer big losses because they underestimated people power and did not understand that in long term you can’t have a common currency operating in vastly different economies.

The Greek crisis gains the headlines but deep down there is a global consumer nervousness sweeping the western world. Australian consumers are as nervous about the future as those in Europe or the US. Among the major developed countries around half of consumers feel they are in financial trouble or not financially secure.

Fascinatingly, Chinese consumers feel the most secure. Enlarge the graph below and you will be fascinated by the trends that emerge. 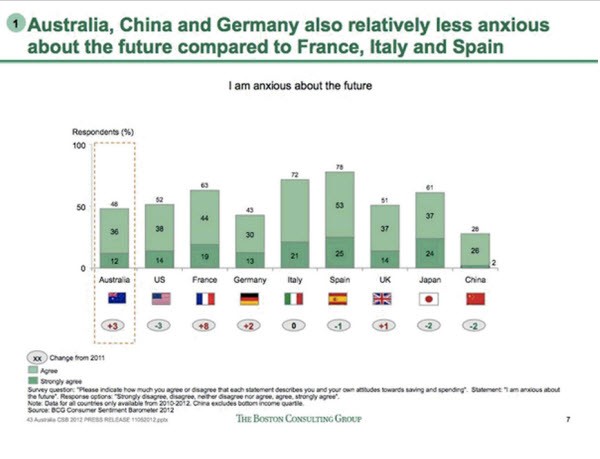 Forty seven per cent of Australian consumers feel they are in financial trouble or not financially secure, up from 36% in 2011.

Australians, along with Germans, share the “honour” of having the biggest rise in the number of consumers who feel they are in financial trouble or not financially secure. In Australia the number rose a whopping 11% from 36 to 47%.

Australians are affected by the European crisis because it boosts the cost of our wholesale overseas borrowing by banks. But we also have our version of the Greek disease. Like the Greeks, we allowed our worker productivity to fall dramatically and we then were handed a high dollar courtesy of the mining investment boom. (The Greeks got a high euro). But then our Canberra crazies dreamed up a carbon tax to further boost the cost of Australian goods and services and then sprayed money to lower income people while squeezing middle income Australia. (Federal Budget 2012: Ripping into middle Australia, May 8). Just as the Greek politicians are being taught by their people, so will Australian politicians who do silly things be taught a lesson.

This lack of job security is causing a dramatic change in Australian spending habits and I think the change is going to be with us for the medium term so businesses better get used to it.

For example the percentage of Australian consumers saying they will spend less on discretionary items in the next year increased from 47% in 2011 to 50% in 2012. This is higher than in the US (46%), the UK (47%) and about level of the average of the major European economies surveyed.

In other words Australians are saving.

I have taken out the graph of Australian internet shopping as a reminder to all those who own shopping centres –your world is being turned upside down so you had better change your ways including lowering exorbitant rents. This particularly applies to those aiming at higher income consumer markets.

Just as a batch of new politicians will not be able to ease the Greek misery, so this switch to the internet is going to gather even more momentum. 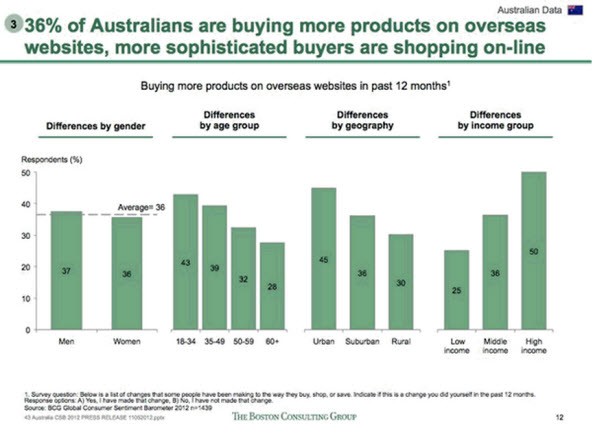 Footnote: The Boston Consulting Group’s annual Consumer Sentiment Survey was conducted in April and covered 15,000 consumers in 16 countries. The survey included more than 1,400 consumers in Australia.

*This article was first published at Business Spectator.

When articles like this are put through from Business spectator or other sources, there should be a special effort made to attribute the author at the beginning of the article. That would avoid having to read half-way down the article to find such treasures as:

“But then our Canberra crazies dreamed up a carbon tax to further boost the cost of Australian goods and services and then sprayed money to lower income people while squeezing middle income Australia.”

I don’t think Crikey should present only one side of an argument, but this article is not adding anyhting to a real discussion on the topics of the day.

You could just as easily argue that a common currency for the US is a bad idea. The devestation of US industry would not have been nearly so bad if the industrial regions could have lowered their prices with a weaker currency to reflect the economic weaknesses in the rust belt.

I think that a global currency makes sense, but it looks like a regional one can’t work. Either has to be all or nothing.

The perceived financial insecurity being felt is more a result of Opposition rhetoric, big business spin and a feeble media obediently playing along with their fear-mongering game.

The actual reason for financial pressures on middle Australia is massive personal debt built up from 50% of incomes to 150% during the Howard Government.

The current government has been unable to sell their story, both through poor communication on their own behalf and a hostile media environment. On top of this they have been unable to reduce the pressures of housing costs and therefore do anything to ease debt.

a) “Like the Greeks, we allowed our worker productivity to fall dramatically”

b) “This lack of job security is causing a dramatic change in Australian spending habits and I think the change is going to be with us for the medium term so businesses better get used to it.”

We keep being told that the answer to a) is more labour market flexibility – but then that will only increase the effect noted in b). If WorkChoices is the answer, someone is asking the wrong question!

We all know that worker productivity is code for reducing wages and conditions.

If anyone think that is going to make the average toiler feel more secure in their job, they’ve got rocks in their head.

Maths isn’t my strong point, so can someone please explain how putting LESS in lots of workers bank accounts each week, is going to make them put (via spending) more money into the economy?