Age journalist Denise Ryan has two interesting stories in today's paper about issues affecting Melbourne's African-Australian communities. Except a quick look at them could make a reader confused ... Plus other media news.

“News Limited is seeking a new publishing platform that will feed relevant tweets and other social media updates directly to journalists as they draft stories, just like a wire service.

The decision to pursue the social media project, which will pipe Twitter and Facebook streams to computer screens as journalists write stories, will form part of the company’s $60 million editorial computer system upgrade. News has decided all mastheads will adopt the Methode publishing system, which will publish copy in print and also online.

…News desks have increasingly come to view social media as an important source of breaking news information and public, corporate and political reaction.”

What a contrast from The Oz’s editorial back on April 30, 2009 titled ‘Time is up for Twitter‘:

“Like swine influenza, technologies such as Twitter race around the world before spluttering out. And when they do, the news is reported via a technology that is robust and portable, one that is information rich and never crashes — the platform for the online information age you are reading now. And the story it tells about the latest online fad is always the same.

Like diseases that must mutate to infect ever more hosts, transitory technologies have an enormous impact until people build up resistance – which is what is happening to free social messaging service Twitter now. Certainly Twitter has generated a pandemic of popularity, but it appears many people quickly decide Twitter is tedious, with 60 per cent of new users becoming ex-users in a month. Anybody who has used it knows why.

Twitters in the information industry — journalists, political staffers, publicly funded issues activists — think Twitter is terrific because it allows them to all but instantaneously agree with each other on the issues of the hour. But in their enthusiasm, they confuse the medium for the message.

Twitter’s 140-character message format is a content-killer, leaving most tweets with the compelling content of those “I’m on the bus” mobile phone conversations impossible to avoid on public transport.” 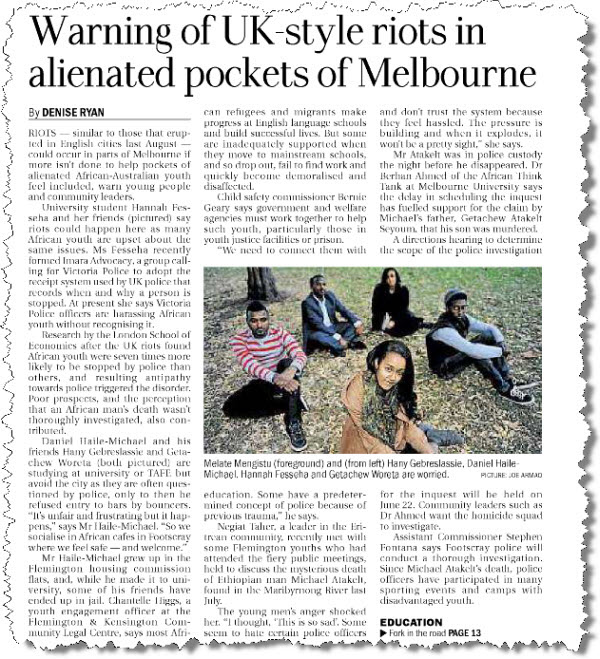 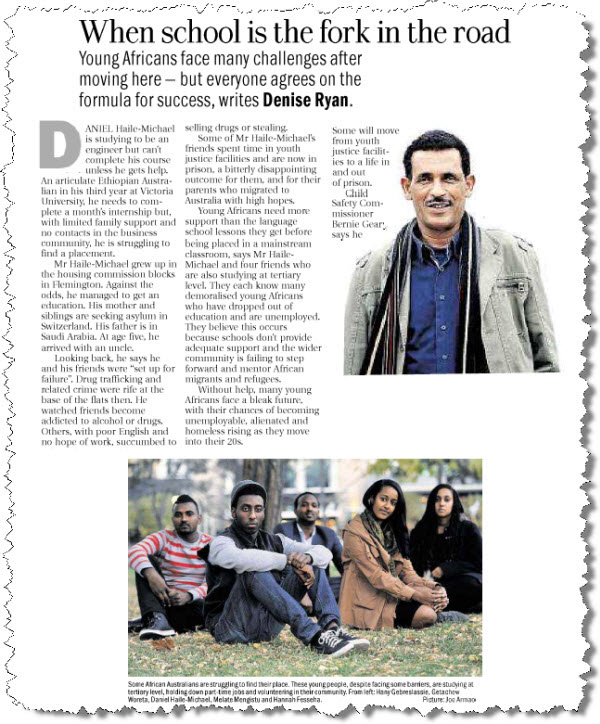 Yes, it’s two different stories with the same people quoted and similar pictures used. Daniel Haile-Michael spoke with Ryan about the education issues he has struggled with — such as trying to find an internship with no business contacts — in one story, and social alienation — such as when bouncers refuse him and his friends entry to a city bar — in another.

Both great stories, but maybe they could have been spaced out a few days? Or even found some other photogenic young African-Australians to interview.

Dick Smith’s food for thought. A version of David Salter’s piece for Crikey last week on Dick Smith Foods and A Current Affair ran as a column in The Sunday Telegraph yesterday. It was essentially the same text, although the Tele dropped the reference to “unsettling echoes of Pauline Hanson”, and Salter added (in response to some welcome prompting from Crikey readers) an outline of how Smith had sold the brand marketing licence to DSF for five years to Sanitarium Health and Wellbeing, a company ultimately owned by the US-founded Seventh Day Adventist Church.

Smelling a stoush, The Sunday Tele sought comment from Smith. Chief reporter Linda Silmalis asked him to respond to Salter’s claim that he and his company were adopting “simplistic, ultra-nationalist” tactics in an attempt to trade their way out of trouble by exploiting an appeal to patriotism. “He doesn’t want me to use patriotism,” Smith said, “but how else, if we don’t use patriotism, do you get Aussies to buy Aussie products? I have never taken a cent out of Dick Smith Foods — not a cent.” He went on to accuse Salter of being “nasty” and “an ABC leftie” (Salter was last employed by the ABC 13 years ago).

Smith also confirmed that DFS had stopped making any charitable donations because the company was not showing a profit. Between July last year and March it recorded a loss of $240,000.

Poll of the day. Kudos to Crikey blogger Matt Smith for pointing this out to us this morning. The Sunraysia Daily — the august newspaper for the greater Mildura area — is running a poll on its website on a proposed increase on the price of take-away alcohol. One wonders why a simple yes or no option does not suffice: 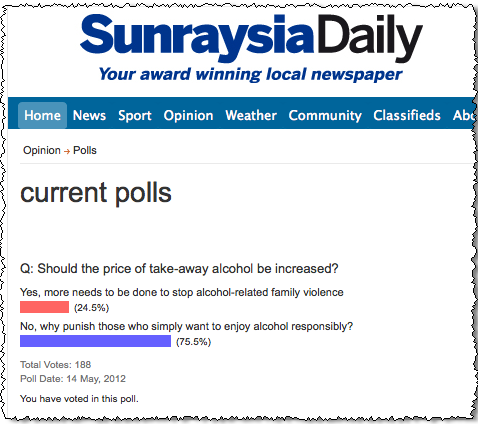 Front page of the day. The latest edition of Newsweek leads with “The First gay President” Barack Obama sporting a rainbow halo after revealing he supported same-sex marriage on a US television show last week: 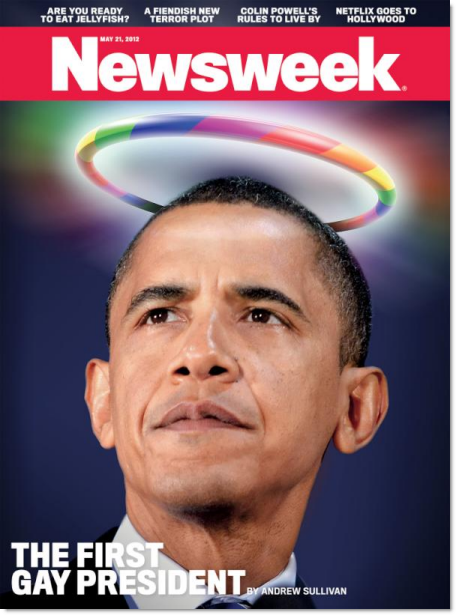 The Department of Corrections. Meanwhile, last Thursday, Canada’s Globe and Mail — in its editorial — wrote that likely Republican presidential nominee and practising Mormon Mitt Romney: “… opposes gay marriage, and accepts civil unions only up to a point.” Apparently Romney doesn’t “accept civil unions up to a point” because the next day The Globe and Mail ran this correction: 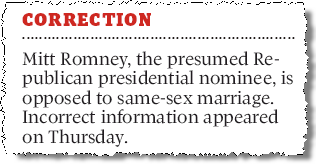 Diana’s former lover may have had phone hacked

“Diana, Princess of Wales’s former lover Hasnat Khan has revealed that police believe his phone may have been hacked in the months before the inquest into her death.” — The Guardian

“Nine has appointed Simon Hobbs as its new Sydney News Director, after Darren Wick was promoted to Director of News and Current Affairs in February.” — TV Tonight

“Adem Ozkose, 34, and Hamit Coskun, 21, are expected to be released after negotiations reflecting the opaque blend of regional rivalry and co-operation between Turkey, a foe of Syria’s regime, and Iran, a staunch supporter of Damascus.” — The Washington Post

“The Scott Thompson disaster is a reminder that media companies such as Yahoo are often truly incompetent when it comes to something they should theoretically know better than anybody: dealing with the media in times of crisis.” — Time

“There are around 70 media people registered to cover ACTU Congress – and both Sky News and ABC24 will be covering some of the proceedings of the ‘Workers’ Parliament’ live.” — ACTU

Another high point in The Australian’s love affair with Twitter (from the print edition, Oct 27th, 2010). They deleted the first part of it online.

“TWITTER has become the dunny-door graffiti of the digital age, adding precisely nothing to the sum of human knowledge.

So why is it that the ABC has opted to include it in the broadcaster’s serious current affairs offerings? This week, as always, unattributed commentary scrolled across our screens as John Howard answered audience questions on Q & A. Supporters see it as democracy in action, but the ABC would be better off leaving viewers with a blank space than dignifiying this gratuitous feedback.”