At last, Egyptians can vote for a civilian president

Egyptians love to follow a leader but one can’t help feeling a little bit sorry for the next one, writes Vickie Smiles, a freelance writer in the Egyptian city of Alexandria.

Egypt might have a new president next week if one of the candidates wins more than 50% in the first round of voting on May 23-24.

At this stage the only contenders would be Amr Moussa, former Arab League chief and a foreign minister under Hosni Mubarak, and independent Islamist candidate Abdel Moneim Aboul Fotouh. If neither grabs half the vote in the first round, the top two candidates, who may well change in the next 10 days of campaigning, will battle it out in the June 16-17 run-off.

Topping the polls, Moussa’s name recognition has so far been a big plus. He was a popular foreign minister and became more so when in 2000 the Egyptian singer, Shaaban Abdel Rahim, released a song titled I hate Israel but I love Amr Moussa. But Fotouh is catching up quickly.

At his dramatic campaign rally in Alexandria, he stepped on stage to fireworks, beaming from an endorsement by political activist Wael Ghonim, the former Google executive whose Facebook page “We Are All Khaled Saeed” helped spark the revolution.

Moussa and Fotouh have kept their lead in the polls for the past few weeks, followed by Mubarak’s last Prime Minister and former air force general Ahmed Shafiq and Muslim Brotherhood candidate Mohamed Morsi. Shafiq had been under threat of disqualification over a law banning ministers who had served Mubarak in the past 10 years but held on after an appeal and challenge to the ruling.

Field Marshal Tantawi, who has been de facto president since Mubarak was forced out after last year’s January 25 revolution, says he will leave immediately if there is an outright winner in May. If not, he’ll return to barracks as planned on July 1.

Watching Moussa and Fotouh go head to head last Thursday night in the first-ever televised presidential debate brought some respite from an ugly riot a week before in Cairo’s Abbasiya district, which left 14 dead and hundreds injured and arrested. The debate should have run the same week but the private satellite stations, that chose Moussa and Fotouh on the basis of their rankings had to reschedule after campaigns were suspended in sympathy. While neither won the night, the four-hour spectacle clearly gave them an unfair advantage, especially with Egyptians living abroad who began voting the next morning.

Nevertheless, other candidates are gaining maximum exposure with endless hours of TV interviews and talk show appearances: three hours of Shafiq one night and then the same for labour activist candidate Khaled Ali the next. Voters are also being treated to slick TV advertisements, serious or creative like the puppet one from team Fotouh that is apparently based on the show  El-Leila El-Kebira (The Big Night), by the famous Egyptian poet Salah Jaheen.

While it’s too early to pick a winner, one thing is certain: Egyptians are blown away by the fact that after 60 years of being ruled by generals they can cast a vote for the first civilian president in post-Colonial Egypt. They may not like all the candidates but they can have another go in four years. Presidents are also limited to two-terms so a Mubarak clinging to power for 30 years can never happen again.

Voters are just beginning to polarise as the longer the campaign lasts, the greater the disappointment. Some of the criticisms levelled at the candidates are:

Moussa, the secular favourite, is too old at 75 and is really a Mubarak man even though he was critical of the government and left the ministry to join the Arab League. He was foreign minister for 10 years so was complicit in a corrupt government. He could have resigned.

Fotouh, the Islamist favourite who’s popular with both liberal and young voters, is not as moderate as he says after gaining the support of leading ultra-conservative Salafists. He was expelled from the Muslim Brotherhood for wanting to be president, but is really one of them.

Shafiq, perhaps too old at 70, is a holdover from the last regime and a favourite of the military. He’s been too close to Mubarak and will take some of the secular votes away from Moussa. If the secular vote is split there’s more chance of an Islamist president, which would be too much after the Muslim Brotherhood and the Salafists won the majority of seats in last November’s parliamentary elections.

Morsi, nicknamed the “spare” for replacing the Muslim Brotherhood’s preferred candidate, Khairat Al-Shater, is becoming too conservative in an effort to win back some of Fotouh’s Salafi supporters. The more charismatic Al-Shater, disqualified for time spent in prison, will run the show anyway or the whole organisation will be “president” despite Morsi saying he will resign from the Muslim Brotherhood if he wins.

Khaled Ali, too young at 40 and politically inexperienced despite his runs on the board in achieving labour reforms.

Hamdeen Sabahi, the independent left-wing candidate who is very strong in the rural and coastal areas north of Cairo, has little governance experience and flip-flops over how he would approach the military. At first he was hesitant to criticise SCAF (The Supreme Council of Armed Forces) then said it should be accountable for the deaths of protesters during the waves of violence last year.

Sabahi had one of the biggest posters of the campaign in Alexandria until the building owner made him pull it down. 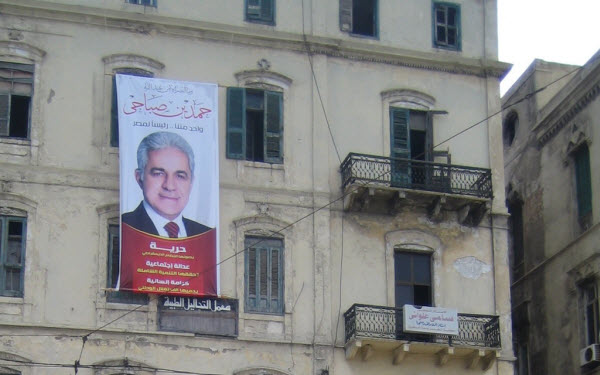 Hamdeen Sabahi: poster up, then down again

All the candidates want to talk about security and honouring the peace treaty with Israel but none are brave enough to tackle the military and all the chaos of Tantawi’s transitional government. Some candidates are even expected to appoint a military man as Minister of Defence.

The recent chaos in Abbasiya followed a sit-in outside the Ministry of Defence by supporters of Salafist leader Abu Ismail, who was chucked out of the presidential race weeks ago because of his late mother’s US citizenship.

Abu Ismail wasn’t even there but as the sit-in turned nasty and began to irritate the military more protesters arrived followed by thugs armed with guns and knives. Nobody knows who did the killing but many blamed the military for the tear gas, water cannons and live ammunition, apparently fired at protesters.

Peaceful rallies are a thing of the past and protesters are now being warned to stay away if they find themselves surrounded by people they don’t know or don’t want to know. It’s just too dangerous.

While Abbasiya highlighted the fragile nature of the transition, it also fuelled the increasing paranoia about security, which is such a “big sell” that other issues are neglected. Forgotten is the yet-to-be written constitution, the power of the military post-election and the division of power between the president and a parliament dominated by Islamists.

Will the new president find the will or the way to demilitarise the state and make the military a transparent organisation?

Egyptians love to follow a leader but one can’t help feeling a little bit sorry for the next one!