Abusive emails and accounts of threatening behaviour towards climate research staff have been released by ANU following an FOI request. Graham Readfearn reveals what they say.

Abusive emails and accounts of threatening behaviour towards climate research staff have been released by the Australian National University, following a Freedom of Information request.

The Canberra-based university has decided not to appeal against a Privacy Commissioner’s finding that 11 documents unearthed through a FOI request should be released.

The FOI application, lodged by Sydney-based climate sceptic blogger Simon Turnill, requested any records of threatening or abusive correspondence sent to six named scientists between January and June 2011. ANU originally blocked the request, which came after a Canberra Times article reported that more than 30 climate scientists at universities across Australia had been subjected to a sustained hate campaign.

The names of staff members and names of the people sending the correspondence have been blacked out by the university, which said the release of the documents risked ANU staff suffering further abuse.

Crikey revealed earlier this week that staff at ANU’s Climate Institute were moved to more secure premises in April 2010, some eight months before the period covered by the FOI request. That decision came after two incidents where “aggressive” members of the public had entered institute premises.

Australia’s chief scientist Professor Ian Chubb told Crikey that he hoped scientists would “not be silenced” by the email attacks. Chubb, a former Vice-Chancellor at ANU who decided to move staff to more secure premises, told Crikey: “I had anxious staff — made anxious by some of this stuff — and I feel I had a duty of care to them.”

One email released is a report from one ANU staff member to another, describing an incident at a university-run public engagement event shortly after staff were moved.

The email recounts the words of an ANU staff member who was present at a table where a climate sceptic had become frustrated by an earlier speech given by a climate scientist. It reads:

“Moreover, before he left, he came to the Fri dinner and showed other participants his gun licence and explained to them how good a sniper he is. Because he didn’t attend day 2 he will not be allowed to attend the final day. I will be notifying security to be on hand in case he turns up and causes a problem.” 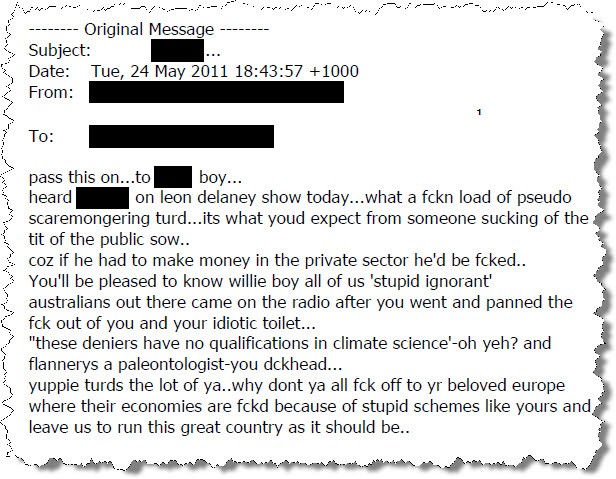 In another email, a correspondent writes:

“What a fckn load of pseudo scaremongering turd… at youd expect from someone sucking of the tit of the public sow.. coz of he had to make money in the private sector he’d be fcked.. You’ll be pleased to know willie boy all of us ‘stupid ignorant’ australians out there came on the radio after you went and panned the fck out of you and your idiotic toilet.”

The email appears to be referring to an appearance on a radio show by Professor Will Steffen, the director of the ANU’s Climate Institute. The email concludes:

“yuppie turds the lot of ya..why dont ya all fck off to yr beloved europe where their economies are fckd because of stupid schemes like yours and leave us to run this great country as it should be.” 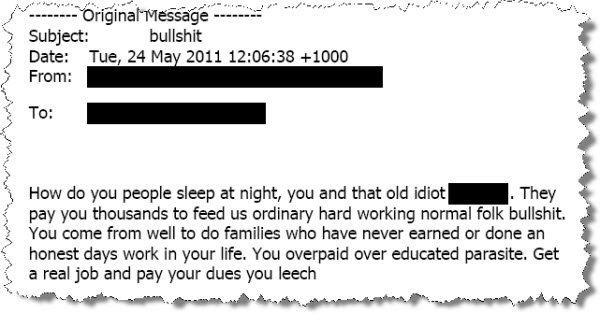 Another email calls its recipient an “overpaid over educated parasite” and calls the scientist a “leech”.

This isn’t how scientists and the public should speak to each other, says Australia’s chief scientist. “I have said in multiple speeches that there’s a need for a more reasonable and civilised debate from both sides about what is a very important topic,” Chubb told Crikey. “There should be no abuse at all in this debate because it’s too important. We don’t need the sort of scaremongering stuff, particularly of the kind put out by the Heartland Institute recently.”

Chubb was referring to a billboard advertising campaign by US free market think-tank the Heartland institute, in which it used a picture of the so-called Unabomber Ted Kaczynski beside the words “I still believe in Global Warming. Do you?”

The advert was used to attract attention to Heartland’s upcoming climate sceptic conference in Chicago, which has three Australian organisations — the Australian Libertarian Society, the Carbon Sense Coalition and the new Australian Taxpayers’ Alliance — among its sponsors.

Chubb added: “My message to the scientists is to not be silenced. It is important that they get their message out there. I hope scientists continue to put the line carefully and ethically and seriously and that any alternative views can be debated by those that know what they are talking about.”

An ANU statement released with the emails said the university had been advised the release of the emails “would lead to an increased risk of harassment” and it had declined the FOI request on these grounds.

“ANU has a duty of care to its staff and students and we note the finding of the Privacy Commissioner: ‘In my view there is a risk that the release of the documents could lead to further insulting or offensive communication being directed at ANU personnel ,” said the statement.

“However we have chosen not to appeal the decision of the Commissioner and are releasing the documents with information removed that would identify those sending or receiving the emails, as per the Commissioner’s decision.”

Interesting Crikey. As you and your readers know. I have published on this site a link to my published allegations identifying politicians who have shown no interest in the NSW coroner being misled by my local council. Not one of your people at Crikey have contacted me to question my often published position and often published links to allegations our elected reps accommodate systemic corruption. Edward James Central Coast NSW 0243419140 near where Craig Thomson resides {:-)

Organisations like the IPA and Heartland Institute pitch their arguments directly at people who regard “overeducated” as a term of abuse.

Your wasting your time Edward. This site is not interested in a balanced argument or outlook. In my opinion it is nothing more than the propaganda journal of the Labor/Greens Coalition.
I do believe that there is climate change, however when the head of the commission has been proven to have been misleading and telling downright lies, who do we “ordinary” Australians believe.
I have a degree in business not in climate science and neither does Tim Flannery.
So who do we believe.
The emails have proven to have not been as abusive and threatening as reported in the media and the alleged death threats; come on. It made for good news.
Again when distortions like this occur how can you believe the climate scientist and the Climate Commission.

What is it about climate change that brings out the rage. There are certainly many more issues one can think of that might rate this angst such as lies about WMDs, corruption, peodphiles, sexual abuse, children in detention, persecution of organisations like Wikileaks, Bradley Manning, but climate change seems to have a much more heightened and polarising effect.

Whether one agrees or not with a carbon tax or the causes of climate change, the tax will have negligible effect, certainly no more than any other tax like the GST. Also you can just change your habits and use less of whatever it is that incurs the tax.

What is it with the mentality that thinks it is all a global conspiracy. For what purpose. I need to be enlightened.

Given News Corps preemptive apologetics for the haters, i think ALL climate scientists who have received abusive comms should publish all of them. That would both prove the problem, give the AFP plenty to work with, and demonstrate what sort of people most of these deniers are. I read above that ANU are worried about further targeting but that is going to happen anyway; passive good manners are not the way to deal with bullies.