Lib email ‘cooked books’ … not a chance for Greens in Batman …

From the Crikey grapevine, the latest tips and rumours … Family affair in Queensland bureaucracy. There’s a prominent Brisbane family that seems to have four of its members on the public payroll. Do they all deserve to be there? AC/DC going to the top (of Swanston). Rumours are still swirling around AC/DC and a possible […]

Family affair in Queensland bureaucracy. There’s a prominent Brisbane family that seems to have four of its members on the public payroll. Do they all deserve to be there?

AC/DC going to the top (of Swanston). Rumours are still swirling around AC/DC and a possible appearance at the AFL grand final this year. They’ve already learnt their It’s A Long Way To The Top anthem to the code for marketing, and now we hear a re-creation of the original film clip down Melbourne’s Swanston Street during the grand final parade may be on the cards. “Only hitch is getting Bon Scott back on the bagpipes,” says our source. Good luck with AC/DC performing Long Way to The Top at the grand final.  The band haven’t performed this song since Bon Scott died.

Lib email: ‘cooked books’ in budget. Chaos! Tricky accounting! No direction! The Liberals deliver their budget briefing via an email to members yesterday … 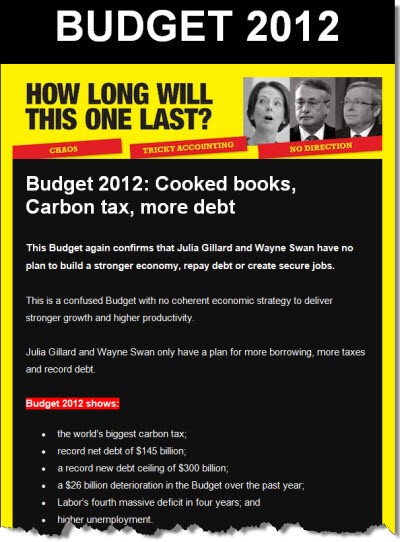 Greens for Batman? Not a chance. As Labor continues its slide in the polls and the Greens rally around their new leader, there’s been renewed speculation of a strong run from Christine Milne’s mob in the Melbourne seat of Batman. Social worker Alexandra Kaur Bhathal won a big chunk of votes at the 2010 poll and Martin Ferguson is on the nose with many. But a local pollster reckons it’s not on:

“The seat is a large one, stretching from Westgarth way out into Reservoir, including notoriously lefty suburbs like Northcote. I was a scrutineer at a booth in Preston at the last election. To say it was solidly Labor is an understatement. The pile of Martin Fergusson’s votes towered over all the other piles. The Greens did displace the Libs as second party, and the Lib preferences did eventually flow to them, but not enough to make a difference. While there is a strong Green vote in the southern third of the seat, and a knot of Liberal booths in the Fairfield area, the rest of the seat in Preston and Reservoir is still strongly Labor. This may change over time; Preston and Reservoir are getting slowly gentrified and enough same-s-x couples have moved further north that it’s now jokingly referred to as ‘Leservoir’.

“But the demographic is such that it’ll still be the safest seat in the country at the next election. It’s still largely upper working class, migrants and older, retired Greeks and Italians. Having said all that, Martin has not made himself popular with his strong support of uranium mining and brown coal exporting — including with me, and I’m a member of his local ALP branch — but not enough to have him bumped from his seat.”

Political donations from builders/bikers. Did the NSW government really take donations from a construction company with links to an outlaw motorcycle gang?

Sighs of relief in the capital. A good citizen of Canberra responded to our frantic plea to find John Quiggin’s black overcoat after the budget fatigued economist mislaid the item of clothing somewhere between the Crikey post-lock up meal and the Kennedy Room. The tipster suggested — “it is covering the black stump”. Not so, reported Quiggin, in happy news the coat has been located and “… my mum is going to pick it up for me … Good to see some budget stories are important enough to last to the third day!”

A Victoria Cross for Simpson? According to the 3AW Rumour File: “Caller Rob says as part of the Anzac centenary, the federal government will retrospectively award Victoria Crosses to several recipients including John Fitzpatrick-Simpson.” Of Simpson and the donkey fame, that is. Now that would be something.

Cash dries up at radio network. Which big radio group is months behind paying some of its suppliers?

How does Dawn know where we live? Coles aren’t missing many in bombing out their new Flybuys cards to every man, woman and child. But just how they’re getting the information is an interesting question. One mum offers some interesting clues:

“My daughter yesterday received such an offer. She has recently (last year) returned to Australia and is living with us. She has never used the Flybuys system before nor does she have any co-branded credit cards, only her standard Visa card. She is now employed in a high-security level position in the Commonwealth government and was concerned to see that Coles had obtained her current name and current/our residential address. When Coles was asked how they obtained her name and current address they advised that it was provided by ACXIOM, a Sydney-based database marketing company, and from such organisations as Australia Post and the do-not-call register!”

I’ve actually registered my cards with a couple of names of members from the Wesfarmers board and put the address as 800 Toorak Road. Not sure what to purchase with them now – probably sanitary products….

I think the Greens will take a heap of Labor lower house seats, as they will not finish last (of the majors) – Labor will so those preferences will get the Greens up

But now I am confused Suzanne, you have stated in many, many posts how the Greens are doomed and will be run out of parliament (being the dirty socialists that they are). Now they are not? What happened? Did your crystal ball break?

The Do Not Call Register never discloses personal information about people who have registered their numbers to database marketing companies. The Do Not Call Register only uses the information it collects from people registering their numbers, such as name address and telephone number, to operate the Register or for handling complaints against telemarketers.

For years people said that Melbourne was ‘solidly Labor’ and it was one of the safest seats in the country for a long time. Over time that changed. Not only the demographics of Melbourne are changing, but also people’s political views. People don’t see the ALP as the only left-wing alternative anymore and even if the Greens don’t take Batman at the next election, they will take it eventually.