The ABC announced this morning that 7.30's host, Leigh Sales, will be returning to the program after six months maternity leave. Plus other media news of the day.

Sales back on ship. The ABC announced this morning that 7.30‘s host, Leigh Sales, will be returning to the program after six months maternity leave. She will be back on Monday fortnight, May 28.

That will see stand-in host Chris Uhlmann returning to his regular role as 7.30’s political editor in Canberra, with Heather Ewart back to Melbourne as “national affairs correspondent”. Uhlmann has been host since the end of January when Sales went on leave. — Glenn Dyer

Sheridan’s Israel grovel. Never apologise, never explain is the motto of The Australian — except of course in the case of Israel — whose journos regularly get free junkets from the Israeli government. In this case the apologist was Greg Sheridan, who went to the extraordinary lengths of appending the apology to his latest, unrelated, story:

“Many readers were surprised, as I was, to read a headline in The Weekend Australian: Living under the cloud of Israel’s cruel apartheid. The headline did an injustice to the story, which only used the word apartheid in reporting the comments of one person who was interviewed.

“The editor of this august journal has confirmed to me that the headline was a mistake, the sort that creeps into newspapers where staff are always battling the pressure of deadlines.

“The Australian believes, and certainly I personally believe, the word apartheid has no application to Israel, which is a democracy in good standing, which extends basic rights to all its citizens, whatever their race or creed. Too often the misuse of such a word is designed to demonise Israel, wholly unjustly. In this case, it was just a mistake.”

God forbid. The only people who call Israel an apartheid regime are those such as Desmond Tutu, who has said that the Palestinians have it worse than the South African blacks had (which earned from Alan Howe a remark that suggested Desmond Tutu thinks the Jews are dogs).

Why are all these guys so batshit crazy about Israel? Because following a decade of failure by the neocons, Israel is the only place they can identify with — even though it’s as corrupt and confused as everywhere else. But dreams are more important than facts — hence Sheridan’s grovel. Still at least he’s doing what he loves. — Guy Rundle

Front page of the day. As John Travolta faces off with his accusers over his alleged Saturday night fever masseuse s-x scandal … Why are we bothering? … we’ll leave the tabloid puns to the professionals: today’s NY Daily News: 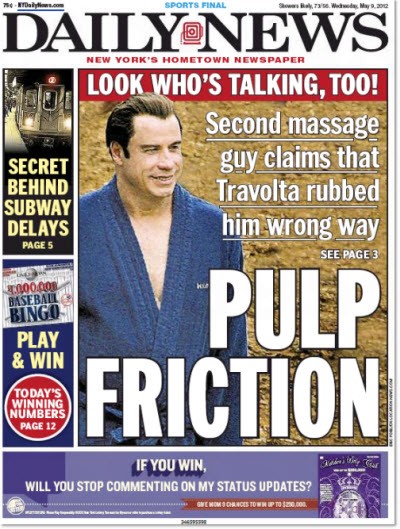 AAP to complain to Treasury over leaks

“AAP has accused the government of cynically attempting to control the media following budget leaks to television and radio.” — The Australian

Nine problems stopping The Global Mail from getting readers

“While it’s a shame The Global Mail has failed to make an impact on the media landscape, the signs have been there for some time. Regardless, here are nine areas they can easily start to address …” — mUmBRELLA

“The laws revealed in the Queen’s speech will make it more difficult for people to bring libel claims in the UK unless they live here or another European Union state. ” — The Telegraph

“HRN radio’s news manager Alfredo Villatoro was abducted on his way to work in the capital, Tegucigalpa, on Wednesday morning. ” — BBC News