"And in today's effort to energise a disillusioned base, Barack Obama will be opening a Pinterest account," tweeted our reliably cynical Bernard Keane.

“And in today’s effort to energise a disillusioned base, Barack Obama will be opening a Pinterest account,” tweeted our reliably cynical Bernard Keane this morning in reference to the US President’s endorsement of same sex marriage.

And ignite his base it did. Check out this chart from Mashable: 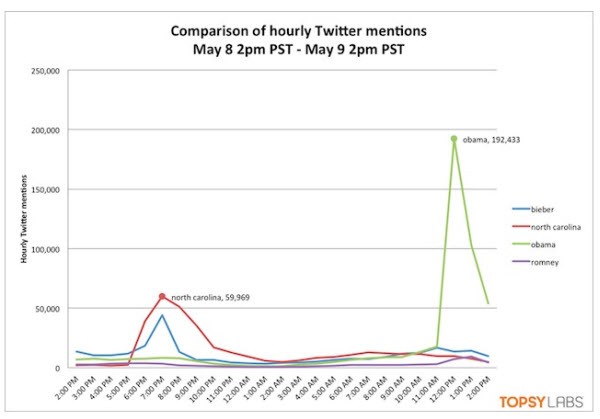 An email from the President has just hit supporters’ inboxes. It begins: “Today, I was asked a direct question and gave a direct answer: I believe that same-sex couples should be allowed to marry.”

It wasn’t that simple. As Chris Weigant at The Huffington Post points out: “What we just witnessed, for roughly the past four days, was not a ‘breaking story’ or even an ‘evolution’ of any sort. What we just witnessed, capped this morning by President Barack Obama’s statement of support for gay marriage, was nothing more than the introduction of a new (political) product.”

Consult the timeline over the last week for how we got to this point: the firing of a gay Romney staffer, an apparent Biden boo boo, North Carolina voting against gay marriage (again) … all of it amounting to a “watch this space” solid gold advertising 101 moment for the President. Cue the wonks now debating whether getting his young base to pay attention again will be enough to counteract a similarly re-energised conservative moment with fresh angry blood, not to mention the black vote.

But does any of it matter? Does it make the President’s statement any less important? Isn’t this a win/win? A momentous statement for gay people everywhere, clever politics, and the trickle down effect of placing pressure on political leaders around the world?

We can think of another political leader who could do with some ignition, or at least something approaching a warm glow … She’s already quashed that notion, though.

Not even for the chance to get some young voters to sit up and take notice? At first glance, it seems like a no-brainer — politically and pragmatically. Then again, Julia Gillard’s team would need a savvy roll-out Obama-style, a “journey”, an “evolution”, in order to dodge the charges of flip-flopper/political opportunist/Juliar. Maybe they’ve got enough on their plate for now …

I wonder though why the ABC felt the need to have their journalists interview each other to prattle about what it meant after we listened to the interview.

It’s boring and tiresome and I suspect Obama does not give a rat’s arse what our ABC have to say about his personal decisions.

I don’t know why our Labor government won’t just go for it on Gay Marriage. There are some socially conservative Labor members who would be troubled, but a conscience vote will take care of that. I am sure that Julia’s stand on Gay Marriage is merely one of political convenience, but why not think outside the square. Supporting Gay Marriage rights would not lose Labor one vote and it may pick up some votes from real ‘liberals’ who vote ‘Liberal’. Labor could wedge the Coalition for a change. Those who think that ‘gaity’ is an abomination or that they or the nation will somehow be seriously harmed if we allow gays rights accorded to everyone else already vote conservative / right wing. There would be a lot of noise from the usual suspects because of Julia’s alleged ‘flip flopping’ – Labor will be damned in the media, but that’s just business as usual.