The Australian's front page -- depicting a Soviet realist-style Wayne and Julia marching before an enormous hammer-and-sickle flag-- is another chapter in the long discussion of what-the-hell-happened-to-Bill-Leak? Plus other media news.

Soviet bunker harbours fading cartoonist. The Australian‘s front page — depicting a Soviet realist-style Wayne and Julia marching before an enormous hammer-and-sickle flag, in an Occupy T-shirt before a group of marching workers — is another chapter in the long discussion of what-the-hell-happened-to-Bill-Leak? 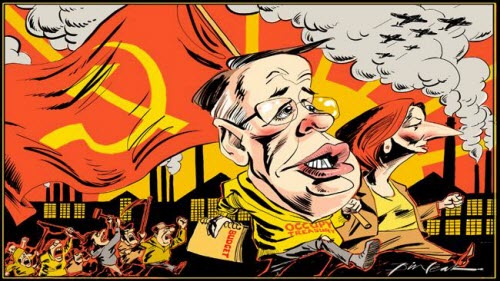 Is the graphic meant to be some arch self-critique of The Oz‘s hysteria about Red Julia, etc? Or is it, as other cartoons of his have suggested, an increasing willingness to toe the company line? As satire of either Labor or its rhetoric, it misses the mark absolutely, and the budget itself had tepid each-way reviews from such radical outfits as the Business Council of Australia.

What’s going on? Has Leak, sadly, become one of Chris Mitchell’ s minions? Or are we all missing some subtle gag? — Guy Rundle

ABC’s X-rated budget coverage. We’ll tip out hat to Reddit for providing this … err, interesting snapshot of the federal budget coverage by the ABC, as it read on one user’s TV guide: 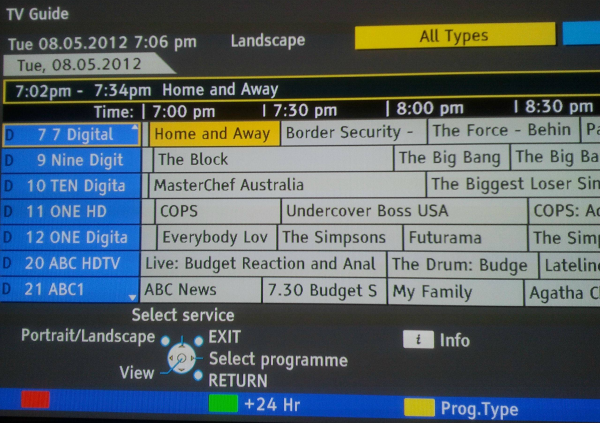 How well is Kyle really doing on radio? A report on The Sydney Morning Herald website yesterday on the Sydney radio ratings claimed Kyle Sandilands and Jackie O had a poor result in the third radio ratings for 2012. It stated:

“The Kyle and Jackie O show’s audience share had fallen over the past two surveys, first shedding 1.1 per cent in the first ratings period of 2012, before a further fall of 0.4 per cent between January 29 and March 17.

“While the breakfast show retains top spot in the FM bandwidth, and has halted the decline, the 0.1 per cent increase they have recorded in this survey will hardly be cause for celebration. Particularly as the network overall has recorded a jump, including increases of 3.2 and 3.0 per cent in the 10-17 and 18-24 demographics.”

It’s a pity the writer didn’t look at the actual demographics and audience data, which is issued after the ratings are released. They show that far from losing listeners, Kyle and Jackie O added listeners in the ratings period, especially in the under-40 group. They lost them in the over-40s groups and Austero would not be sad to see them depart.

Well, there was a change of heart at the The SMH overnight and this morning a new tune appeared:

“The media can huff and puff all it likes but it seems no one can blow down the house of Kyle Sandilands. Despite provoking a storm of protest with his s-xist comments, the latest ratings confirm he and his on-air sidekick Jackie O are as popular as ever.”

The paper also missed the solid performance of the ABC’s 702 station in the Sydney market in the third survey. — Glenn Dyer

Front page of the day. The English version of the Greek newspaper Kathimerini leads today with the news that new elections loom for Greece as a unity party between Syriza, PASOK and New Democracy appears unlikely to go ahead: 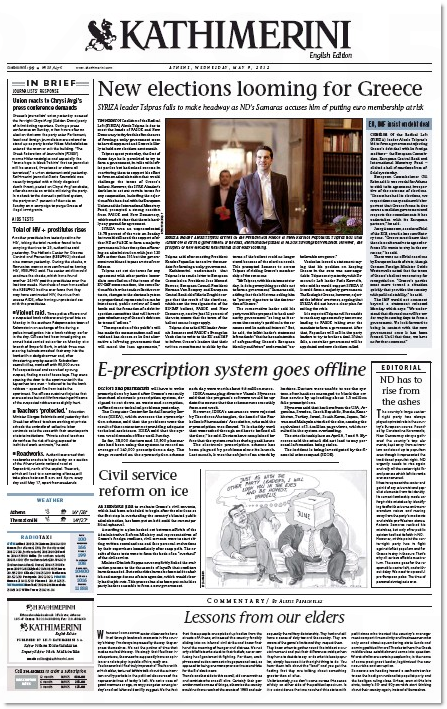 Typo of the Day. Here at Crikey we don’t really like to get stuck into other newspapers about typos lest we be judged (glass houses and all that) yet, as discovered by Alex Ogle and posted on Twitter, a typo in today’s Washington Post  — the misspelling of English actor and Sherlock star Benedict Cumberbatch as “Bandersnatch Cummerbund”  — is rather hilarious: 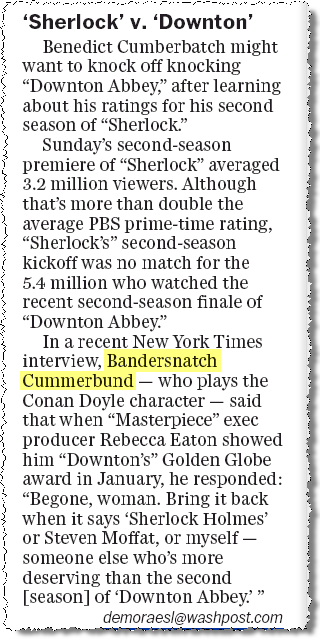 “David Cameron texted Rebekah Brooks in the week she quit as News International’s chief executive over the phone-hacking scandal to tell her to keep her head up, it has been claimed in an updated biography of the prime minister.” — The Guardian

“Former News of the World editor Andy Coulson has been granted permission to appeal a high court ruling that News Group Newspapers did not have to pay any legal costs he may accrue in relation to any potential criminal proceedings.” — journalism.co.uk

“China has stepped up its censorship of foreign journalists with Arabic news service al-Jazeera forced to close its English news bureau in Beijing after its reporter Melissa Chan was expelled, the first foreign correspondent to be cast out since 1998.” — The Australian

Yahoo’s fall from grace, by the numbers

“Yahoo, a darling of the dotcom era, has had a rough transition into the social media age. As the following infographic shows, the company’s performance has suffered particularly in the past eight years.” — Mashable

“Any device connected to the internet such as a computer, smartphone or tablet could soon have its web history logged and retained for up to two years by telecommunications companies for law enforcement purposes under reforms being proposed by the Gillard government.” — The Sydney Morning Herald