Crikey media wrap: Welcome to Wayne Swan's "cash splash" budget, as the papers have dubbed it, although it also promises to return the budget to surplus for the first time since the 1990s.

Welcome to Wayne Swan’s “cash splash” budget, as the papers have dubbed it, although it also promises to return the budget to surplus for the first time since the 1990s. Here’s a look at how the commentariat viewed Swan’s 2012-13 budget: 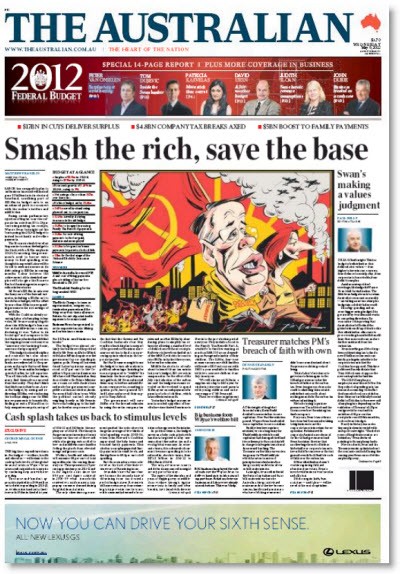 George Megalogenis,’Income taxes get Swan’s surplus over the line‘

“At some point, political parties and the electorate will have to come to an understanding. Either existing lines of government spending must be erased to make way for social spending to cater for an ageing population, or Australians will have to suck it up and pay more tax. Tony Abbott thinks government is just a shout or two away — stop the new taxes, end the waste.”

“Julia Gillard is right. This is a budget of redistribution that defines Labor values — from higher to lower income earners, from defence to social policy, from corporates to households, from deficit to surplus.”

“Tony Abbott is now faced with the invidious choice of opposing measures which will alleviate the cost of living pressures on families which he has campaigned on so relentlessly for years.”

“Political salvation is what Julia Gillard seeks and Wayne Swan has done his level best to make it happen in this year’s federal budget. Relying on the treasurer to save the prime minister, what could possibly go wrong?” 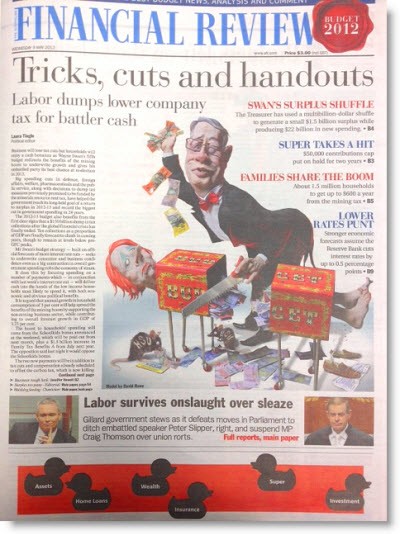 “The business community doesn’t need to read the fine print of the budget to get the message.”

Laura Tingle, Scope for Labor to rebuild stocks with voters‘

“Experience and pragmatism see Swan and his colleagues prepared to dump their own initiatives – some even before they hit the statute books – and cobble together new strategies that maximise their chances to turn the pressure onto the Coalition about its alternative economic strategy.”

Alan Mitchell, ‘A surplus too small, at the wrong time‘

“Should the government be tightening fiscal policy when large chunks of the economy are effectively in recession and unemployment is about to rise? Ideally, no. Yet, with the terms of trade barely off their historical peak and the economy still close to full employment, obviously the budget should be in surplus.”

Editorial, ‘Too many tricks and handouts‘

“The nation’s finances are not in as good a shape as Labor would have us believe.” 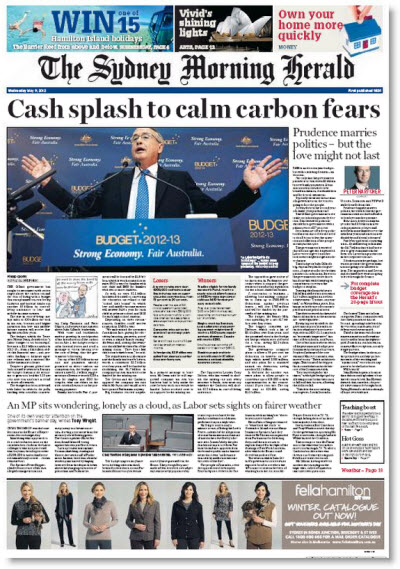 Ross Gittins, ‘A dash of sugar and spice, but a sour taste for wealthy‘

“If you are having trouble seeing the horror budget we were told to expect, that’s according to plan. This government has always wanted to be tough in principle, but never in practice.”

Ross Gittins, ‘This budget is too good to be true‘

“This budget is not as good as it looks, but nor is it as bad. It’s too good to be true.”

“Opposing the payments at the centre of this budget would mean the Coalition has calculated that not even cash can trump the Gillard government’s lack of credibility.”

“But hauling the budget back into the black and easing the concerns of Labor’s traditional voter base comes at a heavy cost for the corporate sector.”

Richard Willingham, ‘The budget: the winners and losers‘

“Big business is a major loser with a promised cut to the company tax, to be fuelled by the mining tax, scrapped. The government blames the opposition and Greens for blocking the cut.”

“Here, the best that can be said is that the budget gives Gillard and Swan something to work with — a bribe that might halt the drift of blue-collar workers to Abbott and an economic strategy that might be seen as credible by the middle ground.”

“When Treasurer Wayne Swan wrote his controversial essay on the rising influence of vested interests he was laying the groundwork for a federal budget based more on politics than economics. Today, he took aim and fired a big dose of class warfare.”

“This budget is very much about one of the dark clouds hanging over the government. No, not Craig Thomson. Or Peter Slipper. The carbon cloud.”

“Federal budgets often contain mixed messages, or different messages to different groups, but most of those listening to Swan’s program for the year ahead can be excused for simply feeling confused.”

“Like John Howard, he has opted to boost middle-class welfare as a way of winning votes. The blunt political tactic behind this budget is to frame a hand-out that can’t be blocked – without major embarrassment – by the Coalition or the Greens.

“Wayne Swan’s fifth Budget is classic Howardesque giveaway of handouts aimed at returning vitality to the Gillard Government’s limp electoral prospects. There’s nothing like cold hard cash to sharpen punters’ minds. Hell, they might even be grateful for it.” 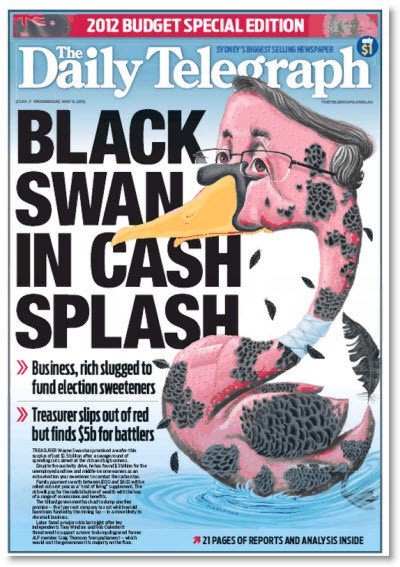 “Wayne Swan’s budget numbers are sexy, but are they sexier than the numbers in Craig Thomson’s union-funded credit card, or Peter Slipper’s taxpayer-funded limo bill? That’s the key political question that will help determine whether his fifth budget succeeds in turning around the fortunes of an ailing, flailing government.”

“Modern-day Robin Hood Wayne Swan has used his 2012 budget as a weapon to take from wealthy miners and give to needy battlers.”

“The cash splash thrown at families and low-income earners is all about trying to fix the Government’s massive deficit in the opinion polls which shows an unpopular Prime Minister leading the ALP on a path to its worst primary vote since 1934.”

Terry McCrann, ‘Budget 2012 steals with one hand, gives with the other‘

“This is not a Robin Hood budget – just lots of robbing the poor to give to the poor. Families will soon find the devil of this Budget is in the detail. 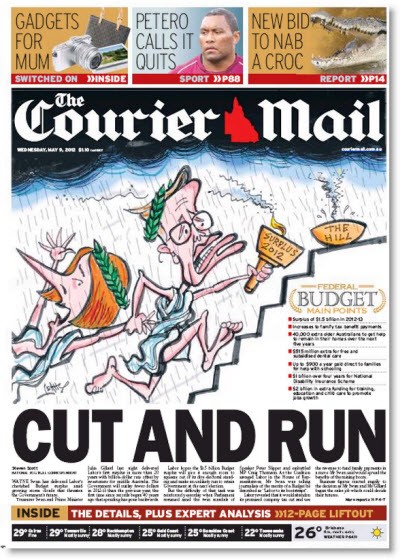 Dennis Atkins, ‘Will Wayne Swan’s Budget gamble pay off? Only time will tell‘

“If he achieves it — and we won’t know for sure until late next year — Swan will have pulled off the biggest economic gamble seen in decades. No nook or cranny of the bureaucracy was safe from the expenditure review commission’s razor — small programs and large got the treatment.”

“Mr Swan’s fifth budget, which he described as a ‘Labor budget to its bootstraps’, was heavy on measures to help families and contained a few key initiatives to support Australia’s 2.7 million small businesses as part of the Government’s ongoing efforts to improve relations with the sector.”

Ben Eltham, ‘Why Swan Deserves Kudos — And Won’t Get It‘

“It’s a measure of the parlous standing of the Labor Party in Australian politics that this budget will almost certainly not be seen as a triumph. But for Wayne Swan, at least, I think it is.”

Paul Kelly, ‘Wayne Swan’s making a values judgment’
“Julia Gillard is right. This is a budget of redistribution that defines Labor values — from higher to lower income earners, from defence to social policy, from corporates to households, from deficit to surplus.”
And that is wrong, why Polonius?