From the Crikey grapevine, the latest tips and rumours … Animal cruelty smear on board member. Someone is trying to smear John Falvey, an experienced corporate boss and greyhound racing administrator, who was named to the Racing Queensland board last week. Crikey received claims — along with a number of other media outlets, we believe — claiming Falvey […]

Animal cruelty smear on board member. Someone is trying to smear John Falvey, an experienced corporate boss and greyhound racing administrator, who was named to the Racing Queensland board last week. Crikey received claims — along with a number of other media outlets, we believe — claiming Falvey was implicated in animal cruelty cases in the Northern Territory. But there’s just no evidence — Falvey denies it, Racing Queensland have no knowledge of it, and a statement from the RSPCA sent to Falvey, and seen by us, states: “This is to confirm that RSPCA Qld has not had any validated complaint against yourself or animals in your care.” So who’s trying to stir up trouble?

Spin for Ted Baillieu worth $174k. A Victorian government watcher couldn’t help but draw a comparison between the 6600 job cuts from the public service and the recruitment of a new spinner for the Department of Education and Early Childhood Development. According to the job ad, there’s $174,181 (plus super) for the successful candidate. Tough to spin that.

Rumour mill ramps up on MP matters. The rumours about a certain MP’s infidelity just won’t go away. We reckon even if it’s true — and we’re yet to uncover any evidence — it’s not (yet) anyone’s business.

AAP journos see dollar signs in Canberra. Our budget battlers have to settle for a plate of sandwiches, unlike our colleagues at AAP who will be chowing down on this special federal budget cake. We’re told it’s to celebrate Swanny’s budget surplus (the icing recognises having the nation’s books back in the black) … 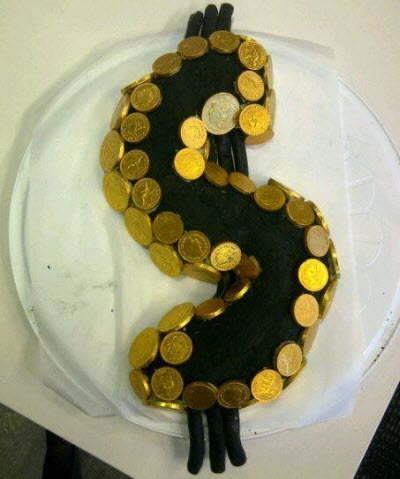 The Sky News cough and strained relations. Lewd gesture or coughing fit? That’s the question from the Sky News footage of sports presenter James Bracey chatting with Seven Sport reporter Jim Wilson. But there’s more to it than that, according to an anonymous Sky News employee:

“The pair had a massive falling out at the Olympic trials in Adelaide. Whilst both are known as being very ‘ambitious’, particularly the former, the word around the office is that James has been well overdue to be taken down a peg or two.”

Al Jazeera on Austar, now Foxtel? Austar carries English-language news service Al Jazeera on its pay-TV service, Foxtel does not. So, as one curious Crikey reader asked, will that change when the two providers merge later this year? Will Austar customers continue to receive Al Jazeera, given Foxtel’s long-held objections? We asked Foxtel those very questions — but didn’t get any answers: “Foxtel does not take control of Austar until late May. We will make further announcements on changes to our subscribers’ services in due course.”

Staff and students of the University may be aware of recent media reports that detail allegations of inappropriate behaviour at a camp organised by the Student Guild including alcohol abuse and binge drinking, peer pressure and bullying, and inappropriate s-xual behaviour.

Such behaviour is abhorrent and will not be tolerated. As a result, the University is implementing a set of strict rules for the conduct of student camps.

While there have been no official complaints lodged with the University, it has been made clear to the Student Guild that behaviour of this nature from UWA students will not be tolerated.

As you are no doubt aware, the Student Guild is established under the UWA Act as an autonomous body with statutory and financial independence from the University.

However, the University Executive has been in discussion with the Guild to implement a set of strict rules for the conduct for future camps to ensure the safety and wellbeing of all who attend.

The University’s wide-ranging response includes advice to the Guild that:

I have made it clear to the Student Guild that the University expects it to adopt a very strict approach to ensure future events are properly managed to ensure the safety and wellbeing of all who attend.

Acker Dacker for AFL Grand Final? From the 3AW Rumour File: “Caller ‘Grand final’ says the entertainment for the grand final will be AC/DC and then a post game concert.” It has to be better than Meatloaf …

Medich and co. short-changed in Sydney. The Sydney Morning Herald reported today that the Sydney eastern suburbs house of Ron Medich (currently of interest to NSW Police) is on the market at $40 million or better — a$15 million “discount”. That’s the tip of the ‘berg in the east, it seems. According to a local:

“One bank has 38 homes in the east, all multi-million dollar, where it is in possession and the owners are living in them paying rent, or are moving out. A well-known Sydney businessman who has moved overseas has his house in a harbourside suburb in the east on the market at $14 million (for six months now). He paid $10 million and the agent can’t get anyone interested at $8.5 million. Another house in the same suburb was advertised at the weekend and mentioned the fact that the bank was involved in the sale. The house was flooded with people looking for a bargain. Another house is on the market in the upmarket suburb of Paddington for $3.8 to $4 million. No sign on the front fence, just a small real estate agent sign when open houses are held. The agent inside has been lonely.”

Q: How do you spell wowser?
A: Vice-chancellor

Thank goodness these are all just rumours. There is no way that the Murdoch / Foxtel empire would do anything underhanded or illegal to get a story, let alone silence news services that they disagree with! I wouldn’t be surprised if Foxtel didn’t start running Al Jazeera stories on it’s entire network once the merger takes place. Rupert is pretty hot on quality journalism____

That cake looks a bit like a gilded turd! Edward James