Pell, the Archbishop of Sydney, appeared on the ABC’s Q&A recently for a one-on-one debate with athiest Richard Dawkins. During the show Pell said: “When in England, we were preparing some young English boys … for Holy Communion.” During the pause, members of the audience began laughing (others booed those who had laughed) and the Twitter world lit up.

A tweet posted by Deveny on April 10 showed a picture of Pell’s face surrounded by the first section of the sentence that he uttered on Q&A. 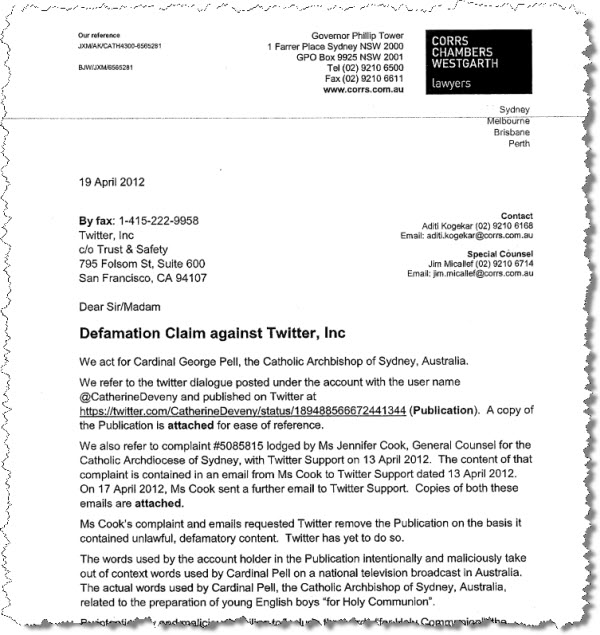 “Under Australian law, Twitter is jointly and severally liable with the account holder for the defamation. Also, under Australia law, damage to Cardinal Pell’s reputation caused by the post is presumed. In the circumstances, we demand that Twitter immediately removes the Publication. Should it fail to do so, we will hold it liable for the damage and harm caused to Cardinal Pell’s reputation.”

Deveny removed the tweet and placed an apology on her blog, although the legal letters did not demand that she do either. She also tells Crikey that she did not create the image — or start the internet meme — and that many others had also been tweeting the image.

Why pursue Twitter rather than Deveny herself? “My two guesses are that they didn’t want to appear as bullies and I don’t think they had any idea that I would get that correspondence,” Deveny told Crikey.

“I wouldn’t be surprised if they wanted to shut up a high-profile feminist, atheist who they’ve banned from speaking in Mildura and have possibly try to shut me down other places which I don’t have evidence of, but I have hearsay of.”

Back in 2010 Deveny was banned from speaking at a Catholic girls school in Mildura because she “held views that were not consistent with the Catholic Church”. “Everybody has the right to their reputations, but pursuing this makes them look kind of petty,” said Deveny.

Pell is also on Twitter under the username @CardinalPell, but he doesn’t seem to be an active user, since the locked account follows zero people and has only one follower (although he’s tweeted 19 times).

Deveny herself has received no contact or letter from Pell’s legal team. As Deveny writes on her blog:

“I apologize unreservedly for any hurt Cardinal Pell may have suffered from me tweeting a meme on April 10 that used his image and five words he said on Q&A the night before. Clearly it was significant enough hurt and embarrassment caused for him to lawyer up and spend the Catholic Church’s money to pursue defamation action against Twitter and me. There must have been deep deliberation over the decision to spend thousands of dollars of parishioners’ money on legal fees. Spending money that could have been spent feeding the poor, sheltering the homeless or alleviating suffering, instead of on defamation litigation, clearly illustrates how serious the breach I allegedly committed was in the eyes of Cardinal Pell.”

Deveny pointed us in the direction of other comedians who publicly criticise the Catholic Church, including Louis CK who has a skit about the church only existing because of p-edophilia and Tim Minchin with his popular tune Pope Song. She also notes that she’s highly involved with several charities either started or funded by the Catholic Church, including the Edmund Rice Centre and Griefline.

As well as demanding the offending tweeted be deleted, the legal letter also said Twitter must “not further publish any Twitter publication or publications substantially similar to the Publication”.

It would be “very difficult for Twitter to comply with any such order”, Mark Pearson, author of Blogging and tweeting without getting sued and a professor of journalism at Bond University, told Crikey.

Twitter can remove a repeat offender’s account, since users agree not to post offensive comments when they sign up. But is Twitter responsible for the content published by one of its users? “This is an area of the law that yet’s to be decided: the liability of such providers for material that they are hosting,” said Pearson.

“Traditionally there’s been a defence for what’s called innocent dissemination by such hosts — ISPs, newsagents and the like. The question [goes to whether] services like Facebook and Twitter have that immunity. It seems they would certainly in the United States [under the first amendment]. But whether that would also apply in Australia depends on such cases.”

Back in February Joshua Meggitt began pursuing legal action against Twitter after writer Marieke Hardy wrongly named the Melbourne man as being responsible for a hate blog against her.

This also isn’t the first time Deveny’s Twitter antics have got her in trouble, after tweets sent on Logies night back in 2010 saw her dumped as a regular Age columnist.

Deveny tells Crikey that although she has no plans to tone down her criticism of the church or anyone else online, she is now more aware of defamation law. Tonight she will be participating in a Wheeler Centre debate arguing for the affirmative for the topic “Freedom of Speech is Over-Rated”.

Way past time that these churches who have become political shills be taxed as money making concerns- the lot of them.

Would I as a property owner be exposed to defamation action if someone posted one of their comments on an external wall of my property? Edward James

It could have been worse for Ms Deveney… a less tolerant religious leader might have issued a fatwah.