A budget day of biblical proportions

March 22. The last time parliament sat. And lo, many things have come to pass since then.

And lo, a great many things have come to pass since then.

For there was Peter, and there was James, and Christopher who denied James thrice, until an email appeared, and Joe did then say, “Be quiet! Let’s stop talking about it now.” And Julia did deny Peter, and Craig was banished to the cross benches. And lo, after many moons the Fair Work investigation magically appeared, and Craig did look bad.

And thus, the coming question time, heralded by the supermoon, shall prove to be messy.

And Peter shall lead the procession into the chamber — sadly, without the pomp of previous entrances — and there shall be a great wailing and gnashing of teeth.

And in between Wayne’s budget shall be handed down tonight, and they shall speak of the “battlers’ budgets” and a “scandalous surplus” and “a surplus of scandal”, prompting the oracle Keane to proclaim, “you can’t move in Parliament House this morning without being hit by a shitty alliterative narrative”.

Brace yourselves for a budget day of biblical proportions. 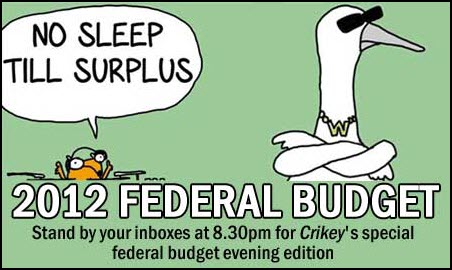 The “gourmet pies” are on order, the post-budget beers are on ice, and our band of crack correspondents are limbering up to enter today’s budget lock-up at 2pm, en route from the blood bath that will be question time.

Respected economist John Quiggin joins our Canberra correspondent Bernard Keane and senior journalist Andrew Crook to deliver all the news and analysis from Parliament House in a special federal budget edition delivered to your inboxes tonight. And not forgetting the fearless First Dog on the Moon, the lock-up’s (unofficial) cartoonist-in-residence, who will burst forth from the double doors at 7.30pm after successfully annoying the entire press gallery for five hours straight (sans internet).

Our special evening edition will land at 8.30pm AEST with everything you need to know about the numbers, the cuts, the initiatives and what it means for the Gillard government — plus a video interview with Keane and Quiggin immediately post lock-up.

And on Wednesday, all the stakeholder and political reaction — and gossip from our possibly hungover contributors — in a bumper post-budget edition.

What exactly are Biblical proportions? Are you going to go all cubits and gopher wood on us?

Not a sordid sex romp all over the country yesterday then.