The Department of Climate Change and Energy Efficiency have confirmed that they crafted and published a document after public outrage from teachers and scientists about Ian Plimer's climate change sceptic book aimed at children.

The Department of Climate Change and Energy Efficiency have confirmed that the decision to commission and publish a document called Accurate Answers to Professor Plimer’s 101 Climate Change Science Questions was made in reaction to outrage from teachers and scientists about Ian Plimer’s climate sceptic book aimed at children.

As Matthew Knott reported in The Power Index and Crikey back in April, a number of teachers and climate scientists were concerned that conservative think-tank The Institute of Public Affairs had paid for hundreds of copies of Plimer’s How to get expelled from school: a guide to climate change for pupils, parents and punters to be sent to schools across the country.

After teachers and climate change scientists “raised concerns with the department that this book was being provided to schools” the Department of Climate Change and Energy Efficiency put together a document rebutting each of Plimer’s 101 climate change questions, a spokesperson for the department told Crikey. “The accurate answers document was developed in response to these concerns,” they said.

The 41-page “Accurate Answers” document announces in its introduction:

“Many of the questions and answers in Professor Plimer’s book are misleading and are based on inaccurate or selective interpretation of the science. The answers and comments provided in this document are intended to provide clear and accurate answers to Professor Plimer’s questions. The answers are based on up-to-date peer reviewed science, and have been reviewed by a number of Australian climate scientists.”

The report then goes on to number each of Plimer’s 101 questions and answer them directly, noting which ones are “misleading” or “incorrect”. Each answer has facts and figures, graphs often appear and there are links to other scientific resources. 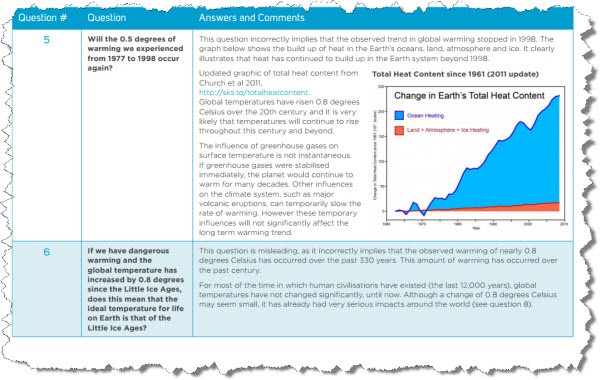 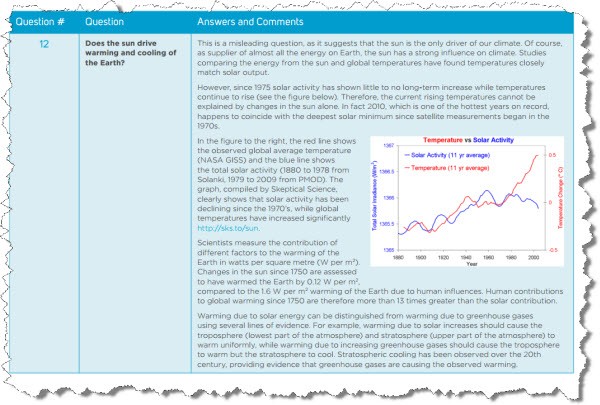 When asked if the department had ever rebutted a climate sceptics book in a similar fashion, the spokesperson replied: “The Department has previously provided general advice to address climate change misinformation presented in many documents, reports and books. The document on Professor Plimer’s book How to Get Expelled from School is a more detailed analysis of misinformation on climate change and is consistent with advice that the Department has provided on these questions previously.”

“It was important that someone responds to Ian Plimer’s book,” Cook told Crikey, noting that others had asked him to do a similar thing. “He [Plimer] wrote this book with 101 questions, it’s just a lot of work,” said Cook. “It’s a standard technique to generate an endless stream of questions. It takes a long time to go through and thoroughly answer them properly and make sure it is accurate.”

Cook estimates it would have taken “many months” for a document like this to be produced and checked by scientists.

John Roskam, executive director of the IPA told Crikey last month that Plimer’s book had been welcomed by schools: “A couple of teachers have told us they’ll use it and refer to it [in class]; others have said, ‘we’ll put it in the library,” he said. “Parents — even more than principals or teachers — have said they’re grateful for us getting it into schools.

“School kids are being indoctrinated by teachers every day. There should be two sides to the story and the science is far from settled.”

The document appeared on the department’s website last Wednesday — along with a list of other trusted sources on climate science, including the CSIRO, the Bureau of Meteorology, the latest Australian Academy of Science report and the latest review from the Climate Commission. No press release or public notice was sent out to coincide with its release.

Nature will deal with sceptics

Get Fact: how accurate is Ian Plimer’s new book?

Thanks John Roskam. Since it’s so important that there be two sides to every story and that they be given equal weight regardless of merit, I’d like to express outrage that my theory on smoking being good for you gets so little airtime. The fact that I’m paid by tobacco lobbyists has nothing to do with it. Our kids deserve to know the truth, which is being buried by sata n-worshipping communi st teachers and scientists.

That’s great news, excellent work by the Dept. It’s sad that it’s a couple of articles down from one about how bureaucrats are dispirited and demoralised because they’re never given any free reign.

It is quite problematic that the common perception “out there” – about who are the people who talk about the science of climate change, are:
1) a journalist with absolutely no science credentials (Bolt);
2) a British Lord with no expertise in the field (Mockton);
3) and an Australian geologist who sits on the board of directors of a number of mining companies, and who has never put out one peer reviewed paper on climate science. (Plimmer – I believe his last peer reviewed paper was about 10 years ago, on geology of course.)

We need some “heros” for the climate science side. I would like a few of the best of the best Aust climate scientists start to get known to the general public. I guess they need to be good talkers as well as researchers and thinkers….. and that is not always the combination found!

I wouldn’t p*ss on Joe Hockey if he were on fire, but I am really looking forward to the wholesale sackings at the Department of Climate Agitprop that will follow the next election. This leaves for dead John Howard’s misuse of public funds for political propaganda.

“School kids are being indoctrinated by teachers every day. There should be two sides to the story and the science is far from settled.”

So what’s the IPA’s version of the two times table?

The IPA has a policy and develops ‘facts’ to suit it.
Science has facts and develops a theory to explain them.

Must remember not to fly in an IPA designed aeroplane.