The federal budget looms, and as we've been hearing for weeks, it's going to be a tough one (with a few conspicuous sweeteners on the side).

The federal budget looms, and as we’ve been hearing for weeks, it’s going to be a tough one (with a few conspicuous sweeteners on the side.)

As we learnt last year in the wake of the ridiculous “an income of $150,000 doesn’t make me rich” argument which blitzed all other coverage in the wake of the 2011 budget, so much of the take-home message from Wayne Swan’s annual handout comes down to the disconnect between public perception and reality on the economy.

Essential Media delves into this disconnect today. On the first question, the public seem rooted in some kind of reality:

Q. Thinking about the state of the world economy, how do you think the Australian economy has performed over the last few years compared to other countries?

Around 66% believe the Australian economy performed better than other countries over the last few years, 16% say about the same and 15% think it has been worse.

So by extension, given Swan has been in the chair since the GFC hit, his government should gain some kudos for their handling of the economy — or if not that, get points on the question “if there was another Global Financial Crisis, which party would you trust most to deal with it?”.

If there was another GFC, 40% would trust the Liberal Party more to handle it. Only 31% would want Labor in charge. When a similar question was asked last week, the results were 27% Labor/43% Liberal.

This disconnect doesn’t just apply to the Labor government’s perception problem. As Keane and Cox discussed last week, it goes as deep as people’s ideas about their own personal wealth. And this neat little infographic from the Australia Institute illustrates the disconnect between the public’s perception of Australia as one of the highest-taxing regimes in the world and, again, the reality (we’re not). 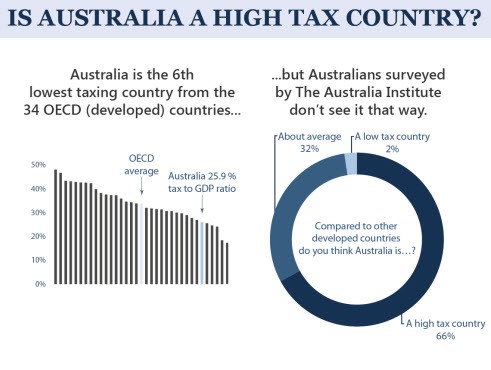 Good luck tomorrow Mr Swan, you’re going to need it — regardless of your bottom line, given that no one seems to be paying attention to any of it.

My message to the Coalition: your bright idea to slash funding for public education has worked!!! We are a dull, envious lot, prepared to believe the worst of the Government, so long as no one expects us to think for ourselves..

My message to the Government: Add to your legacy and boost spending for public education. No one will thank you for it, but it just might help to keep Australia average rather than the dunce in the future.

Well the media constantly tell them how hard up they are.

Maybe the voting public credit Costello and the Coalition for providing Swan with no government debt and billions in the bank.

I actually tried having this discussion with some work colleagues recently (in particular, that our tax vs. GDP ratio was one of the lowest).

I got a somewhat flippant reply that GDP is used as a bit of a “blunt object” when measuring such things.

So, then (serious question): What else is a fair measurement of our tax receipts compared to the rest of the world?

Though I have some confidence that the graph put up here takes variations into account, there are lots of inconsistencies between countries. For example is our medicare levy a tax? Are the people who buy private health cover to avoid it counted? If we were comparing ourselves to countries where all health is taxpayer funded, then we would need to.

Same with pensions. We are being asked to save for our own retirement through compulsory super. Other countries may tax at a high rate and then give a pension that is more generous than ours.

In fact as I write this, I am more sceptical that the graph really tells the story.