There is growing speculation among legal circles in the UK that at least three former News International executives may find themselves called to the Bar of the House of Commons to answer charges of contempt of parliament.

Another trip to the bar for Murdochs? There is growing speculation among legal circles in the UK that at least three former News International executives may find themselves called to the Bar of the House of Commons to answer charges of contempt of parliament.

When the Culture, Media and Sport Committee released its stinging findings earlier this week after the News of The World scandals, they concluded that they’d been given false or misleading evidence by Les Hinton, Tom Crone and Colin Myler. Both houses of the UK parliament have the power to summon non-members for contempt, and, if that contempt is established, to reprimand, fine or even imprison.

The last non-member to be reprimanded was the editor of the Sunday Express in 1957, and the last time the Commons ordered a fine was somewhat earlier — in 1666. But that full range of punishment powers is still available to parliament. It’s rather piquant, then, that there’s a precedent for imprisoning journalists and publishers for contempt after being brought to the Bar of the House which Rupert Murdoch would well remember — because it happened in Australia when he was 24.

In May 1955 Charles Morgan, the member for Reid in NSW, told the House of Representatives that an article in the Bankstown Observer had “impugned his personal honour and challenged his fitness to be a Member of Parliament”. (It alleged that he’d been part of an immigration racket before WWII.) Raymond Fitzpatrick, the publisher of the newspaper, and its editor, Frank Browne, appeared before the parliamentary Privileges Committee, which found that there had, indeed, been a breach of privilege and recommended that the House should therefore take “appropriate action”.

Fitzpatrick and Brown were then called to answer the charges before the Bar of the Chamber. After hearing statements from both men, the House voted that they be committed to 90 days jail. (The motion was moved by the Prime Minister, Robert Menzies.) Appeals to the High Court and Privy Council failed and they served their time in the Canberra police lock-up and Goulburn jail.

It’s highly unlikely that Hinton, Crone and Myler will have to pack their toothbrushes for a similar stretch at Wormwood Scrubs. But the phrase “brought before the Bar of the House” would not be sitting too comfortably with Rupert Murdoch at the moment. — David Salter

Front page of the day. The Washington Post covers Newt Gringrich officially bowing out of the Republican presidential candidate race: 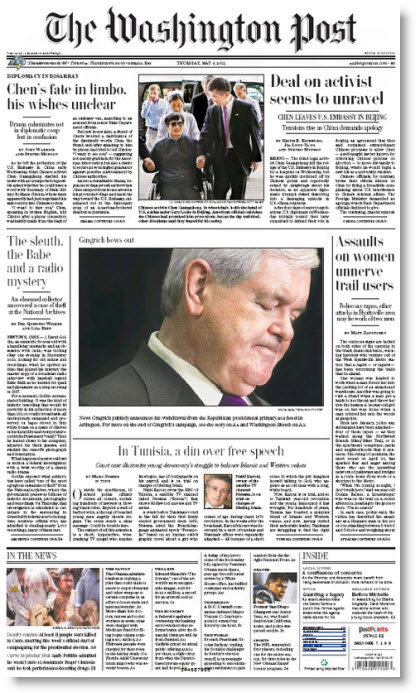 Department of Corrections. We’re not quite sure why Charles I got a mention in Toronto Star‘s story on the US embassy building in Ottawa, but we’re glad the issues around his death were cleared up in. 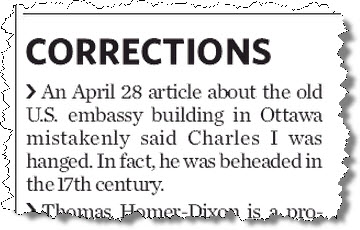 “A new study by Consumer Reports asked what steps Facebook users in the United States were taking to “protect your privacy.” The answers were surprising. About a fourth of respondents said they lied: They chose to ‘alter personally identifiable information’ such as their dates of birth.” — The New York Times

How the Christian Science Monitor is going online

“Three years ago, the Monitor embarked on a bold strategy of web-first journalism. We are making steady progress toward our goal of becoming self-sustaining.” — Christian Science Monitor

An interview with Osama

“Al-Qaeda considered going to the US networks with an offer of an exclusive interview with bin Laden, but decided against it, because ‘the channel that broadcast them, probably it would distort them somehow. This is accomplished by bringing analysts and experts that would interpret its meaning in the way they want it to be.’ Another option proposed was recording an HD video message, and distributing it to all of the US channels.” — TV Newser

“The rate of television viewership among young people continued to decline through the end of last year, according to ratings data released by the Nielsen Company on Thursday. The amount of time spent watching traditional TV dipped most dramatically among 12- to 17-year-olds.” — The New York Times

Six-figure deal for the Fox Mole

“Congratulations to Joe Muto, formerly known as the Fox Mole, for selling a book about his experiences inside Fox News Channel to Dutton, an imprint of Penguin.” — Gawker

Ex-News of the World editors to front Leveson

“Andy Coulson, David Cameron’s former spin doctor, is to appear at the Leveson inquiry next week along with Rebekah Brooks, the former chief executive of News International.” — The Guardian