The business claim that the government is making Australia more expensive to invest is is completely wrong.

Australia is a high-cost place to do business, apparently.

I know because I read it in the papers regularly. Tom Albanese, of Rio Tinto, complained this week about the high cost of doing business in Australia. BG Group saying the cost of its Gladstone coal-seam gas project have blown out. The Business Council cited high costs back in April. One of those absurd “business roundtables” the AFR conducts, back in February, was given over to business executives lamenting “we’re becoming a high-cost, low-productivity nation”.

Usually the fault is laid at the blame of the government. Labor was “anti-business”, complained Graham Bradley in February, mainly because of the Fair Work Act. But the carbon tax cops criticism too. Today the head of the AIG complained that the carbon tax was creating uncertainty because, unlike the GST, businesses couldn’t calculate its impacts.

So let’s look at the evidence.

Has the Fair Work Act increased costs for business? Let’s look at the ABS’s unit labour cost index. When the index is above 100, wage pressures are assumed to exist. How has it fared under this government? 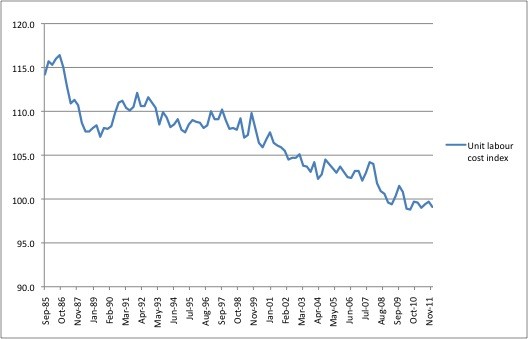 So, this is pretty much the only government in 30 years to eliminate wage pressures for business. The only area where the government has failed to curb wage pressures has been in executive remuneration, which continues to relentlessly increase at rates well ahead of inflation.

How about industrial disputes? Let’s have a look at the long-term trend. This is the number of days lost to industrial disputes per thousand employees. There was a much-vaunted spike in disputes in the September quarter last year, mostly driven by aggressive employers, but otherwise the level of disputes remains at historic lows. 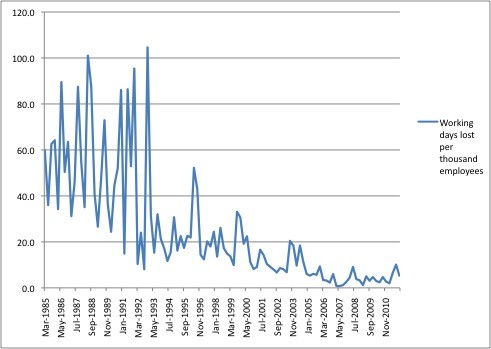 What about the business cost that is in the direct control of government, tax? Last year’s budget papers tell us the ratio between company tax to corporate gross operating surplus:

That is, outside mining, the overall tax take from business has fallen as a proportion of gross operating surplus. Plus, there’s the small matter of the corporate tax cut the government wants to introduce, which the Coalition and the Greens are opposing. In fact, this is a low-taxing government compared to its predecessor. Remember the Coalition’s rhetoric about being the party of small government, then have a look at tax revenue as a proportion of GDP and figure out which side of politics taxes less: 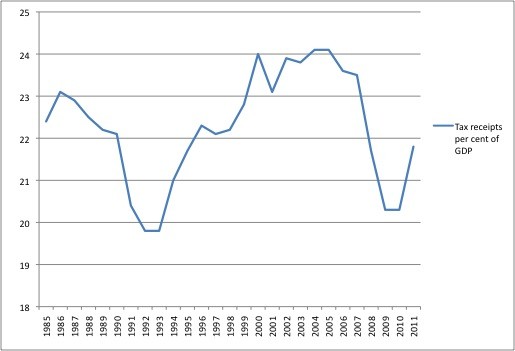 What else could the government be doing? Well it could avoid stimulating the rest of the economy so companies in the resources sector such as BG Group that need construction workers and material aren’t competing against the rest of the economy. And, lo and behold, the government is engaged in a massive fiscal contraction even before we get to the issue of a budget surplus for 2012-13.

That’s the impact on consumers, not businesses, but it gives a clear idea of the scale of impact compared to the GST that Willox believes was so much easier.

The historical data suggests that, when it comes to labour and tax costs, the claim that Australia is becoming more expensive is dead wrong. In fact, it’s the reason why the wage share of national income is currently only just above its historic low of 52%, while the profit share is higher than at any time before 2008. And that’s why capital expenditure is at record levels — nearly 30% of GDP. The business decisions of investors contradicts the claim that we’re driving business away with high costs.

The issue is not so much whether Australian is becoming a more expensive place to do business, as whether Australian business will ever be satisfied or whether it will continue to push for ever more wage cuts and corporate tax cuts at the expense of the rest of us.

The draconian new powers handed to the ACCC on carbon

Gee if only some this rational fact based analysis hit the MSM!!

I await with enthusiasm the avalanche of complaints from these industry groups about the absurd wages being paid to these whining executives in Australia. Seems they get paid for making excuses and blaming everything but themselves.

This is a really good piece, but Keane has misunderstood the index of real unit labour costs (RULCs). RULCs are not like a confidence index or a PMI in which 100 (or 50) represents a balance between positive and negative movements.

The level of the RULC index has no meaning. The RULC index is only used to show the rate (and direction) of change in labour costs.

Taxes pay for an infrastructure and a health system, both of which are unavailable in many places where companies do business. In much of Africa, for instance, mining companies employ workers who are HIV positive, and have to provide (admittedly rudimentary) health care for them.

Thanx for this piece, and thanx to Matt Cowgill for clarifying index of real unit labour costs.

Good afternoon Peter. The right wing trolls seem to avoid pieces that report inconvenient truths, but should they emerge I look forward to reading you play Whac-A-Mole.