One born every minute at The Burnie Advocate. A few days ago a new study was released in the US that showed the number of babies born suffering from withdrawal symptoms due to their mothers’ use of prescription painkillers had increased threefold from 2000 to 2009. The study, published in the Journal of the American Medical Association, was predictably picked up by myriad news services worldwide, who all used the catchy line “every hour a baby is born addicted to drugs”.

Everyone except Tasmania’s Burnie Advocate, which, on page 17 of its Wednesday edition decided to go with the much more sensationalist — and incorrect — “one drug-addicted baby is born every minute in the United States”. That’d be 525,948 a year, according to the Advocate. 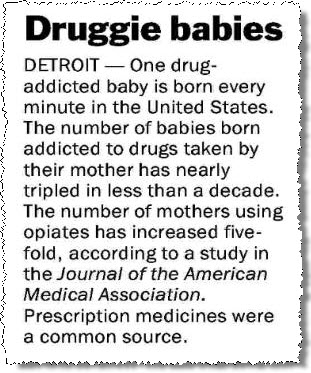 Front page of the day. Asylum seekers — err, boat people — and an Immigration Department plan to accommodate them in private housing equals “BOATHOUSES”. Well it does if you are today’s Daily Telegraph: 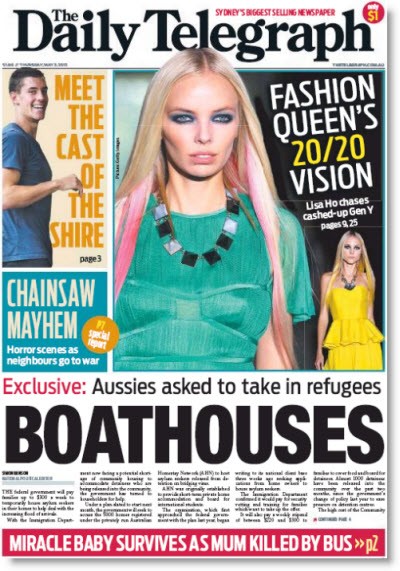 “A radio ad to promote digital radio has been let off by the Ad Standards Bureau for supposedly using foul language.” — mUmBRELLA

“Largely painted by US media in the aftermath of his January arrest as a childish, self-indulgent, gun-toting oaf, Megaupload founder Kim Dotcom gets a surprisingly comprehensive and nuanced overview in an industry trade serving a not-so-sympathetic constituency, The Hollywood Reporter.” — PaidContent

CNN has worst US ratings month in a decade

“April was the worst month for CNN in over a decade, and Time Warner CEO Jeff Bewkes made his dissatisfaction clear on Wednesday.” — Huffington Post

The media landscape’s changed for a Canada-bound Conrad Black

“When former media baron Conrad Black is released from prison this week he returns to a media landscape far different from the one he walked away from a decade ago.” — Canadian Business