Listen to the views of the fun police and you would think that Australia has embarked on some new kind of alcohol explosion.

The noise going up while consumption going down. Listen to the views of the fun police and you would think that Australia has embarked on some new kind of alcohol explosion.

The truth, as revealed by Australian Bureau of Statistics figures this morning, is somewhat different. Alcohol consumption per person has been relatively stable for 20 years 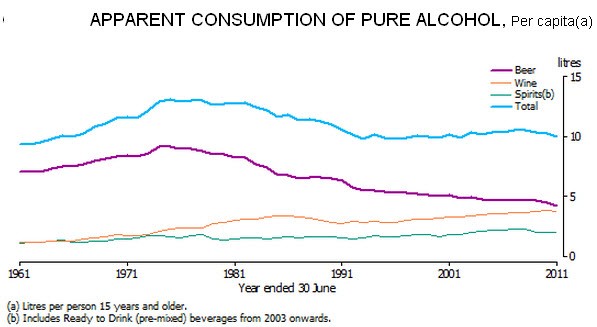 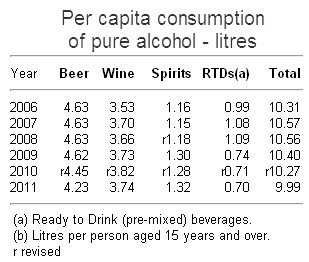 Babies are in safe hands here The World Health Organisation released a report overnight Born too soon: the global action report on preterm birth. Each year, the report shows, some 15 million babies in the world, more than one in 10 births, are born too early. More than one million of those babies die shortly after birth; countless others suffer some type of lifelong physical, neurological, or educational disability, often at great cost to families and society. Yet an estimated three-quarters of those preterm babies who die could survive without expensive care if a few proven and inexpensive treatments and preventions were available worldwide.

Australia does relatively well in providing the necessary care and comes well down the world’s pre-term birth list. 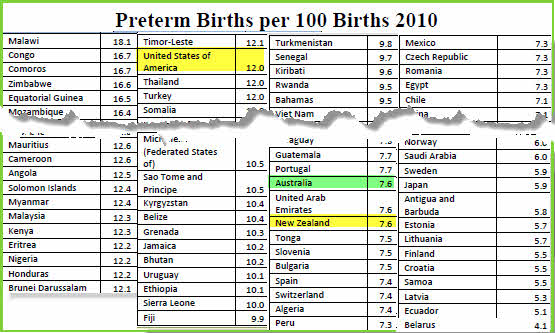 And another WHO publication, Levels and Trends in Child Mortality, shows Australia as almost the safest country in the world to have a child – second behind only Andorra with the lowest rate of neonatal mortality, covering deaths in the first month after birth and in 2010 only Iceland had a lower mortality rate for children under five. Further details are on The Stump blog.

Broken promises and the power of the internet. The internet, with things like You Tube, has certainly added a new dimension to politics. Messages that once required the thousands of dollars that only major political parties and lobby groups could muster are now available to all of us.

Like this one that a kind reader has referred to me about Ted Baillieu and his Victorian coalition government. 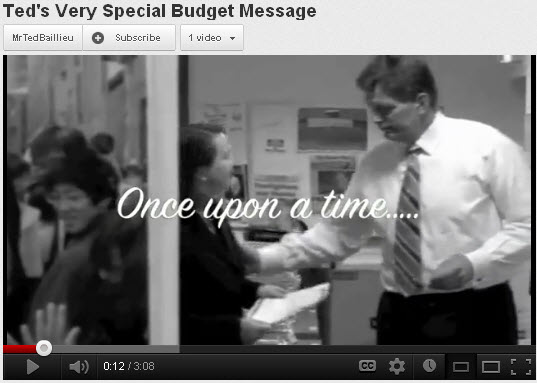 Not that many views yet but I predict it soon will have.

@Ted Ballieu very special budget message. Now there is confirmation of the lies the Liberal/NP coalition will peddle to get into government and then once in government they resort to their usual pattern of enhancing the wealth of the wealthy a the cost of the middleclass battlers, nurses, teachers and workers, truth is the LNP don’t give a stuff about ordinary Victorians.

The figures confirm that we are not a nation of boozers. peak beer consumption was in the early seventies, when it was quite acceptable for building workers yo have six pots at lunchtime. Occupational health and safety rules have cut out the lunchtime gargle for many. Beer consumption has fallen, and full strength beer has been diluted from 4.9% to 4.6%. There has also been a reduction in the contents of many bottles of beer, from 375ml to 330ml. Spirit drinks have also undergone some dilution, and the bottle size has been reduced from 750ml to 700ml.

The fun police are way off the mark, and our alcohol related problems are not as great as they would have you believe