Headline issues aside, Bill Shorten received much on-air attention over revived ALP leadership speculation and his bid to put the HSU into administration.

Fourteen months out from an election and with the electorate as her guide, Prime Minister Julia Gillard this week banished Speaker Peter Slipper and MP Craig Thomson to the cross benches for having “crossed the line”. Presumably the third umpire was called in to officiate as to when bat actually hit ball but the announcement drew substantial media coverage. Independent Tony Windsor raced back up our charts soon after, throwing the notion of a no-confidence motion back from whence it came — into Tony Abbott’s lap.

That left more air for Treasurer Wayne Swan in the run up to the budget, for which the government must gain traction. Few have missed the irony that it may well be reported favourably if smoke and mirrors are used to hit surplus to ease the anticipated slashing of public service — with defence in the crosshairs as we withdraw from Afghanistan — and cost to big business.

So far so good for Swan who anointed a healthy rate cut yesterday and again welcomed the notion of taking on squillionaire Clive Palmer in the seat of Lilley. No-one questions the mining magnate’s ability to create a headline, but Palmer will need all his weight to oust Swan should he secure Liberal pre-selection. Those with long memories will recall Palmer lost LNP preselection for the seat of Fisher in 1984 to one Peter Neil Slipper. 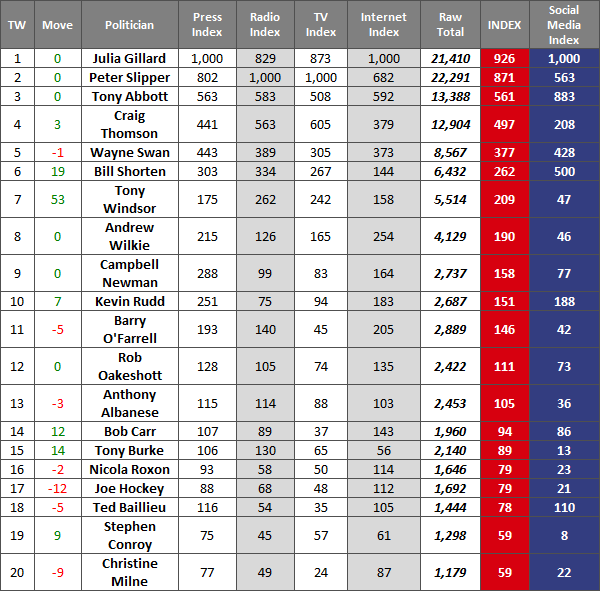 Headline issues aside, Bill Shorten received much on-air attention over revived ALP leadership speculation and his bid to put the HSU into administration.

As Rupert took to the stands over the News of the World scandal, here the knock-on effect saw the Convergence Review calling for a media regulator with teeth.