News Limited's The Daily Telegraph outdid its tabloid brothers and sisters today with its coverage of the Reserve Bank's interest rate cut (well, its angle was "50 reasons the Big Four banks MUST pass on the full interest rate cut".

Sun jumps the gun on rates decision. You would have thought the Herald Sun would have learned from its Logies debacle. In a bid to be among the first to break the news of the RBA’s decision on interest rates yesterday — for the record the central bank cut the rate by 50 basis points to 3.75% — the Herald Sun inadvertently published this article (which is no longer online) at 1.59pm, a full 31 minutes before the RBA announced its decision: 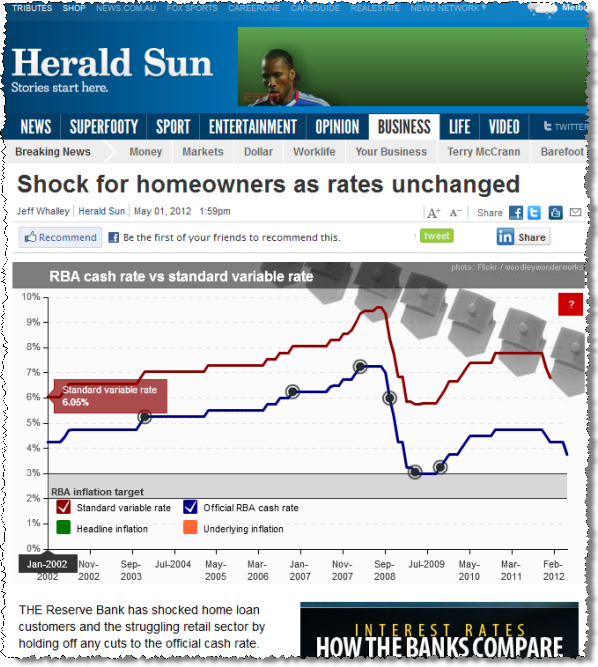 As the prepared article explains:

“Pressure will now build, particularly from struggling retailers and builders, for deep cuts next month.”

Tele struggles for 50 reasons why banks must act. Meanwhile, News Limited’s The Daily Telegraph outdid its tabloid brothers and sisters today with its coverage of the Reserve Bank’s interest rate cut (well, its angle was “50 reasons the Big Four banks MUST pass on the full interest rate cut”) … 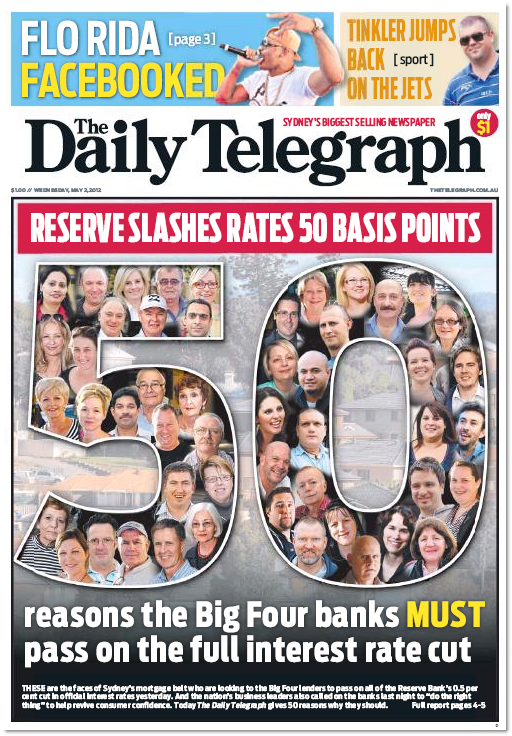 The Tele’s list included some, well, interesting suggestions — some of which were so insightful they needed to be repeated: 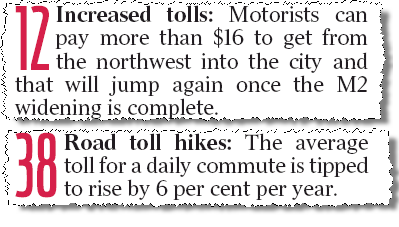 For us, it was number 50 on the list — The Tele‘s Dennis Denuto-esque defence — that summed up the tone of the article the best:

In a nice contrast, News.com.au also ran a story titled “Aussies better off than ever“. It reveals the new AMP.NATSEM Income and Wealth Report found the average Aussie family was $224 better off a week in real terms than in 1984. It’s true some costs are up, but others are down or the same price, notes the report:

“… the report points out that since 1984 the cost of living has skyrocketed with everyday essentials such as electricity (up 253 per cent), petrol (208 per cent) and public transport costs (287 per cent) all soaring.

“But those rises have been partially offset by dramatic drops in audio visual and computing, which now cost one tenth what they did in 1984, while average prices for clothing, footwear and major household appliances have changed little, and are often lower today than 27 years ago.”

“Essentially we seem to be leading bigger lifestyles, all of which can add to perceived cost of living pressures,” said AMP Financial Services managing director Craig Meller. We guess that explains the following inclusions in The Tele’s 50 reasons …

Melbourne custom publisher in liquidation. Specialist magazine publisher Nuance Multimedia has been put into liquidation. The Melbourne-based group publishes a handful of specialist titles, including bimonthly Australian Cyclist, the thrice-yearly lifestyle title House, an annual bulletin for the Association of Decorative and Fine Arts Societies (ADFAS) and member magazines for the Institute of Public Accountants (publicaccountant) and the National Gallery of Victoria (Gallery).

The company’s founder and CEO Jim Clarke, a former Fairfax executive and Walkley Award-winning journalist, made the difficult decision to wind up the business yesterday. Eight staff will lose their jobs.

Clarke told SmartCompany the operation couldn’t keep up with its costs, blaming changes in reader habits and the impact of the economic downturn on the advertising market. The losses in retailing have been particularly savage. “Retail is doing it very, very hard,” he said. “Doing it much more difficult than what most people, and certainly our government, think. There’s a lot of stress in the market.”

Clarke is working with the ADFAS, the Institute of Public Accountants and the National Gallery of Victoria to continue their member publications. “I’m working with both of those organisations to facilitate a situation where there’s no interruption in supplying those magazines to their members,” he said.

Clarke says he tried to sell the cycling publication but wasn’t able to secure a buyer. He will step away from the business once it has wound up, with no hope of resurrecting the company’s own titles. — Jason Whittaker

Front page of the day. The Guardian leads with the damning findings by the UK culture, media and sport committee which concluded “Rupert Murdoch is not a fit person to exercise the stewardship of a major international company.” 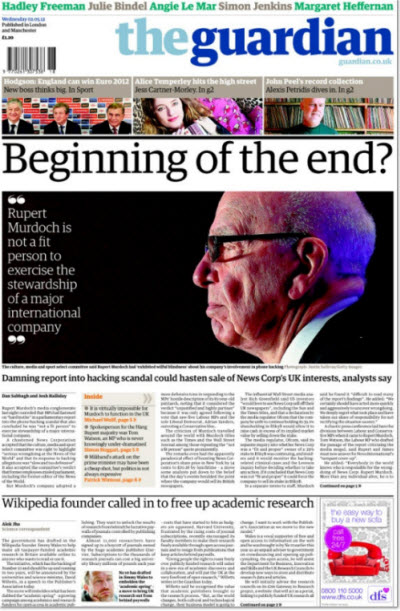 The Department of Corrections. From the May 1 edition of the Scottish Daily Mail:

“MPs on the Culture Media and Sport Committee concluded that former News of the World editor Rebekah Brooks should take responsibility for the “grotesque” behaviour of the paper in its pursuit of a Milly Dowler scoop in 2002.” — Press Gazette

“A Washington-based ethics watchdog is calling on federal regulators to revoke News Corporation’s 27 Fox broadcast licences in the wake of the highly critical report on phone hacking from the UK parliament.” — The Guardian

“Staff at Fairfax Media’s Melbourne newspapers have been told redundancies are ‘quite possible’ in coming months as the company begins integrating its newsrooms and shifting its focus to digital media platforms.” — The Australian

“Nine has settled a case with former Brisbane reporter Melissa Mallet who was sacked following the infamous ‘Choppergate’ scandal of 2011.” — TV Tonight

Mmm that Beat cover brings to mind the experience of quitting rather than deliver a lurid front cover for the Sydney City Hub in 2007 street press – a big call but as an admitted solicitor aspiring to return to practice there were some problems specific to moi:

1. the graphic related to a matter that was subjudicie – ie before the courts;
2. the case involved a client of the partner of the owner, effectively a conflict; and
3. it was beyond me how the 50% of outlets loosely termed family friendly retail would take to a graphic of a blow up sex doll including those curious parts.

And yes I did get my (unrestricted non principal) practicing certificate back.