The Fiji coup was an embarrassing failure of Australian policy. Now Bob Carr has to help fix the mess.

Being foreign affairs minister is a pretty thankless job, because problems generally have a long lead time. Things that go wrong on your watch are likely to be the fault of some remote predecessor, but you’re left with having to clean up the mess.

But it’s the job Bob Carr has always wanted, so there he was yesterday in Fiji, with a “ministerial contact group” from the Pacific Islands forum, to assess the country’s progress, or lack thereof, towards democracy.

Fiji has been ruled by its military leader, Commodore Frank Bainimarama, since he seized power in December 2006. As is common with military coups, he promised a speedy return to democracy, but that and subsequent promises of liberalisation have been repeatedly falsified.

The coup was an embarrassing failure of Australian policy. Australian officials had assured everyone that everything was OK and there was no need to contemplate military assistance to Fiji’s elected government.

Bainimarama had flagged his intentions months beforehand, but Australia’s efforts were geared towards encouraging the government to compromise rather than to stand up to him.

This displayed a fundamental misunderstanding of the situation. Once a military commander has shown a taste for interfering in politics, there is no middle ground: they need to be removed. The idea that Bainimarama could be left in place and bought off with concessions and that Fijian democracy would survive was sheer fantasy.

Without laboring the point, Fiji is not a big place, and the resources at Bainimarama’s command were tiny. It is unthinkable that he would have persevered with his plans if he knew that an Australian military response would be forthcoming. But when the coup came, prime minister John Howard went out of his way to rule out the option of Australian intervention.

Australia has one of the world’s largest military forces, grossly out of proportion to any actual need. (We’re about 14th in the world by total military spending, or 12th per capita.) If we’re not going to use it to protect democracy in the region, at the request of a friendly government, what use is it?

But the time for that has now passed. Carr’s predecessors have allowed Bainimarama to get away with tearing up his country’s constitution, with the only result being a set of mild and ineffective sanctions. Now the plan is for “constructive dialogue”, encouraging Fiji to follow through on a promise to hold elections by September 2014.

The contact group declared diplomatically that they had “a sense that Fiji was a country in transition, moving to put in place processes required for elections”, and they “welcomed assurances” that the polls would go ahead and would be free and fair.

But that seems a remote prospect. Realistically, a dictator who has spend more than five years in power is not going to suddenly develop a thirst for democracy. The only way Bainimarama is likely to hold fair elections is if his neighbors apply serious pressure — a good deal more serious than they have so far shown any stomach for.

I suspect Carr is well aware of that, but feels that at present he doesn’t have much choice and “constructive dialogue” — which at least puts Australia on the record supporting democracy — is about the best he can do.

And by the time 2014 rolls around it’s likely that Labor will be out of office and Fiji, once again, will be someone else’s problem. 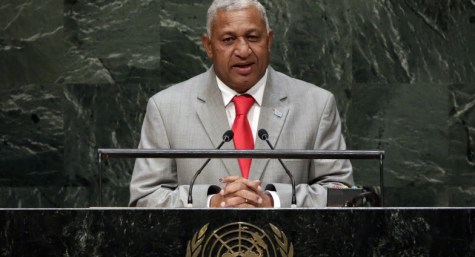 Has Bob Carr rolled over on Fiji too early?

I cannot believe the shameful two-faced audacity of Charles Richardson, he has on one hand decried Australian involvement in both Iraq and Afghanistan, demanding we pull back from our involvement in operations that the left has bitterly decried as illegal, and on the other he is demanding to know why the Australian Defence Force was not unilaterally deployed to invade a friendly country for no other reason than he doesn’t like the government.

It looks like he would rather have it both ways, unilateral military action is bad when he doesn’t like it and good when he does. Mind you, consistency isn’t exactly a trait one tends to associate with the Left, particularly when it comes to military action.

The situation within Fiji may not be to our liking or taste; however it is a matter for the Fijian people to deal with in their own time and way. Not for Australia to heavy our neighbours in the manner for which he so bitterly criticises America

@Michael: Perhaps you should go back and read the reports I linked to from the 2006 coup. The Fijian government requested Australian assistance – there would have been nothing “unilateral” about it at all. (Incidentally, I supported the initial Australian deployment to Afghanistan, for exactly the same reason – it was made at the request of the lawful government. I think the mission has now outlived its purpose and should be terminated.)

I found this piece informative and well argued, and am particularly grateful for the link to countries’ military spending per gdp and per capita. I had assumed that the military ‘experts’ were correct in asserting that Australia under spends on the military. This will be good to remember when encountering the militarists’ fear mongering should the Australian Government cut or even ‘defer’ military spending next Tuesday.

In writing this article you fall into the lazy trap of assuming that democracy=good and dictatorship=bad. It is unfortunate that the Australian government has the same lazy beliefs that fail to consider the nuances of Fijian politics as the disengagement with the Bainimarama government has not been in Australia’s long term interests.

The facts are that Fiji has never been able to achieve any long term stable democracy. Whilst the reasons are complex, it can be largely be attributed to the ethnic and socio economic make up of the country. Indigenous Fijians make up 50+% of the population and own 90+% of the land. Indo-fijians, brought to the country by the British to work on sugar farms make up about 40% of the population and dominate the fijian economy. You also have an east/west divide with most of the money being made on the west of country whilst the capital and the dominant tribes in the grand Council of Chiefs are in the east of the country.

No democratic parliament has been able to successfully stride the middle ground between the two dominant races and race based politics has led to widescale riots in the past, long term strikes in significant industries, and other incidents detrimental to a successful community.

Whilst the Bainimarama dictatorship is not perfect and there are significant freedom of speech issues under his rule, the country has had a level of stability that is starting to promote real economic growth and he has so far successfully maintained the middle ground between the two races, something no parliament has been able to do.

The Australian government’s refusal to engage with Bainimarama is disrespectful to the Fijian people and ignorant of the difficult political situation in the country. The lack of Australian money flowing into the country has been replaced with Chinese money and the Chinese obviously see the benefit of establish a strategic foothold in the pacific. This may or may not be to Australia’s detriment in the future.

@David: You’re quite right, I do subscribe to the assumption that democracy=good and dictatorship=bad. But I don’t believe it’s lazy; on the contrary, I think it’s amply confirmed by centuries of theory and practice. Sure, democracy isn’t perfect, but it’s the best we’ve been able to come up with – it certainly has a much better record of dealing with ethnic and socio-economic tensions than dictatorship does. I realise Fiji has major problems as a result of its colonial legacy, and that restoring an elected government isn’t going to solve everything overnight. But I think it’s the first essential step, and as a friendly country it’s something we should be pushing for very hard. To my mind it’s much more “disrespectful” to the Fijians to tell them that they’re not fit for democracy. And indeed if you look at the history, Fiji’s governments haven’t been brought down by ethnic riots or the like, they’ve been brought down by ambitious thugs in uniform who fueled tensions for their own purposes. It’s high time we stopped encouraging them.