Melbourne street music mag Beat scared its readers this morning when its new edition appeared to be its last. Long-time staffer Luke Benge reportedly got a controversial cover through without anyone noticing.

Melbourne street music mag Beat scared its readers this morning when its new edition appeared to be its last: 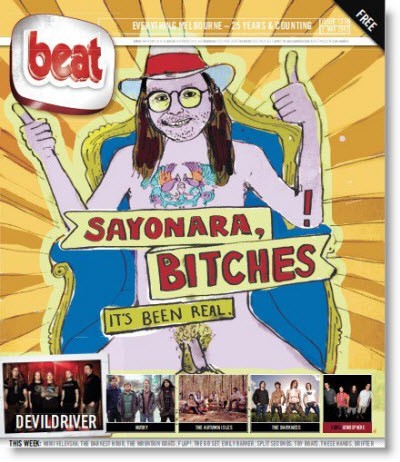 But rather than a farewell from the magazine itself, it was a sayonara from its long-time staffer Luke Benge, who got the cover through without anyone apparently noticing. As Oliver Palmer, a friend of Benge’s, tweeted today:

“So, my friend Luke hijacked the cover of Beat today. Sent to the printer last week on the hope that it could possibly make it through press checks, he flew out to NYC yesterday. AMAZING.”

Is that really true? The music rag seems to be admitting it in this post on its site today:

“This week’s ‘hi-jacked’ Beat cover salutes Captain Luke Benge. Our much loved eccentric typesetter who’s been with us longer than we can remember. Sorry to the faint hearted of you out there in Melbourne but hey, whatever, we love a bit of cock at Beat.”

Crikey spoke to Beat publisher Patrick Carr, who said he “can’t confirm or deny” that the covers were switched (which sounds like a big fat yes to us). Who was supposed to be on the cover then? “That’s an interesting question and I’ll leave it at that,” replied Carr on the phone. He then asked Crikey to email through our questions. He later said via email: “It is what it is, and that’s sensational!”

Music blogs speculated that the Kaiser Chiefs were supposed to grace the cover this week. The indie rock kids from Leeds will kick off their latest Australian tour later this week.

Crikey asked Carr if he was concerned that readers would think it was a final issue. “Beat is a Melbourne institution, 25 years strong,” replied Carr. “We’re here to stay and this is simply a farewell to our good friend Captain Luke Benge.”

Seems readers like a bit of hijacked cartoon nudity, with “lots of laughter and an Everest of calls and emails,” said Carr.

Although it’s surely not the first dick to appear on the cover of Beat.

Unpicking claims in the media about suicide and depression

The real reason our athletes don’t sing in Rio

Wow. Seriously? Is this Crikey’s last write-up?; it’s on the verge of welcoming itself onto my ‘extinct’ list after this tripe.

No one is forcing you to read it.