Why no media coverage ? Because, when I found out about this event at around 8pm — and then Googled it — there were no reports on this incident, apart from a couple of aggregation reports on Twitter (like this one). I searched for video footage and again found nothing — not even on the Sky News website.

So, having still not seen the footage, but wanting to know the facts, I rang the Sky News newsroom. I spoke to a rather terse character who, when I told him about the incident, said: “Grahame Morris … are you sure? On SkyNews? Today?” — David Donovan at Independent Australi (read the full story here)

Front page of the day. The Herald Sun leads with Qantas job losses. We see what you did there with the kangaroo and the tail … 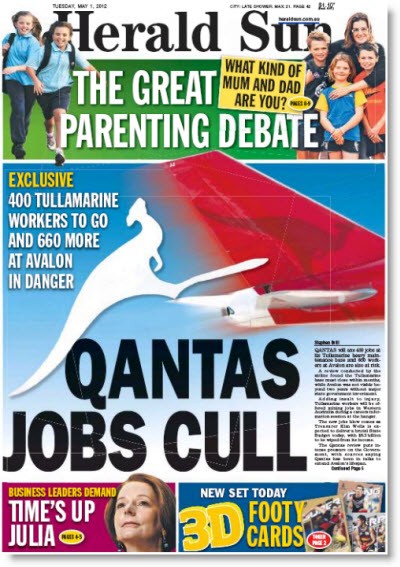 The Department of Corrections. Damn. From Canada’s The Beacon Herald yesterday:

“James Murdoch will be criticised by MPs investigating phone hacking on Tuesday, but their assessment of his conduct is expected to fall just short of accusing the former chairman of News International of misleading parliament about the extent of his knowledge of the affair.” — The Guardian

“Former Daily Telegraph editor Garry Linnell has been promoted to editorial director of Fairfax’s Metro Media division less than a year after joining the company.” — mUmBRELLA

Lawyers for The Block ask blogger to remove photos

“Lawyers acting for Channel Nine’s The Block ask a blogger to remove photos of the completed interior of a house that features on the top-rating show. ” — The Daily Telegraph

“Andy Duann, a student at the University of Colorado Boulder, took a picture for the CU Independent of a tranquilised bear falling out of a tree. The photo was distributed by the school paper without Duann’s permission, and he is considering taking legal action against the paper.” — Mashable

“The Mexican government’s human rights commission said Sunday that it will investigate the apparent slaying of a correspondent for Proceso news magazine who often wrote about drug trafficking. ” — Newsday

Almost nothing in the papers about the Temby report because as he explained endlessly Craig
Thomson was not being investigated.

Although Alberici last night thought he should be hung, drawn and quartered for not doing anything.