Another weekend, another excellent Sunday Herald Sun article talking up pill peddlers Swisse Vitamins in their PR war to fend off the Therapeutic Goods Administration.

Another weekend, another excellent Sunday Herald Sun article talking up pill peddlers Swisse Vitamins in their PR war to fend off the Therapeutic Goods Administration.

Federal Court judge Richard Tracey is expected to rule this week on whether the Melbourne-based Swisse — which banked $8.9 million last year on revenue of $77.2 million — was in breach of advertising standards for claiming its capsules were “clinically proven”.

But as any first-year PR student would tell you, it pays to get on the front foot early. In the lead-up to the verdict, the company’s well-paid mouthpiece Mitch Catlin has been busy reaching into his tabloid Rolodex to farm out some cracking exclusives, including The Voice starlet Delta Goodrem’s dramatic move yesterday to endorse its “skin care” range.

Swisse — which sells something called “Superfood” for $30 a bottle — has appealed an initial TGA decision that its health benefits couldn’t be proven. A negative outcome could damage the brand that prides itself on its chirpy holisticism. 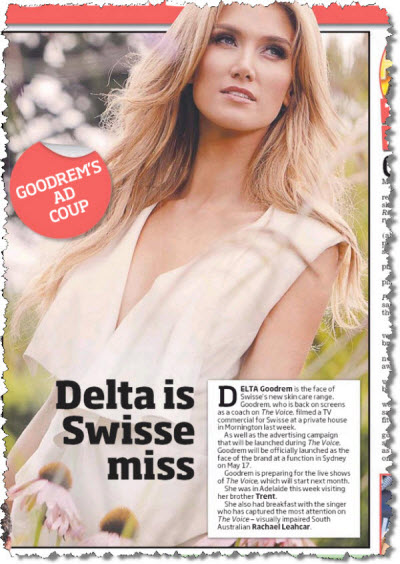 Such is Catlin’s reach into the desks of Southbank’s finest that even Confidential gossip Alice Coster had been rolling around in the largesse, jetting off to a London trade show earlier this month to file this Business section piece modestly headlined “Swisse eyes the world”.

A cursory media monitoring exercise reveals that since Catlin jumped from his previous tension-filled gig alongside Bernie Brookes at Myer a year ago, Fiona Byrne has stumped up 11 Swisse mentions, Luke Dennehy 17 and the fashion section’s Anna Byrne six. The sport section has mentioned Swisse at least eight times over past two years.

As Crikey reported last September, Catlin came of age as a Hez link man during the Spring Racing carnival, where he managed to shoehorn acres of pro-Swisse coverage across the little paper in a manner reminiscent of his previous job spruiking the Myer marquee.

He’s in control over on Facebook, where a group of netballers are participating in something called “ambassador auditions” and nary an AFL broadcast can be viewed these days without a sing-song “you’ll feel better on Swisse” tagline.

Other interventions have thrown up mixed results. Swisse took the high moral ground in March when it pulled its ads off The Circle following George Negus and Yumi Stynes’ comments about a soldier but stumbled last week when health experts lashed out at a proposal to offer free training for GPs if they sold its stellar “Swisse practitioner” range of supplements.

Last month, The Daily Telegraph wrote that some Swisse clinical trials had been carried out by father of the excitable 35-year-old CEO and co-owner Radek Sali. This feel good Sunday Hez feature in February mentioned the father-son connection but didn’t make anything of it — the more important point was that “the company had gone from the supermarket shelves to the social pages”.

(Sample copy: “Fit, smiling and brimming with confidence and dynamism, Mr Sali in just seven years with Swisse has delivered handsome profits to shareholders and earned his workforce’s admiration. Yet he is the kind of CEO many companies would fear employing because of his love of change … at Swisse, team leaders are taught to accentuate the positive, cultivating a workplace where staff are unafraid to ask questions or admit mistakes.”)

“Money is nout [sic] our drive,” Saba explained when the Tele wrote about the father-son research link. “Its [sic] a means of achieving our key objective of improving quality of life for Australians and the world, and putting back into the community. We’ss [sic] continue to fo [sic] what we do best — making people healthier and happier through our clinically proven products. Ultimately, our consumers are the best judge — and the demand for Swisse keeps growing.

“Our consumers are further proof that you’ll feel better on Swisse.”

Other celebrities wrapped into the firm’s web include Ricky Ponting, Sonia Kruger and Tom Hafey.

UPDATE 2:02pm. Sunday Herald Sun ed extraordinaire Damon Johnston has been in touch to request a link to this March 11 story reporting on the TGA probe.  It’s “the most prominent publication of these damaging claims against Swisse to date,” Johnston says.

The court judgement and my comment is now available at: