Tips and rumours: Churchill back at The Age … reality check on ‘future PM’ … taking the piss in Brisbane council elections

From the Crikey grapevine, the latest tips and rumours … Don Churchill back at The Age. Ageing ex-Age CEO Don Churchill is wending his way back to Media House. Sources inside the secretive media giant say the New Zealander, who famously penned a nauseous herogram to himself when he announced his departure last July, is back to […]

Don Churchill back at The Age. Ageing ex-Age CEO Don Churchill is wending his way back to Media House. Sources inside the secretive media giant say the New Zealander, who famously penned a nauseous herogram to himself when he announced his departure last July, is back to run an as-yet unannounced “Newspaper of the Future” initiative for his successor David Hoath. “The Age have once again been forced to reach back into the past to embrace the future”, noted one Collins Street wag this week. In his send-off missive, Churchill claimed he had a desire to “travel” and that he had “a book … lurking in me too”. No word on either of those initiatives.

Reality check on “future PM” Butterworth A couple of tipsters have filed in with rather cynical responses to Tuesday’s tip-off that “Liberal Party wunderkind Alexander Butterworth is apparently a monty to receive the nod from State Council for the safe seat of Pearce at the preselection on June 15.” Butterworth may not be as popular as our initial tipster made out.

Far from being “future prime minister of Australia” material” — one tipster “… can confirm that Alexander Butterworth does not enjoy overwhelming support from State Council in relation to the upcoming Pearce preselection. Most State Councillors feel that Butterworth (at the ripe old age of 24) lacks maturity and real-world experience compared to rival candidates for the seat.” They also took the liberty of pointing us back to our own story on Butterworth’s VSU campaign, penned by one Bernard Keane way back in ’08. They snidely sign off: “I am sure the ALP is quaking in its boots over the prospect of a campaigning genius such as Butterworth joining the federal Liberal team.”

Another writes, “before the shoulder tap, Liberal powerbrokers might want to consult this recent ‘Left and Right’ mining tax debate on Perth’s RTR-FM that pitted Butterworth against Labor’s experienced local point man Luke Walladge. In it, the 24-year-old Butterworth ums and ahs his way through a torturous 15-minutes of dry-as-dirt talking points, claiming that mining company tax profits are ‘going to mum and dad shareholders through superannuation’ and that the best thing governments could do during a mining boom was cut taxes.” Take a listen for yourself, but this critic’s review is in: “a long way from the Lodge, on that performance at least.”

Heartless radio management or the internet? You decide. “Jeff, the paper-man” is no more, according to this angry informant: “top-rating Radio 5aa in Adelaide has sacked its newspaper man after 31 years. ‘Jeff, the paper-man’ who organised and delivered hot copies of interstate papers was made redundant by email last week. No meeting, no discussion, two days’ notice, just a four-line email. Thanks Lachlan.”

It may look like a piss take, but it’s clever campaigning Queensland voters may be bored witless by more politics, but the local council elections are still proving to be fruitful when it comes to amusing electioneering material. One observer has pointed us to this creative slogan spruiking Greens candidate in the Brisbane City Council elections Rachel Jacobs — 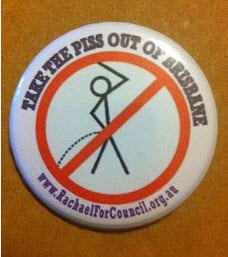 No, Rachael’s not making fun of her home town, apparently it’s a cute reference to the ongoing issue around the inadequate numbers of public toilets in the nightclub laden Inner City ward.  Back in 2009, brisbanetimes.com.au ran photographs depicting drunk clubbers urinating on food in nearby shops and one young woman squatting in the middle of a convenience shop, under fluorescent lights no less.

The man behind the badges has provided the background on Facebook, explaining “that the people of the Inner City ward created such an outcry about the lack of public toilets that the Campbell Newman-led Brisbane City Council trialled some mobile toilets. But then killed that off after some complaints about the smell. So they went back to previous situation of people urinating and defecating in the streets and local businesses. No back-up plan, no second attempt.” One potential voter wasn’t buying the campaign, but Sinnamon quickly responded:

Put that on a T-shirt.

Sunshine state to go cold on solar rebate? Speaking of Campbell Newman, it seems Can Do is still intent on … doing things, or more accurately, undoing things — particularly when it comes to climate initiatives. Our informant writes: “hot on the heels of Newman preparing to legislate to show how much of your electricity bill is from the carbon price (but curiously not itemising all the other cost aspects) are plans to kill the solar rebate. Tariff rebates will be reduced significantly or scrapped for all new systems.”

One formula for sports reporting. One formula one fan questioned why Ten’s coverage of the F1 wasn’t getting much scrutiny from certain media outlets (although The Oz picked up the story of how Ten was forced to cover the F1 live and put it back on its HD channel after Mark Webber weighed in on the  social media storm).

“I haven’t done a complete scrutiny, but I can’t help but think theroar.com.au may not have reported fan backlash against TEN switching F1 from One to Ten because Ten bought shares in it?” asked this F1 lover. The Roar is “Australia’s leading sports opinion website, combining expert columnists with edited fan-written sports articles.” Network Ten became a minority investor in the site back in 2010.

Crikey spoke to The Roar founder Zac Zavos to find out why there were ignoring the story. No conspiracy, says Zavos, they just don’t have a resident F1 writer — “it’s not a big sport for us” and they rely on sports fan writers, AFP or APP to cover F1 for the site. He also pointed Crikey to articles that have questioned Ten in the past — including one that states “Ten, once thought to be a key saviour of Australian basketball, is now stabbing the NBL and basketball in Australia right in heart.”

“I get what’s being suggested, and I’m obviously aware of potential issues, but I can absolutely tell you we’ve got no issue with running pieces which are either critical or positive or negative towards Ten or any other media companies, frankly,” said Zavos. “We’re not an agenda-ed site, we just run sports opinion.” But here’s a tip for wannabe sports writers: “Tell your tipper to send us the article and if it’s written well enough, it’ll get a run.”

To piss or not to piss – until the mid 60s, public toilets in Sydney (Hyde Park etc) were closed on Sundays – either the god-botherers didn’t micturate or went straight home from cross legged churching.
I remember a huge outcry from the decency brigade when a ‘woman’s rest centre’ was established on Park St, even though it was cloaked as a baby changing area.
Xtian babies didn’t need such maintenance coz they were swaddled.