In today's Media Briefs: Are Rupert's BSkyB ambitions up in the air? ... How the media business really works ... Shorten's PM agenda ... Front Page of the Day ... The Department of Corrections ... and more ...

Are Rupert’s BSkyB ambitions up in the air? BSkyB is slowly moving back into the foreground of the phone-hacking scandal that has ensnared News Corp and its controllers, Rupert and James Murdoch.

UK media reports (and confirmed by Ofcom) say the regulator has now started a formal investigating into whether British Sky Broadcasting was a “fit and proper” owner of a broadcasting licence. The inquiry has gone from “monitoring” the available evidence, to the “evidence gathering phase.” As a result, Ofcom has ordered News Corp’s UK newspaper subsidiary to provide it with documents relating to civil litigation stemming from the long-running phone-hacking scandal at the group.

Ofcom could force News Corp to sell all or part of its 39.1% stake in BSkyB or even revoke its broadcast licence.

Ofcom said it had contacted News Group Newspapers, parent company of The Sun and the now-defunct News of the World, requesting documents “which it understands are held by the company and which may be relevant to this assessment”. BSkyB is also party to the correspondence, the regulator said, adding it would ask all “relevant parties” for evidence.

While it was mentioned at times in the testimony from Rupert and James Murdoch before the Leveson inquiry, their ambitions to control all of the pay TV giant has been a side issue that fell victim of the hacking scandal.

Murdoch said as much when he told the Leveson inquiry that if it hadn’t have been for the Milly Dowler story, the bid for BSkyB would have been successful. But the discussion about the bid was about full control, not whether the Murdoch-dominated News Corporation should have effective control (with just over 39%) as they do now.

The Murdochs’ evidence at Leveson and the parliamentary inquiry tells us they are trying to protect not only one another, but the BSkyB bid and keep alive hope to relaunch a bid in the future.  — Glenn Dyer

How the media business really works. Here’s a quiz question Eddie Maguire is unlikely to ask on Hot Seat:

Who said this? “Unless we can return to the principles of public service we will lose our claim to be the Fourth Estate. What right have we to speak in the public interest when, too often, we are motivated by personal gain?”

The answer, of course, is (C) Rupert Murdoch, interviewed by the ABC in 1961 when the nascent media mogul was still being taught the tricks of the tabloid trade by the late Zell Rabin of Sydney Daily Mirror fame.

Judging by his performance at the Leveson inquiry and the earlier UK parliamentary select committee, Murdoch’s notion of “the public interest” has modified somewhat over the intervening half century. Last night, in a curiously rambling aside, he told Leveson that the world of business runs on a “you scratch my back, I’ll scratch yours” basis.

Not much room for “public service” under that system — but plenty for “personal gain”. — David Salter

Shorten: “I haven’t seen what she (Prime Minister Julia Gillard) said, but let me say I support what it is that she said.

Speers: Hang on. You haven’t seen what she’s said …

Shorten: … but I support what my Prime Minister said, so …

Shorten: Well my view is what the Prime Minister’s view is …

Watch the full, excruciating interview below: 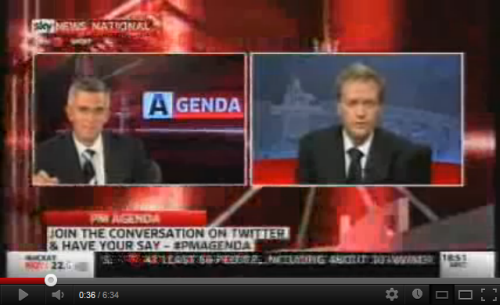 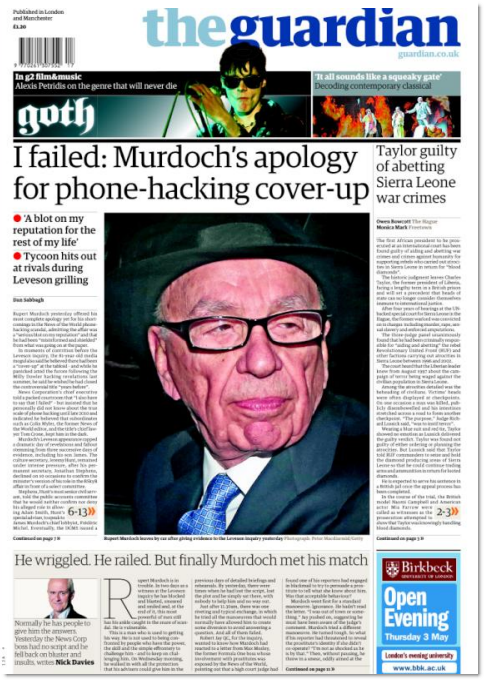 The Department of Corrections. The Times, all the way from Pryor, Oklahoma in the USA, ran this correction April 24:

“The former legal manager of the News of the World branded allegations by Rupert Murdoch that he was responsible for covering up phone hacking by the paper’s journalists a ‘shameful lie’.” — The Guardian

“A Liberal MP has complained to the Australian Press Council, claiming that The Sydney Morning Herald and The Age indulged in distorted coverage of the National Broadband Network in what appears to have been a commercially led wraparound supplement.” — mUmBRELLA

“The recommendations of the Convergence Review are due out on Monday and set to have far-reaching impacts on the media landscape.” — TV Tonight

Judge upholds charge against Bradley Manning in the WikiLeaks case

“A military judge has refused to dismiss the most serious charge against an Army private accused in the biggest leak of government secrets in US history. ” — The Australian

“The Committee to Protect Journalists has launched a Journalist Security Guide, to help freelance journalists stay safe while working on stories.” — journalism.co.uk

“An article, in the March 2011 issue of Vogue, drew widespread surprise and ridicule, especially among Washington’s foreign-policy community, which had long regarded Syria as a regional troublemaker and leading violator of human rights. It contained little hint of the Assad family’s history of repression, offering only that Syria is ‘a country full of shadow zones.’ And then the story disappeared.” — The Washington Post

Can an algorithm write a better news story than a human reporter?

“Every 30 seconds or so, the algorithmic bull pen of Narrative Science, a 30-person company occupying a large room on the fringes of the Chicago Loop, extrudes a story whose very byline is a question of philosophical inquiry.” — Wired

Last night, in a curiously rambling aside, he told Leveson that the world of business runs on a “you scratch my back, I’ll scratch yours” basis.

I’ll fix it for you:

Last night, in a curiously rambling aside, he told Leveson that the world of business runs on a “you lick my boots, I’ll give you a few crumbs” basis.

I was tempted to use a different word for boots, but this is after all a family paper.