It comes as despairing Labor MPs have again begun questioning the viability of Ms Gillard’s leadership and insisting that Labor act to remove the growing impression it would stoop to anything to cling to power.

Sources said cracks were also appearing among the majority element of the NSW Right which backed Ms Gillard against Kevin Rudd in the leadership ballot just two months ago.

The betting markets too are pointing back towards another challenge being possible. The certainty that Julia Gillard would remain Labor leader until the next election that followed her defeat of the Kevin Rudd challenge has now been replaced by uncertainty. 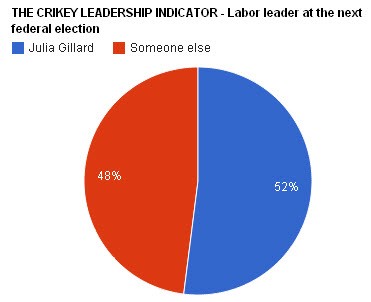 And as for Kevin13 himself, he is maintaining a sensible silence in English while polishing up his Chinese characters.

The IEA told ministers that a few clean energy technologies are currently on track to meet its 2 degree C Scenario (ETP 2DS) objectives. Cost reductions over the past decade and significant annual growth rates have been seen for onshore wind (27%) and solar photo-voltaic (PV)(42%). This is positive, but maintaining this progress will be challenging.

The summary of the report to ministers continues:

Government targets for electric vehicles stock (20 million by 2020) are ambitious, as are continued government nuclear expansion plans in many countries, in both of these cases, significant public and private sector efforts will be necessary to translate plans into reality.

The technologies with the greatest potential for energy and carbon dioxide (CO2) emissions savings, however, are making the slowest progress: carbon capture and storage (CCS) is not seeing the necessary rates of investment into full-scale demonstration projects and nearly one-half of new coal-fired power plants are still being built with inefficient technology; vehicle fuel-efficiency improvement is slow; and significant untapped energy-efficiency potential remains in the building and industry sectors.

The transition to a low-carbon energy sector is affordable and represents tremendous business opportunities, but investor confidence remains low due to policy frameworks that do not provide certainty and address key barriers to technology deployment. Private sector financing will only reach the levels required if governments create and maintain supportive business environments for low-carbon energy technologies.

There is a detailed summary of progress of the various technologies to reduce CO2 emissions on The Stump blog.

From the chunky bits archive. Not much in this piece written the day after Peter Slipper became Speaker that I would want to change really except to acknowledge that the man was capable of keeping better order at question time than his predecessor.

Labor’s contempt for parliament shows through. Even a cursory glance at this morning’s front pages will tell you that Peter Slipper’s reign as speaker of the House of Representatives is going to be an eventful one. References to past indiscretions and current investigations into claims for expenses are not the ingredients for a peaceful time.

There was not much respect, nor dignity, shown for the highest parliamentary office in the land by the Sydney Daily Telegraph for example. Enlarged ears, a rats tail and barely visible photo-shopped whiskers are not designed to add gravitas.

Yet the Labor government knew this would be the kind of reception awaiting its choice as the new speaker after the resignation of Harry Jenkins. If parliament becomes a complete laughing stock – as it most probably will when it resumes next year – the government just doesn’t care.

The whole atttitude towards what happens in the House of Representatives these days is that it is nothing more than a necessary inconvenience in the way of getting on with running the country.

Dull and boring. At the risk of attracting a comment that this item typifies this little daily column, I bring you the news of the sister city relationship just entered into by Boring, Oregon and Dull, Scotland.

“Leaders know you have to watch your back because you never know who will put a knife in it.”

— Roderick MacFarquhar, a historian of Communist China, on reports that officials were wiretapping one another.

Winds of change fail to sweep up Gillard