In today's Media Briefs: Gordon Brown responds to Rupert Murdoch ... News Corp considering using editors as lobbyists ... The Hoff could quite ... did Hollywood pay bribes to China? ... and more ....

Front Page of the Day. The Leveson Inquiry into the British media had its second bout with the Murdochs — Rupert and son James — over the past two days, and The Times — a News International-owned newspaper — was happy to toe the company line on its front page this morning: 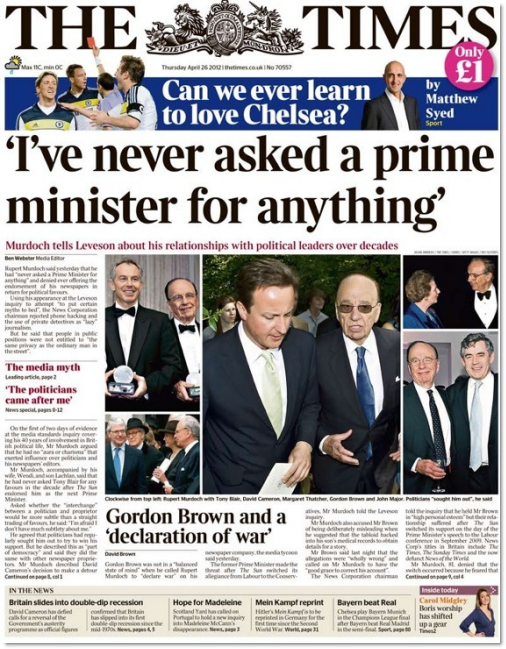 The Department of Corrections. Meanwhile, The Australian newspaper keeps its recent trend of hilarious corrections coming with this effort this morning, clarifying the record on former Greens leader Bob Brown and his Earth-to-Sun distance mathematics:

“Gordon Brown has denied he pledged to ‘declare war’ on News Corporation and called on Rupert Murdoch to correct the account he gave on oath at the Leveson inquiry of a 2009 phone call between them.” — The Guardian

Jeremy Hunt: “The idea I was backing BSkyB bid is laughable”

“Culture secretary Jeremy Hunt has said accusations that he backed News Corporation’s bid for BSkyB are ‘laughable’ and ‘categorically’ denied allegations of a ‘back channel’ giving News Corporation the ability to influence decisions.” — journalism.co.uk

“In front of a British government panel today, Rupert Murdoch denied that he tried to wield political influence or use his media holdings to further the business interests of News Corp.” — The Atlantic Wire

“Joe Muto, formerly known as the Fox News Mole, reported on Twitter this morning that he received a visit from the District Attorney’s office at 6.30am. ” — Gawker

Did Hollywood pay bribes to China

“The Securities and Exchange Commission has begun an investigation into whether some of Hollywood’s biggest movie studios have made illegal payments to officials in China to gain the right to film and show movies there, according to a person with knowledge of the investigation.” — The New York Times

Rupert never asks for anything, he just thinks out loud.