The law, banning senior Mubarak-era officials who served in the past 10 years from running for office, is finally up and running, writes Vickie Smiles, a writer and resident of the Egyptian city of Alexandria.

This week, Egypt’s military rulers, the Supreme Council of the Armed Forces (SCAF), dashed the hopes of presidential candidate and Hosni Mubarak’s last Prime Minister, Ahmed Shafiq, by approving a law they didn’t need to, which was created by an elected parliament with no real power.

The law, banning senior Mubarak-era officials who served in the past 10 years from running for office, had been passed by the Islamist-dominated parliament but lay dormant without SCAF endorsement.

Shafiq is the last of four prominent candidates to be eliminated from the race, which begins next month with two days of voting on May 23-24 and a possible run-off on July 15-16.

So far 11 have been disqualified, including the only woman, Bothaina Kamel, 49, who failed to get enough signatures for registration and Ayman Nour, 48, head of the Ghad El-Thawra Party, who fell because of a conviction in a political trial.

Suleiman would have eventually been caught by the law that banned Shafiq but was eliminated earlier for not having the required signatures.

Abu Ismail was ousted because his late mother held American citizenship (which he had vehemently denied) and Al-Shater was disqualified because of extensive periods he had spent in prison.

The Brotherhood, nevertheless, had been smart enough to hedge its bets on Al-Shater by registering another nominee, Mohamed Morsi, the head of its Freedom and Justice Party.

With Suleiman out of the race it was thought that Shafiq would capture the votes of SCAF supporters and those longing for a return of the strong arm of security so effectively provided by Mubarak’s loyal ministers.

SCAF’s decision to validate a law that could just as easily have been ignored took everybody by surprise and effectively reduced the field to three front runners: Amr Mousa, foreign minister before he became head of the Arab League, the aforementioned Mohamed Morsi and Abdel Moneim Aboul Fotouh, expelled from the Muslim Brotherhood last year for his liberal views and for wanting to run for president when the Brotherhood had said it would not field a candidate. 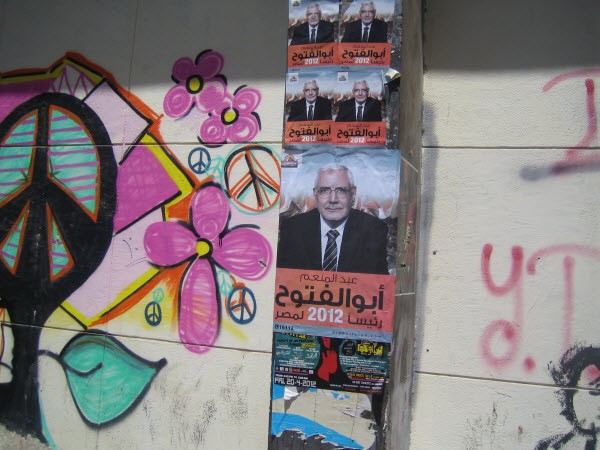 Mousa, was not affected by the law that ditched Shafiq because he left the ministry more than 10 years ago SCAF and its unbending leader, Field Marshal Hussein Tantawi, also have the capacity for an even bigger surprise in how they deal with the yet-to-be written constitution.

Tantawi has indicated it must be drafted before the election, a well nigh impossible feat as the 100-member constitutional committee tasked to write the perfect document has yet to be selected.

Parliament had previously formed the committee but it was disbanded after a public outcry over picking a team with a heavy Islamist majority.

So the question remains. Will Tantawi use the constitution as an excuse to postpone the election and thus renege on his promise of handing power back to the people on July 1?

Of all the candidates, Mousa has the strongest name recognition from his years in the Arab League and should benefit from the perception that he was not a “Mubarak man”. His anti-Israel statements are also popular, although he has said that he will honour the Camp David peace accord.

Mousa, who insists he will only stay one four-year term, is also committed to choosing a vice-president from the youth that led the January 25 (2011) revolution.

Morsi has some catching up to do in terms of matching the popularity among Islamists (including the ultraconservative Salafis) enjoyed by Al-Shater but he may well benefit from the perception that Al-Shater will be pulling the strings behind the scenes.

It helps that he is campaigning with Al-Shater under a banner with both their faces.

Fotouh, despite his “independent” and more liberal Islamist ticket will also appeal to many Muslims because of his past Brotherhood connections, as well as those who cannot bring themselves to vote for someone like Mousa who used to work for Mubarak.

He’s clearly targeting a broad spectrum of voters and now that Abu Ismail is out of the race he wins hands down in the number of posters plastered around Egypt.

“The nation belongs to all Egyptians, whether they are Christians or Muslims, men or women, Islamists or have leftist or liberal ideologies,” said Fotouh in a recent interview with Christianity Today.

“I run as an independent, not representing any political party or power. I have no administrative or organizational business with the Muslim Brotherhood now. But this does not mean that a person should give up his ideologies. I’m still proud of my progressive, enlightened, moderate Islamic ideologies, and that has been known about me for 42 years”.

There are other candidates, including the famous Islamist thinker and lawyer Mohamed Saleem al-Awa, pro-revolutionary Nasserite candidate, Hamdeen Sabahi, and the youngest of all Khaled Ali, a prominent lawyer and fierce defender of the Egyptian working class, but its too early to say how they will fare against the high-profile ones.

Whatever happens over the coming weeks, nothing will match the theatre of, and disappointment felt by Abu Ismail, who continues to argue that his demise was a ploy and a plot to deny him the chance to become president.

Finding it almost impossible to admit that his late mother’s American citizenship brought him down, he is still out there blaming everybody else.

On April 17, Abu Ismail’s campaign manager, Gamal Saber, appeared on Egyptian TV saying the documents presented by the election committee about Abu Ismail’s mother being a US citizen “are not worth the paper they were printed on”.

Saber’s next comments were almost unintelligible but his piece de resistance was to accuse the presenter of being Jewish and receiving $1 million from the Israeli government.

Twenty-four hours later, on another program, he was at it again,

Oh! The wonder of Egyptian politics!

As further testimony to the chaos of the Egyptian presidential elections, Mubarak’s last prime minister, Ahmed Shafiq, may be allowed back in the race after the electoral commission announced that his appeal was successful. The commission has referred the law that had been used to disqualify Shafiq to the Supreme Constitutional Court to review its constitutionality. The law had been drawn up by the Islamist dominated parliament but was ineffective until Egypt’s military rulers decided this week to give it their approval. If the Court rules against the law and Shafiq is allowed to run, what of the military’s decision to effectively remove him?
Confusing – you got it! (Vickie Smiles – Alexandria)