ABC’s bad Apple report. It appears the ABC newsroom has jumped the gun by reporting this morning that Apple has recorded a profit for the three months to the end of December of $12.6 billion. This despite the announcement not being scheduled until 2pm Pacific time in the US on April 24 — which is 7am EST time tomorrow in Australia — and the results for December are for Q1 — not the Q2 results that will be announced tomorrow. The first news bulletin on ABC 891 Adelaide at 8.30am EST reported (listen to the audio here):

“The technology firm Apple has announced another record quarterly profit. It made a net profit of $12.6 billion for the 14 weeks until the end of December. That’s more than double nett income for the same time last year.”

It was repeated on ABC 702 Sydney at 9.31am. (Listen to the audio here). The Apple report was subsequently reported by other ABC radio stations this morning, including:

Crikey contacted the ABC for comment but had not heard back from them at the time of publishing. — Leigh Josey

Front page of the day. The Independent in the UK reports more black clouds over the eurozone: 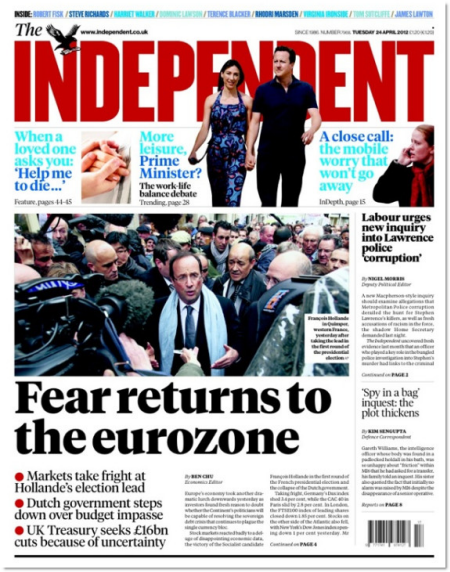 The Department of Corrections. Now you know Nigeria is four times bigger than Victoria. From today’s Sydney Morning Herald: 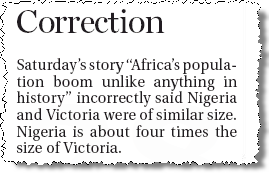 ABC settles out of court over Paper Giants case

“Alasdair Macdonald, the former husband of magazine editor Ita Buttrose, has settled his defamation case against the ABC out of court.” — mUmBRELLA

“Evgeny Lebedev, the proprietor of the London Evening Standard and Independent, has told the Leveson inquiry he and his father Alexander have spent £75m keeping the titles afloat over the last three years.” — The Guardian

60 Minutes under fire over interview

“Tony Byrne, the father of Caroline Byrne, has slammed 60 Minutes for reportedly paying Gordon Wood for an interview, tipped by the Daily Telegraph to be some $200,000.” — TV Tonight

That’ll teach companies not to do embargoed press releases. Or to make really sure that they put local time and dates for release on them