Joye: what inflation means for RBA interest rates in May

With much talk about the ABS inflation data and the potential ramifications this will have for the RBA's May rates decision, I thought I would pull together my own "cheat sheet", writes Christopher Joye of Property Observer.

With so much talk about tomorrow’s ABS inflation data and the potential ramifications this will have for the RBA’s rates decision at its May board meeting, I thought I would pull together my own “cheat sheet”.

In brief, this guide combines the March quarter “core” inflation numbers with the inflation measured over the preceding three quarters to give a March 2012 year-on-year result. The RBA has become increasingly wary of historical revisions to the ABS’ underlying inflation data (known as the “trimmed mean” and “weighted median”), and it is likely to place significant emphasis on the broader results over the past six and 12 months.

By way of background, the RBA has worked hard to prepare the public and financial markets for a cut in May subject to the outcome of the March price data. Predicting a cut if inflation prints low is easy. The much more difficult challenge was anticipating the RBA’s decision to hold rates steady in February, March, and April, which caught some experts unawares.

Of the 22 economists polled by Bloomberg (I have also added in the ALP’s Stephen Koukoulas), none are predicting an especially high core (“trimmed mean”) inflation print: the maximum quarterly estimate is 0.7% from Credit Suisse, JP Morgan, and Nomura (see first chart below). At least seven economists are expecting a relatively low core inflation number of 0.5%. Given the currency appreciation, declining import prices, weak producer prices, and various surveys pointing to benign retail prices, it’s possible that inflation is assessed to be even lower than 0.5%. 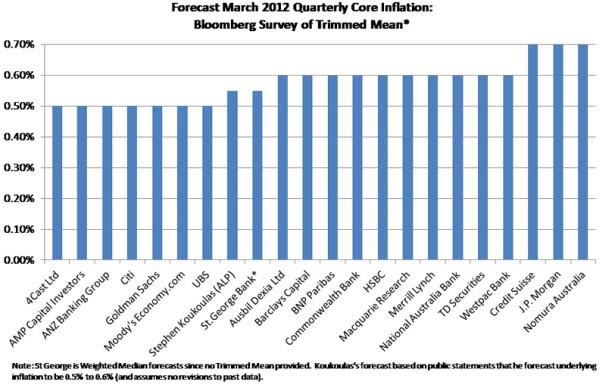 Of course, the flipside of this coin would be an upside surprise. Nobody is projecting inflation breaching the top of the RBA’s target 2% to 3% per annum band in the March quarter. A positive “surprise” would be anything greater than 0.7%.

It is also interesting to observe that the economists’ year-on-year expectations are all universally anodyne. Only two houses (Credit Suisse and Nomura) are predicting that the 12-monthly result with hit the mid-point of the RBA’s target band at 2.5%, which is where the RBA believes inflation currently stands. 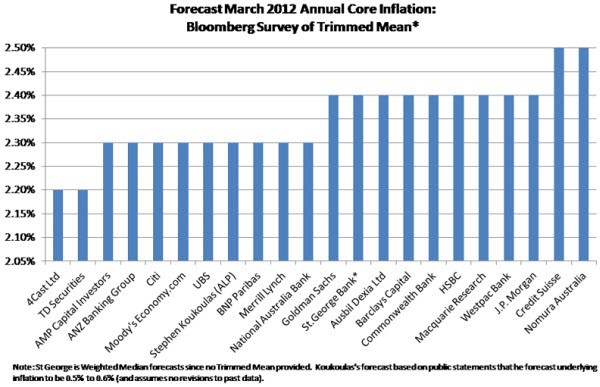 The question is then what all of this means for what the RBA (or, more precisely, its board) decide to do in May. I’ve taken the RBA’s latest estimates of core inflation in Australia over 2011 and combined these with a range of hypothetical outcomes in March. I’ve then offered up my own opinion of what the RBA might do — subject to global events, revisions to past data, and changes to bank lending rates — in the far right-hand-side column.

*Christopher Joye is a leading financial economist and a director of Yellow Brick Road Funds Management and Rismark. This article — first published at Property Observer — is not investment advice.