Poll confusion in Labor death knell. Labor would lose both chambers if an election were held now,” the headline in The Sydney Morning Herald screams. Fresh disaster? Is it all over? Well, not exactly. The “both chambers” story is Peter Hartcher giving Labor both barrels. Taking anonymous internal ALP analysis from a single poll in March, rather than an average […]

Poll confusion in Labor death knell. Labor would lose both chambers if an election were held now,” the headline in The Sydney Morning Herald screams. Fresh disaster? Is it all over? Well, not exactly.

The “both chambers” story is Peter Hartcher giving Labor both barrels. Taking anonymous internal ALP analysis from a single poll in March, rather than an average of polls over time, the finding is “an absolute worst-case scenario” rather than a likely one, according to, erm, the SMH‘s own pollster John Stirton at Nielsen — as he notes halfway down the story. Oh, and also the use of state breakdowns to arrive at Senate tallies gives you error-prone results, according to Stirton.

Apart from that, it’s evidence-based reporting, and not at all an Australian-style example of Hartcher’s endless barracking. Silly stuff. — Guy Rundle

Plug pulled on nail-biting V8 race. It was one of the most exciting finishes in recent V8 Supercar racing history. But as Jamie Whincup’s Commodore loomed large in the mirrors of Mark Winterbottom’s Falcon around the streets of Hamilton in New Zealand, with just five laps to go, television viewers in Australia were left in the dark. When the feed was returned, the race had been run and won.

Commentator Matthew White told viewers “we’re as sorry as you are”. Channel Seven was absolving itself of responsibility last night — V8 Supercars Australia has its own broadcast unit that feeds the footage to Seven and other broadcasters. It said in a statement on Facebook:

“The broadcast issue for Australian viewers today was caused by the failure of a technical piece of equipment. This highly irregular failure bypassed all levels of redundancy that normally activate automatically.

“The Seven Network were not responsible for any part of the failure. We would again like to offer our sincere apologies.”

For furious race fans who missed the action, the final 11 minutes of the race have been posted on YouTube. It’s the latest insult for rev-heads, with sponsors now joining fans in condemning Ten for pulling its live, high-definition coverage of formula one races from One in favour of the standard-definition channel. — Jason Whittaker

Front page of the day. France may have a new president as challenger Francois Hollande has taken the lead over incumbent Nicolas Sarkozy after Sunday’s voting. 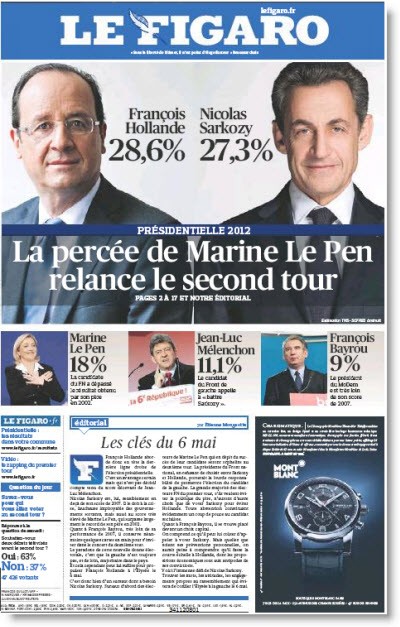 The Department of Corrections. Internal research probably showed its readers were cat people. From The News, from New Glasgow in Canada, on April 20: 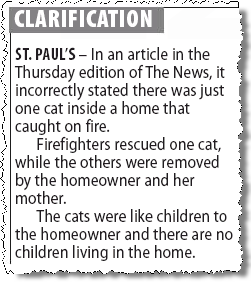 “The Post just had a rough few days. It was shut out of the 2012 Pulitzer Prizes, which were announced Monday. On the same day, journalists here had to accept or reject The Post’s fifth buyout offer in nine years. The union representing newsroom workers says that at least 32 accepted, and probably more. And the prior Friday, a Post blogger, Elizabeth Flock, resigned.” — The Washington Post

MPs ‘pressured to hold back on hacking probe’

“News of the World journalists “raked over” the private lives of MPs investigating alleged phone hacking and put one of its most vocal members, Tom Watson, under surveillance, a new book on the hacking scandal has claimed.” — journalism.co.uk

“Australia’s major newspaper mastheads and wire service offered about 100 entry-level positions over the past two years, despite a record 4750 journalism school enrolments.” — The Australian

Evans quits The Oz after seven months as commercial editor

“The Australian‘s commercial editor Louise Evans has resigned after just seven months in the role.” — mUmBRELLA

Advertisers to break away into full-fledged TV shows

“Advertisers will move from 30-second commercial breaks to creating entire television programs, after the country’s largest marketing group announced it had set up a division to make TV shows for its advertising clients.” — The Age

As opposed to a piece of equipment that wasn’t technical, like the piece of wet string Seven usually uses for its broadcasts.

Good catch on the Hartcher piece, Guy – truly dreadful. With the added problem that it’s based on a half-Senate election, which can’t legally be held before August 2013.