Raising taxes on the poor

Perhaps Joe Hockey will borrow the next stage of the American Republican solution to economic problems.

Raising taxes on the poor. Perhaps when jovial Joe Hockey returns from London he will borrow the next stage of the American Republican solution to economic problems.

This week the House Majority Leader Eric Cantor (R-VA) made it clear that Republicans are interested in raising taxes on the poor while lowering tax rates for everyone else as part of any comprehensive tax reform plan.

This was the Cantor response to a question by ABC’s Jonathan Karl:

CANTOR: We also know that over 45 percent of the people in this country don’t pay income taxes at all, and we have to question whether that’s fair. And should we broaden the base in a way that we can lower the rates for everybody that pays taxes. […]

KARL: Just wondering, what do you do about that? Are you saying we need to have a tax increase on the 45 percent who right now pay no federal income tax?

CANTOR: I’m saying that, just in a macro way of looking at it, you’ve got to discuss that issue. … How do you deal with a shrinking pie and number of people and entities that support the operations of government, and how do you go about continuing to milk them more, if that’s what some want to do, but preserve their ability to provide the growth engine? … I’ve never believed that you go raise taxes on those that have been successful that are paying in, taking away from them, so that you just hand out and give to someone else. 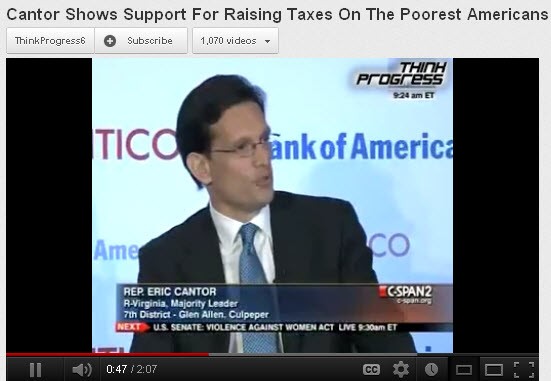 I’m sure views like that would fit in nicely with our shadow Treasurer Joe Hockey’s call for reducing Australian welfare payments down towards Asian country levels.

Different strokes for different folks. Never let it be said that Crikey does not present the views of writers with different backgrounds and opinions. There I was this morning confronted with the leading story on the website describing “the unhealthy trifecta” of “smokes, booze and gambling”.

For a former liquor store owner who over the years had worked for tobacco companies and started an internet bookmaking business it made interesting reading as the first cigarette of the day began to appease a mind, mellowed by the previous night’s red wine, that was contemplating the financial loss from Kevin Na withdrawing from the Texas Open after hitting seven over par.

Make it a quadrella by adding tattoos. With that little matter of conflict of interest out of the way, may I suggest that Dr Charles Livingstone, from the School of Public Health and Preventive Medicine at Monash University who wrote that trifecta story, add a fourth category to his list? Tattoos, I discovered this morning while browsing through the journal Alcoholism == Clinical and Experimental Research, are an indicator of higher than average levels of alcohol consumption.

The full article Tattoos, Piercings, and Alcohol Consumption is behind those dreaded paywalls but here is the abstract:

Objective: Previous studies have found a link between body tattoos or piercings and risky behavior. However, these studies only examined survey data but not real behavior.

Methods: Young men (mean = 20.6 years) and women (mean = 20.2 years) leaving a bar were asked whether they wore tattoos and piercings or not and were requested to breathe into a breathalyzer in order to evaluate their alcohol consumption.

Results: It was found that participants with piercings and/or tattoos as well as combined piercings and tattoos revealed higher levels of alcohol consumption.

Conclusions: Piercings and tattoos could serve as signs of alcohol consumption for educators, parents, and physicians.

The IO9 website gives some more details of this research.

For four Saturday nights, 99 undergraduate business students in the west of France became temporary researchers. In four separate cities, they waited outside bars that catered primarily to college students, and surveyed youths as they left the drinking establishments. Almost 2000 subjects, 20 years old on average, told the interviewers how many tattoos and piercings they had, and underwent breathalyzer tests to determine how much alcohol they had consumed that night.

The study found that people with body artwork had more alcohol on their breath than those without. But the researchers also pointed out that in a previous study looking at tattoos and behavior, people who only had one tattoo tended to act more like their un-tattooed peers when it came to risky activities like drinking and unprotected s-x. It was only when the researchers started looking at those with two or more tattoos that they noticed an increase in high-risk conduct. And it wasn’t until the tattoo count hit seven that the risky behavior really shot up.

Perhaps Dr Livingstone should be campaigning for new laws to limit tattoos to one!

A sad day for we old-timers. A fitting farewell from the BBC. 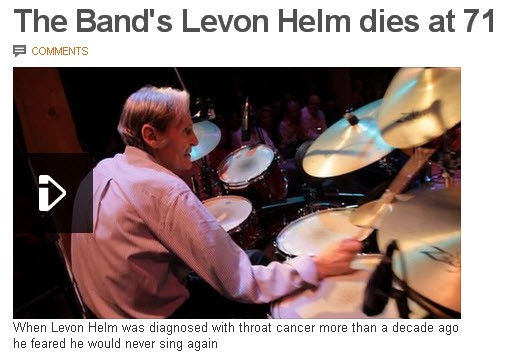 And the sound before the cancer struck: 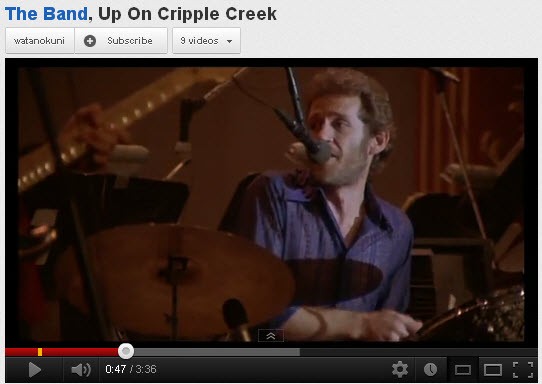 Farewell Levon, one of the best in the band.