It's always a thrill to witness those moments when true history is made and, as David Salter writes today, the mantle of News Limited's number one brown-noser has passed from Terry McCrann to Geoff Elliot.

His master’s voice: thoughts of Rupert’s deputy. It’s always a thrill to witness those moments when true history is made. This morning, the mantle of Undisputed Heavyweight Brown-Nose Champion of News Limited passed from long-serving Murdoch business writer Terry McCrann to his young challenger, Geoff Elliott. Elliott, the business editor of The Australian, claimed the title in a unanimous points decision with today’s fawning piece on his boss, News Corp No.2 Chase Carey, which ran as the lead feature in The Deal, the monthly insert mag edited by Lyndall Crisp.

It seems Elliott was quite impressed with this $30 million-per-year New Yorker with the silly twirled ends on his handlebar moustache. “His gaze is firm. There is no hesitation,” drooled The Oz business hack and former Washington correspondent. Carey is “direct and clear-minded” and has been an “outstanding success” with “undisputed talent as an executive”. He’s “likable and apparently without fear”.

Had enough? There’s more. Throughout his career Carey has shown “an ability to remain unflappable and negotiate without histrionics”. He “marries steeliness with a laid-back manner” while he “disarms and charms”. We get the idea, Geoff.

Yet after three solid pages of this hem-kissing twaddle we still don’t have any useful handle on what Murdoch’s deputy chairman, chief operating officer and the president of News Corporation is really like. Less than 20% of the feature is direct quotes from Carey — a measure of how little he had to say (or how little of what he said was worth reporting). The first quote is “How are you going?”. Now there’s a scoop.

None of this stopped Elliott bowling up long hops to his boss in a transparent attempt to help him get News off the hook from its current difficulties. And if Carey had trouble actually forming the right words, Elliott was there to put them in his mouth. “What Carey is alluding to,” he writes, is that “sorting out the problems in Britain is critical to stemming a reputational contagion that can take hold even with no basis in fact.” No basis?

But anyone still troubled by the News of The World phone-hacking outrages would have noted Carey’s assurance that “from a regulatory perspective we’re going to put things right”. Not from a moral perspective, mind, or from the perspective of changing the ethical culture within News, but just from a “regulatory” perspective. What a comfort to us all. –– David Salter

News’ creative excellence. There were a number of worth winners in the strictly internal 2012 News Limited Creative Excellence Awards.

Crikey‘s favourite was the winner for “best multi-platform execution” taken out by Anna Bandini, Nathan Lister and Grant Gatehouse from the Gold Coast Bulletin for their “Bikini Parade” triumph. For the uninitiated, the 2011 flesh fest involved 357 women walking 1.6 kilometers across the Glitter Strip’s main beach in the “world’s largest bikini parade”.

A lesson in modern journalism. It takes just day for a tweet with embarrassingly ignorant spelling …

… to become a Top 10 list linkbait article about Twitter spelling mistakes. Oh, and the word is “cologne”. — Stilgherrian

Front Page of the Day. The NT News leads today with the ATSB report about a Jetstar pilot who aborted a landing from Darwin into Singapore because he was texting. As Crikey‘s aviation writer Ben Sandilands wrote:

“Think about the situation. A Jetstar flight with up to 220 or more passengers on board, is low over the ground at Changi Airport, its wheels up until the last moment, and its flaps incorrectly set for a landing, while a person behaving like a moron in charge of jet airliner is so absorbed in his phone he is unaware of the dangerous situation that he has allowed to occur.” 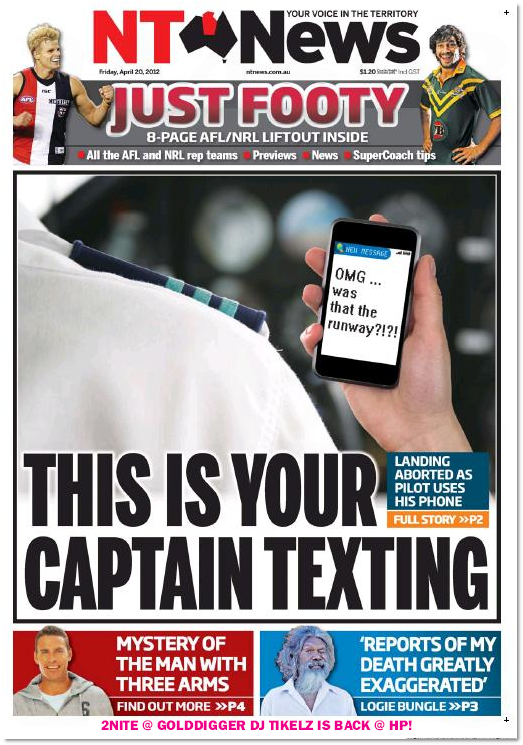 Leveson inquiry: James and Rupert Murdoch to appear next week

“News Corporation boss Rupert Murdoch and his son James Murdoch are due to appear before the Leveson inquiry next week, with at least two days dedicated to their evidence.” — journalism.co.uk

“Rupert Murdoch faces a growing legal challenge in the heart of his global media empire as lawyers representing alleged victims of phone hacking on US soil begin gathering evidence ahead of possible court action.” — The Guardian

Why doesn’t the public trust the press any more?

“NYU journalism professor Jay Rosen published a post Wednesday with five explanations for why public confidence in the press is falling. He soon added a sixth, thanks to feedback from a journalist on Twitter.” — Poynter

“The New York Times Co. raised eyebrows among media watchers this morning when it announced that online ad revenue had slid from a year ago.” — PaidContent

“A vicious battle for control of APN’s largest shareholder, the Dublin-based Independent News & Media PLC, has led to the resignation of Gavin O’Reilly as chief executive of the Irish group and as chair of its Australian-based offshoot.” — The Sydney Morning Herald

How social media will change the Olympics

“This year’s Olympics are being branded by organisers as the world’s ‘first social Games,’ and it’s not hard to see why.” — Mashable

Lithuania to produce Mother and Son

“It remains the finest sitcom Australia has ever produced, and now Mother and Son is to have a local version produced in the tiny Euro-nation of Lithuania.” — TV Tonight

the ue usual 5 News Corp stories, where would you be without them? Nice dig on the Creative awards too…starting to smack a little of a vendetta

The 2005 “Working the Refs” article linked off the Poynter article was quite interesting. Thanks.