As Budget speculation reaches fever pitch over a looming Max Moore-Wilton-style disembowelment of the federal public service at the hands of Wayne Swan's surplus fetish, a survey from the major union representing Canberra cardigans has revealed a tranche of serious workplace issues plaguing the APS. 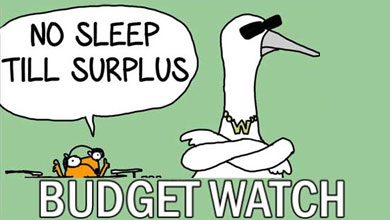 As Budget speculation reaches fever pitch over a looming Max Moore-Wilton-inspired disembowelment of the public service at the hands of Wayne Swan’s surplus fetish, a fresh survey from the major union representing Canberra cardigans has revealed serious workplace issues have already infected the federal bureaucracy.

In December, Finance minister Penny Wong announced that Labor — to which the CPSU is affiliated in the ACT — would rip a massive $700 million from public service capital expenditure and increase the so-called ‘efficiency dividend’ — in which senior mandarins are forced to dream up ingenious ways of slashing costs — from 1.5% to 4%.

Seventy-nine percent of respondents reported increased workloads and targets, nearly 60% increased customer waiting times, and over half reported increases in unplanned leave. Delegates also reported that vacant positions were not being filled and nearly half witnessed staff doing tasks they weren’t trained in.

At Human Services, “clients” appeared to have embarked on a massive increase in feral activity, unleashing hostile threats and aggression against individual staff battling to deal with the rationing deigned by the former student politicians running the country.

Wong’s handy hints included saying “no” to contractors and curbing spending in areas the private sector would never dream of touching including travel, hospitality, advertising, printing and training.

As Crikey noted earlier this week in its “No Sleep till Surplus” Budget preview, departments including Human Services, Customs, Treasury, Veterans Affairs, Climate Change, the Bureau of Statistics, Education, Employment and Workplace Relations and Resources, Energy and Tourism have already begun to scratch around for scalps to acquiesce to Swan and Wong’s diktats.

The union says the measures will effective remove $2.2 billion from the public sector, which will in-turn create pressure on frontline federal service providers like doctors and mental health staff.

Some of the comments received from delegates makes for interesting reading. In one instance, a DHS frontliner reported that a customer was kept waiting for so long on the phone that they had entered a deep sleep. “They were snoring,” the delegate explained. The customer service assistant sought advice from management about what to do in such an instance — the response was to terminate the call if the client could not be promptly roused.

“He advised that the call should be terminated after 30 seconds if the customer does not wake. This looks good on the stats because it is a short call, and it appears that we are processing more customers. However it is arguably poor customer service.”

Another DHS worker reported phone threats from irate welfare recipients had exploded in the first few months of the year. “There are often 20 metre queues out the door. Staff are being abused by people all the time because they have to wait too long,” said another.

Queues on the phone had increased from two minutes to 30 minutes, enraging punters who were calling from mobiles charged by the second: “When they finally get through, we aren’t able to help them and we are abused. Staff are being told to get the customers to do more online however this often doesn’t work and then we have those aggravated customers on the line as well.”

The full 12-page comments document contains damning anecdotes from nearly all departments, including the Australian Bureau of Statistics, the Australian Taxation Office, the Bureau of Meteorology, Customs and the Department of Agriculture, Fisheries and Forestry. Many report stressors and cuts in frontline client-facing roles, despite the Prime Minsiter’s pledge to remove these positions from her chopping block.

At DEEWR, the situation was even worse than under John Howard: “After 13 years in the APS I have never seen it in such dire straits. It will get worse before any improvements occur and the public will lose confidence in the APS and related services over time, which will undo all the hard work that we have been doing and further widen the gap between Indigenous and mainstream Australia.”

Over at Sandi Logan’s Department of Immigration and Citizenship, there were suspicions that ASIO-aping surveillance was afoot. “Management installed a new phone system that monitors our calls.” Luckily, all was not lost: they haven’t switched on the feature that tracks our toilet breaks yet, so we still have that to look forward to!”

*Crikey will be inside the budget lock-up wearing special First Dog on the Moon t-shirts on Tuesday, May 8. A late competitor to the planned “No Sleep till Surplus” motif is a riff on AC/DC’s Back in Black.

Somehow, I doubt that the government organisation ASIO is having to work around an efficiency dividend. Doubt that we’ll hear much chat about inefficient public sector workers re ASIO and Defence from the opposition either.

This story oozes senior and mid management incompetence. The taxpaying shareholders’ representatives (Swan and Wong) are demanding more efficiency to the tune of a pathetically low 1.5% to 4%. This is a level that a commercial operation would be ashamed to go for, and the complete absence of management accountability and ownership in the public is revealed.

The Wong/Swan requirement shaves an insignificant proportion off the spending that has bloated the public service inder Rudd and Gillard. But rather than take this on board and seek ways to make the departments work better, the mid management has merely become the lubricant by which the bullsh*t flows directly from the minister’s office to the front line and to customers.

Then we Crikey readers get the story about the high stress experiences that the workforce at the front line has inflicted on it. No solutions are offered. The only option seems to be for taxpayers to bend over for yet more inefficient and costly public quasi service.

As an example of management incompetence, I put forward one example from your story. A customer who is on hold to a DHS call centre is generating no work for the public servants until they actually come on line. Therefore long waiting times for service have absolutely no relationship with numbers of staff but everthing to do with the rostering of those staff and a customer service focus from management. This would include actively managing the queues, adequate training of staff, decent reostering and the flexibility from the workforce to allow management respond to customer needs.

@David Ferrarin hand – re your comment “Therefore long waiting times for service have absolutely no relationship with numbers of staff but everthing to do with the rostering of those staff and a customer service focus from management. ”

Presumably you have no real world experience because that statement is so ridiculous that i wonder if you are joking. How can you roster on staff if you haven’t got the money to pay them or are you suggesting you find volunteers who don’t mind no pay and no breaks? One person can only deal with so many people at a time so if, for example you have 5 operators and 10 people (which I’d say is a generous ratio) enquiring then 5 people are going to be waiting for as long as it takes.

Show me any business in Australia which could manage a 4% cut in its prices every year and still maintain the same quality of its outputs. Remember, this is 4% for existing operations as well as new work.

Hey Mike,
I agree that if 5 people are on the phones and 10 people are waiting, then there are only 5 people being serviced. Assuming no more calls come in, the 5 waiting calls are answered sequencially. Therefore the workforce answer 10 calls. If management arranged for 10 people to answer the phones, everyone would be answered quicker so customer service would go up. But the workload of 10 calls remains exactly the same. What you then have is an inefficient workforce, adequate to answer the calls but unproductive more of the time. This is a basic rostering management issue that well managed call centres deal with every day.

A call centre that handles say 1000 calls with an average handling time of 10 minutes does 10,000 minutes worth of work. If they are so disorganised that many of those callers have to wait half an hour to get answered, the result is disgruntled customers but the overall workload remains the same – 10,000 minutes of AHT.

I can understand incompetent middle managers, the main point of my previous post, doing nothing to improve rostering performance and allowing their customers to suffer and their front line people to go crazy with stress.