Nationals Senator Barnaby Joyce has accused the political editor of News Limited's Sunday newspapers of manufacturing a story about him lobbying Tony Abbott to lift the baby bonus to $10,000. Plus other media news of the day.

Getting the jump on The Avengers. Reviews of Disney’s hottest new release The Avengers — which premiered in Australia at a champagne and Midori infused soiree last night in Melbourne ahead of its Anzac Day release date — have been embargoed until April 20. But News.com.au and the Herald Sun ignored the embargo, pushing full steam ahead with a proudly proclaimed “First Aussie Review”.

The Block‘s back — but is it good value? Lights, cameras, action. Property is back on television. Not the overly earnest The Renovators, which has been dropped by Channel Ten, but perennial favourite The Block on Channel Nine. It’s on the air for the fifth time since 2003.

Monday night’s 1.4 million debut ratings wasn’t quite matched Tuesday when a still very attuned 1.3 million tuned in for the preliminary knockout shows, which have eight couples become the final four who take viewers through the remaining 10 or so weeks. Interestingly it was the Melbourne viewers who strayed on the second night dropping from 508,000 to 466,000. The Sydneysiders tuned in in roughly equal numbers — 404,000 on debut and 390,000 on Tuesday night. The Block’s 2011 airing — which was ramped up to a remarkable six nights a week footage — ended with a dose of reality at its auction finale.

Three of the four houses in the Cameron Street, Richmond, offering failed to sell under the bright lights of the auctioneer’s hammer. There’s little doubt the producers of The Block 2011 paid above-market rates to get four houses in a row, given they are a rarity.

It could again face the same challenges of getting overly enthusiastic buyers to match the outlays incurred in The Block 2012, with the four South Melbourne houses in the current series costing $3,025,000 last June, plus subsequent ambitious renovation costs. — Jonathan Chancellor of Property Observer (read the full story here)

Sloan’s Australia Network attack unfair. In what could only be described as a complete pasting, Professor Judith Sloan has called for the axing of Australia’s international television broadcaster, the Australia Network, dubbing it “repetitive, pointless tosh”. Scrapping the service would save taxpayers millions of dollars, Sloan argues, largely based on what she saw of the service during a recent trip around Asia.

In the rapid-fire commentary around the government decision to kill the tender process for the network (about which we have had much to say here at the Lowy Institute) there have been others who, rather more gently, urged a review of the ABC’s approach to the Australia Network. The Australian Financial Review‘s Tony Waler argued for a “professional and effective” service, with “quality programming with an emphasis on news and current affairs … The ABC needs some of its best reporters, editors and anchors to be involved. A rebranded ABC Australia cannot serve as a dumping ground for the second-rate.”

The Australia Network’s content mix is obviously important, and there may well be scope for an independent review looking at whether programming meets audience needs and the service’s objectives. That review would no doubt involve a methodical and scientific survey of content, audience perceptions and satisfaction, which would remove the temptation to make snap decisions based on random anecdotal evidence. However, Sloan’s conclusion that “any notion that a contribution is being made to the soft diplomatic effort of Australia is simply laughable” is worth looking at.

Firstly, the Australia Network represents almost the entire government expenditure on public diplomacy, with most other platforms cut over the last few years as Australia’s foreign affairs infrastructure has been whittled away. Apart from DFAT’s website and the tightly-constrained activities at diplomatic posts, the Australia Network IS Australia’s so-called ‘soft diplomacy’. Axing it would be drastic, and would cut off one of Australia’s principal means of projecting its image, strengths and values to the world. — Alex Oliver of The Interpreter (read the full story here)

Front page of the day. Courtesy of Wales’ Western Mail, which reported:

“A Labour council candidate [James Brinning] has been suspended from the party after a series of offensive Facebook and Twitter postings including one in which he made a facetious death threat to teenage pop star Justin Bieber.”

Brinning’s views on latest pop sensation One Direction are, however, unknown. 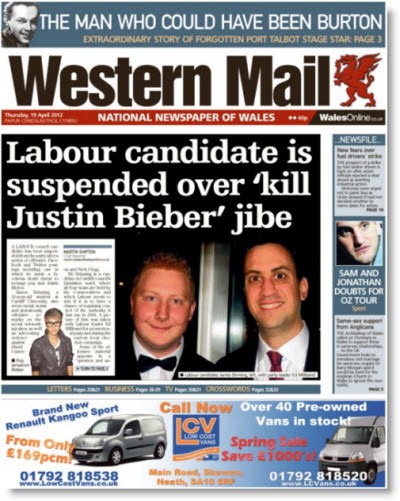 The Department of Corrections. An amusing correction in today’s Australian Financial Review referring to an erroneous Street Talk item from yesterday on Telecom New Zealand. The correction contained the wrong date — April 17 — indicating the item had actually been published on Tuesday. Will there be a correction for the correction?

“Rebekah Brooks is believed to be among 11 suspects in the phone-hacking scandal facing criminal charges after police sent their first set of files to prosecutors.” — The Sydney Morning Herald

“News Corporation said Wednesday it would suspend half of the voting rights of its non-American shareholders in order to comply with United States government regulations on foreign ownership.” — The New York Times

“News Limited chief executive officer Kim Williams today announced South Australian metropolitan newspapers are to be the first in the company to move to a seven-day newsroom, amid a series of key changes.” — The Australian

“The Logie Awards has apologised after broadcasting a photograph of actor David Gulpilil during the In Memoriam section, when it was paying tribute to actor David Ngoombujarra.” — TV Tonight