A new version of the yellow peril

Joe Hockey the macho-man, with his comments from Europe overnight, has just given me my first doubt about the inevitability of Labor losing the next election.

A new version of the yellow peril. Once they were going to come down and invade us. Now the Liberal-National would be Treasurer is just going to make us more like them. Reduce the spending on Australian pensions first with the wage reductions no doubt to come next.

Joe Hockey the macho-man, with his comments from Europe overnight, has just given me my first doubt about the inevitability of Labor losing the next election.

The reality of separation. From the team that brought us Big Brother comes the next reality TV special where in episode one the parents explain to the kiddies that Daddy has packed his stuff and is off to live with Astrid.

Yes. Divorce has hit the screens in Holland albeit not without some controversy.

“You should not want to harm children. This is a bizarre entertainment program on child distress. Did the parents ever the importance of their children think?” said the irate Christian Democrats MP Hanke Bruins Slot.

Over a million people watched episode one.

Out of this world. A picture like this surely makes you feel somewhat insignificant in the whole scheme of things. 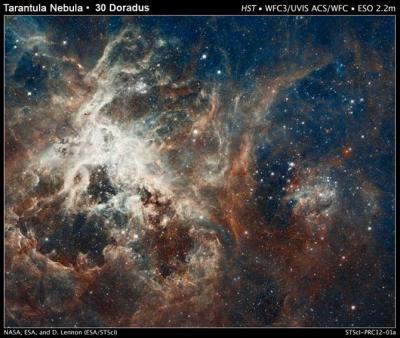 The image of 30 Doradus, a star-forming complex located in the heart of the Tarantula nebula, comprises one of the largest mosaics ever assembled from Hubble photos and includes observations taken by Hubble’s Wide Field Camera 3 and Advanced Camera for Surveys. Hubble made the observations in October 2011. NASA and the Space Telescope Science Institute are releasing the image to celebrate Hubble’s 22nd anniversary.

Can we sue the Morrison government? The calls are getting louder but the answer stays the same…

I got it on the dark web