The Media Monitors' charts sent Bob Brown permanently on his way with his highest ever ranking.

What can you say about Bob? Perhaps the only instance known to man where Brown and Green remained an acceptable coupling for longer than any fashion cycle, history will judge him kindly. Certainly our charts send him permanently on his way with his highest ever ranking. Not high enough, however, to oust Julia Gillard from top spot; the PM came under fire from Brown’s replacement Christine Milne who echoes the widely held sentiment that political not economic reasoning has led to the proposed budget surplus and a reversal of the Keynesian largesse that saw us through the GFC.

Campbell Newman still flies high, though some have suggested he was wearing the emperor’s new clothes at COAG in espousing a high court challenge to the carbon tax — which raised the uncomely spectre of seeing Barry O’Farrell clad in not much by his side.

Some relatively clear air this week around Craig Thomson, who heads downstream toward K-Rudd, himself in the unfamiliar position of contesting our wooden spoon with the likes of Barnaby Joyce who climbed 16 spots through proposing a doubling of the baby bonus for stay-at-home-mums while opposing modeling for Murray-Darling water cuts. But Joyce — ever happy to swim against the tide — stopped short of joining his Nationals colleague and Opposition Finance Spokesman Andrew Robb in support of bank rate rises. We watch, with interest. 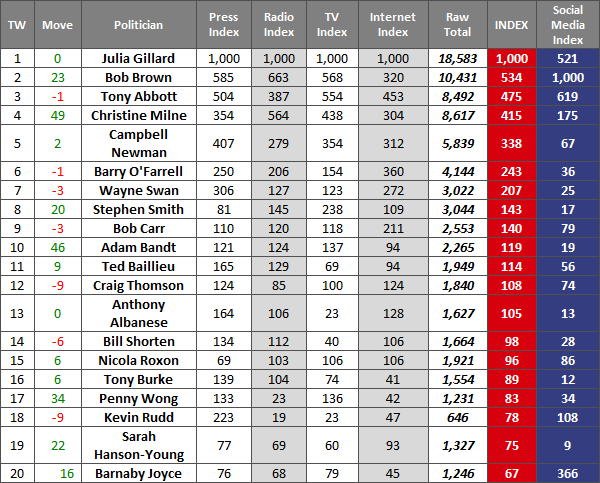 While he never quite cracked it in the main chart, Brown goes out with a Number 1.

The funny man showed better timing in his Gold Logie acceptance speech than did the Herald Sun in breaking the news early.