So who’s the mystery male Greens informant on the Canberra Times story? Numerous calls this morning turned up a very likely suspect and he's not from Lee Rhiannon's office. Plus other media news.

Brown hits out at Greens Crimes. The Canberra Times offered a unique take on the retirement of Bob Brown on Saturday: the Greens leader had quit, according to chief political correspondent Chris Johnson, after “worrying polling results” and “a year of internal pressure to make way for a new generation”. Brown has hit back today, in a strongly-worded letter to the editor:

The Canberra Times was alone in reporting, on its front page, that I resigned ”following a year of internal pressure to make way for a new generation” (”Back to basics for new Greens”, April 14). It was untrue. Your report said ”the new [Green] leadership regime [was] installed to address worrying poll results”.

Our polling is strong: 13 per cent, the Neilson poll says. You report that I have ”come under significant pressure from some elements of his party to step down”. By which elements? They’ve not contacted me.

This is entirely false.

Your informant, well known to, and kept very much at arm’s length by my office, is misleading The Canberra Times. He should be treated with some greater caution by your Chief Political Correspondent, because it is your readers who are ultimately misled.

So who’s the mystery male Greens informant? Numerous calls this morning turned up a very likely suspect, and he’s not from Lee Rhiannon’s office … — Andrew Crook

Probing The Age on its sub-editing. The Age’s breaking news feed on Twitter deservedly drew plenty of derision yesterday when it posted the “Baillieu bows to church s-x-abuse probe” headline … 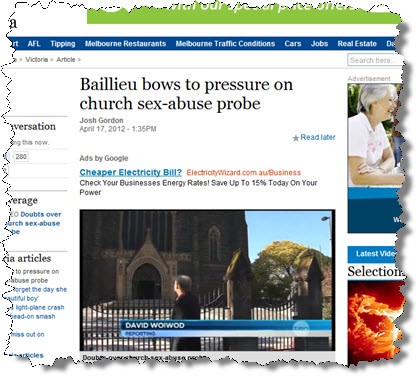 Was it a sub having fun or was it a sub ignorant of the house style guide? The guide reads: “probe: In text, use inquire, inquiry. In headlines, probe is allowed only in extreme need (it is not much shorter).” Sadly, style these days at the Spencer Street Soviet (can we still call it that?) is more likely to involve where to get the best CBD latte.

Department of Corrections. The Sydney Morning Herald corrects a story it wrote about the funeral procession in Brazil of Roberto Laudisio Curti, the 21-year-old student killed by a police taser last month. 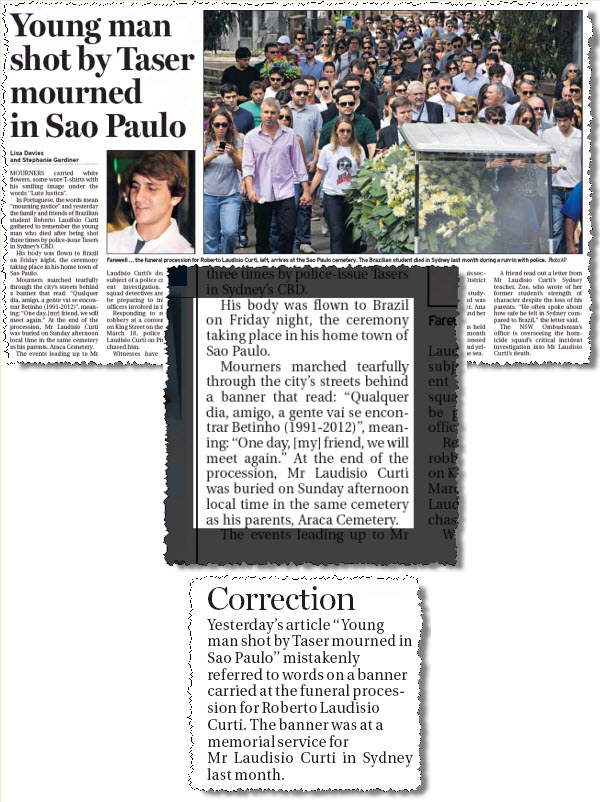 Front page of the day. A difficult day for Norway with the start of mass-murderer Anders Breivik’s trial. The headline on Norwegian newspaper Drammens Tidende translates to “pretty pathetic”. 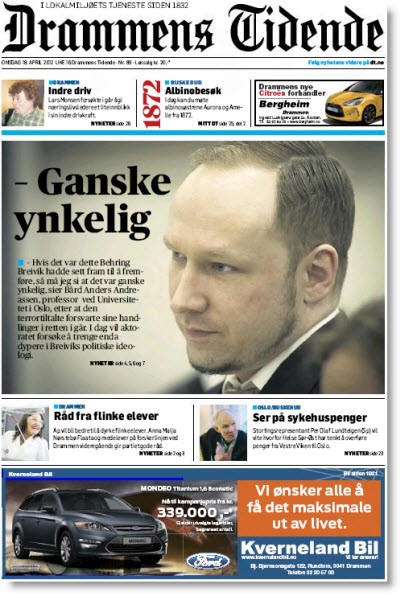 “The government’s controversial plans to allow intelligence agencies to monitor the internet use and digital communications of every person in the UK suffered a fresh blow on Tuesday when the inventor of the world wide web warned that the measures were dangerous and should be dropped.” — The Guardian

The little girl in the Pulitzer-winning photograph

“Mr. [Shah] Marai, the chief photographer in Afghanistan for Agence France-Presse, accompanied a reporter to Tarana [Akbari]’s house in Old Kabul on Tuesday morning, about four months after she became known as the young girl at the center of Massoud Hossaini’s Pulitzer Prize-winning photograph.” — The New York Times

“In an effort to woo ad dollars away from television, AOL Inc. said it would begin offering advertisers the ability to buy online video ads with the same formula used to purchase TV ad time.” — The Wall Street Journal

“A quick search for “thinspo” — the shorthand term used for these glorifications of the super-skinny — on Hashgram, a site that aggregates tags on Instagram photos, pulls up a bunch of disturbing images.” — The Atlantic Wire

“With exactly 100 days to go until the London 2012 Olympic Games, Foxtel has revealed details of its mammoth broadcast, billed as ‘the most extensive coverage of an Olympic Games ever seen in Australia.’ The Pay TV provider will broadcast across eight brand-new, dedicated channels that will be free to residential sports subscribers available in both High Definition and Standard Definition.” — TV Tonight

Are there any Fairfax subbies left whose age and / or IQ is in double figures?