Government ducks and weaves on Assange

After extraordinary delays in responding to FOI requests about Julian Assange, the government has served up a whole lot of nothing.

After dodging and delaying FOI requests about its consideration of the case of Julian Assange for months, the government has blocked the release of any material that would reveal its internal legal deliberations over Assange’s extradition to the United States.

Greens Senator Scott Ludlam made an FOI application to the Department of Foreign Affairs and Trade and Prime Minister and Cabinet and the Attorney-General’s Department and their respective ministerial offices in December seeking documents relating to “the potential extradition or temporary surrender” of Assange to the US.

The response of the government has been a litany of excuses and self-justifications.

After several months, the Department of Foreign Affairs and Trade is still seeking to avoid responding. In March, DFAT said it would take them a remarkable four months to process the request and demanded that Ludlam justify why a request for documents about Assange’s extradition was a matter in the public interest. At the end of March, DFAT demanded another 30 days on top of the four months, on the basis that they’d only just realised they would have to consult with foreign governments over the request.

The Department of Prime Minister and Cabinet quickly fobbed off the request entirely by claiming that the request “would unreasonably divert the resources of the department”, an excuse permitted under s.24 of the FOI Act.

So far only Attorney-General’s has responded, after trying to unsuccessfully convince the Information Commissioner to re-extend the deadline for responding, and actually breaching the response deadline. The result (PDF), when it finally arrived in late March, featured extensive use of the famous black highlighter and bordered on nonsensical. 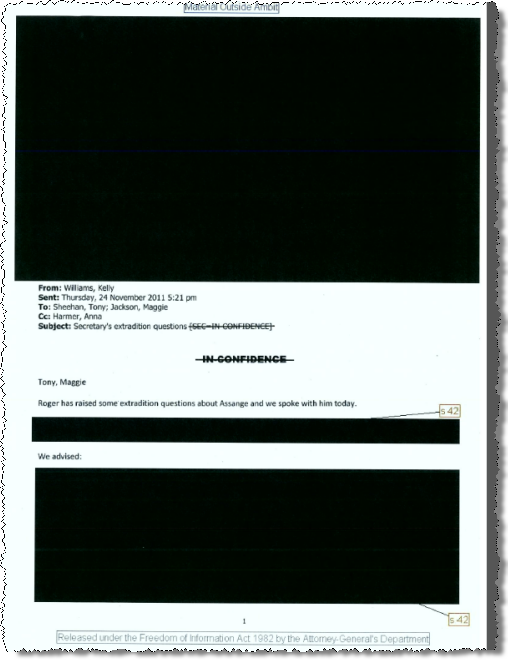 Among the treasures served up by Attorney-General’s were:

The redactions prevent any assessment of what exactly the government knows about the US government’s sealed indictment for Assange. The government has played dumb on the issue, publicly declaring it knows nothing about the matter, despite it apparently being common knowledge in Washington circles (as revealed by the Stratfor emails) that a sealed indictment against Assange had been issued.

Late today the Department of Foreign Affairs and Trade sought an additional month to respond to Senator Ludlam’s FOI request “on the basis that continuing international consultation and the complexity of decision-making required prior to finalising the documents for release.” The continuing consultation raises the possibility of the US or Swedish governments seeking to veto the release of documents under Freedom of Information. DFAT’s deadline for responding will, if the Office of the Information Commissioner agrees, be extended to 3 June (DFAT has withdrawn the claim that it will take it 4 months to process the request). The new deadline effectively ensures that the Australian Government’s position vis-à-vis Assange won’t be revealed before the outcome of his appeal against his European Arrest Warrant is concluded.

Are the govt’s Assange redactions <br>unjustified?

The way this government treats decency is abysmal and it deserves to be thrown out on its ear.
The alternative makes me want to cry.
The apathy of my country men and the press in general has lead to this.
What a poor future my children will inherit from the spinelessness of Australians in general.
Where is the mateship or the fair go that are supposed to be foundation stones of our people?

Notice on Q&A Pyne was tied in knots about the presumtion of innocence,innocence was alright for Assange ,but not for Thompson,so have to wonder if anyone will know where they stand if the coalition is the next government,the opposition has done nothing to help Assange.

The total eclipse redaction in those emails is pure comedy. All it needs is ‘I yearn for you tragically’ at the end.

The Labor government acts in a totally different way regarding US government handling our citizens when they were in oposition. Could it be Ms Gillard is the new face of Labor as was Tony Blair.

As Elizabeth Farelly bravely wrote in the Sydney Morning Herald on the 12 April, Australia is a client state of the USA and under the present junta, is also an obsequious lapdog. I can’t remember what Latham called them… conga line of something…? Even retired army generals are coming out and saying the Darwin base is the end of our sovereignty!

How many of you are aware of Julian Assange’s new current affairs program The World Tomorrow which started on Russia Today overnight and his first guest was the head of Hezbollah (Nasrallah) who hasn’t given an interview in yonks? Assange has already in the can, a series of interviews with famous people the West does not want you to hear speak out. Just go to rt.com and it’s the the lead story. He has a series in the can so even if those who hatre Australia extradite him to the US for torture and then kill him under the disinterested gaze of traitors to the Australian interest, then he will have at least got some of his news we never hear out.

Assange is under no illusions that the Ruskis are unlikely to let him do anything about them regarding Chechnya (their own false flag), but they have no interest in stifling debate on issues affecting the Great Anglo American Banking Conspiracy. It is a chess game so you can only wonder what the combined talents of the MSM, the US and our beloved homeland come up with on this.