Where the tax men get it from

Where the tax men get it from. The tax men of federal, state and local government collected a total of $357.9 billion in 2010-11. Australian Bureau of Statistics figures put the federal tax take for the year at $288.1 billion, the states and territories at $58.1 billion with the balance of $12.4 billion levied by local government. 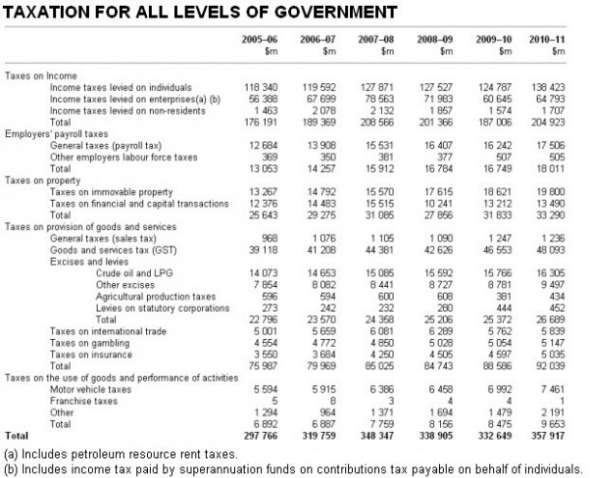 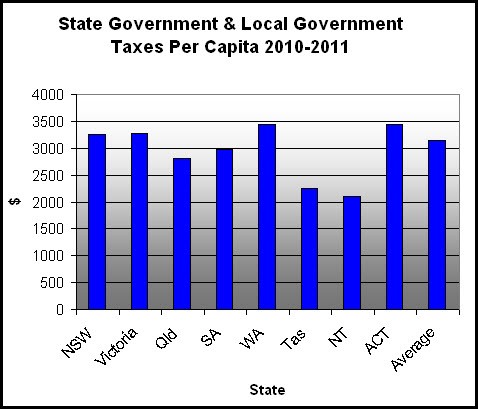 The fate of coalition members. Those House of Representative backbenchers keeping the Labor government in office might care to contemplate this finding on how the Social Democrats are faring in the UK after deciding to become part of a coalition government that is not liked by most of their supporters. 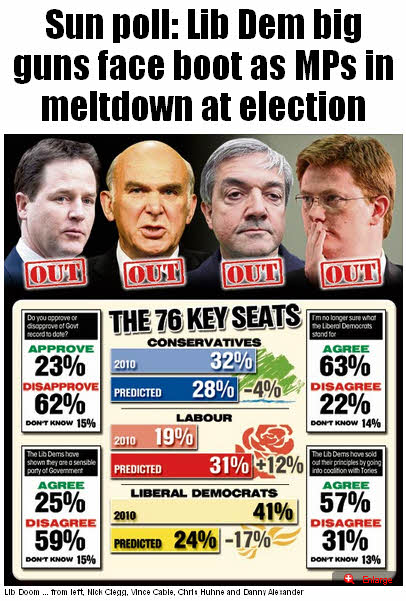 The survey polled 1524 voters in the 76 key seats being created when boundary changes come into effect — in areas where the Lib Dems have previously been strong.

At the 2010 general election, the party won a commanding 41 per cent of the vote in those areas, with the Tories at 32 per cent and Labour on 19 per cent.

The survey reveals a dramatic 17 per cent collapse in support, leaving the Lib Dems in last place among the big three on 24 per cent.

Labour leads on 31 per cent, with the Tories down four on 28 per cent.

You will find a wonderful commentary on the significance of these findings on Crikey’s The Stump.

A quote of the day for the socialists among you:

“Look the rich in the eye, and tell them not ‘I’m not dangerous’ but ‘I am dangerous’: I’m going to empty your pockets! … The number one question is not immigration or insecurity, the number one question in society is the sharing out of wealth … If I’m elected, we will share it out, and those who don’t want to share willingly will share by force.”

— The Left Front’s French presidential candidate Jean-Luc Mélenchon, who is showing around 16% in the latest opinion polls, addressing a rally at the weekend.

Like a little grass with that cabernet? In California there are those that call it “the only truly original style of wine created in the New World”.

A combination that delivers a quicker high than pot brownies and, according to Crane Carter, who is president of the Napa Valley Marijuana Growers, an organisation he founded and that two years ago was granted membership in the Napa Valley Farm Bureau, the combination of alcohol and marijuana produces “an interesting little buzz”. Carter told The Daily Beast that pot wine is increasingly fashionable in wine country and that it has a bright future in Napa. “People love wine,” he says, “and they love weed.”

Not that this is a product you will find in a retail bottle shop. It’s really just a party drink that winemakers break out whenever the mood strikes.

The recipe for pot wine, such as it is, consists of dropping one pound of marijuana into a cask of fermenting wine, which yields about 1.5 grams of pot per bottle; the better the raw materials — grapes and dope — the better the wine.

The fermentation process converts the sugar in grapes into alcohol, and alcohol extracts the THC from marijuana. Bud goes for maximum extraction: he keeps his weed wine in barrel for nine months before bottling it. He said he and other winemakers produce pot wine in small quantities, to be shared in “convivial moments with like-minded people”.

According to Carter, much of the marijuana used for wine comes from Humboldt County, which is California’s weed capital, but there’s also plenty of locally grown grass. Carter said cabernet, Napa’s main grape, is the variety of choice for marijuana-seasoned wine, and that fruit from the Stag’s Leap district is thought to pair particularly well with pot.

Poll Bludger: good news for One Nation, bad news for WA Labor, unless …

Err.. “how the Social Democrats are faring in the UK“? As the Sun caption showed, they are called the Liberal Democrats, or LibDems, as well as many other less polite names.

AR
Rapidly nearing 70 and the short term memory loss has struck! Thanks for the correction.