Ex-ABC board member discovers TV is boring. The opinion pages of The Australian are always open to anyone who wants to take a swing at the ABC. Today we were favoured by a strange diatribe attacking the Australia Network from Judith Sloan (bylined as the paper’s “contributing economics editor”). It seems she’s had some spare time during a visit to Asia and watched the AN service in her hotel room.

And what did she find? “Repetitive, pointless tosh.” News services that are “ponderous and unsatisfying”, or “patchy, unreliable and boring”. The offending material? All of the programming Sloan cites would be familiar to local viewers: Play School, The Wiggles, Sea Patrol, Packed to the Rafters, The Gruen Transfer, live relays of AFL football and composite versions of the daily ABC news and current affairs output. In other words — gosh! — Australian television. (In any case, Sloan is apparently ignorant of the programming requirements placed on the Australia Network by its client, the Department of Foreign Affairs and Trade. AN must show a set number of hours of children’s material, entertainment, contemporary Australian drama and documentaries every day.)

From there, Sloan stumbled into laughable error by declaring that “Sky News Australia is widely available in Asia and this would surely be the preferred outlet”. No, it’s not. What the undiscerning Sloan was watching was Sky News UK — the local version of Sky News isn’t available in Asia. Undeterred, she ploughed on to tell us there is “no cause for the continued existence” of the Australia Network, and that it is “very likely that Sky News would have produced a more interesting and vibrant range of programs”.

She also paused to refresh our memories about the Australia Network’s history, recalling “it got going in the early 2000s”. There was no acknowledgment that she had been a Howard-appointed director and deputy chair of the ABC during the same period. Didn’t she ever bother to take a look at its output? Nor was there was any disclosure that News Limited (publishers of The Oz) had a direct commercial interest in the failed Sky News bid for the Australia Network contract. Who’s being “patchy” and “unreliable” now? — David Salter

“The decision to close a title is never an easy one and Queensland Business Review is certainly no exception,” says Graham Gardiner, associate publisher of ACP’s Trader Business Media.

“Queensland Business Review, the Queensland 400 and the Book of Lists are strong brands, but in current market conditions it has been difficult for TBM to make them a commercially viable proposition. Moreover, a strategic review has determined that they no longer fit with the broader TBM strategy to grow and broaden its market-leading presence in the core transport and machinery industry sectors.”

Launched in 1998, QBR was aimed at servicing the news and information needs of small and medium-sized businesses, both in print and online. Former owner of QBR, Andrew Stewart, told SmartCompany the closure had come “out of the blue”. — Cara Waters of SmartCompany (read the full story here)

Front Page of the Day. As the American government reels from a Defense Department scandal involving military personnel misconduct in Columbia, ahead of President Obama’s visit to Cartagena, the New York Post has decided to lead today with a grainy photo of Hillary Clinton drinking  — what looks like an Aguila — at a Columbia night spot with the flattering headline: “SWILLARY.” At least she wasn’t texting. 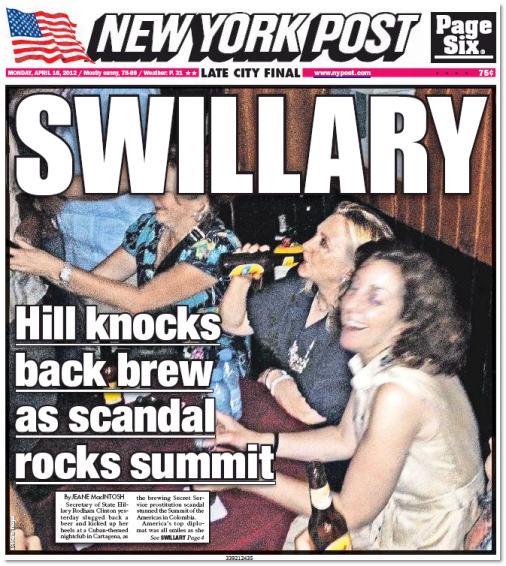 “The news that no Pulitzer Prize for fiction would be awarded this year came like a slap across the face to a book world still reeling from a Department of Justice suit filed against publishers trying to forestall an Amazon e-book monopoly.” — Salon

The Pulitzers: who won what?

“The Herald Sun has withdrawn its suggestion that its leak of Hamish Blake winning the gold Logie was because Google had accessed an unpublished story.” — mUmBRELLA

“Seven cemented its dominance over rival free-to-air networks last month, with an increase in its share of bookings from media agencies at the expense of Nine and Ten. ” — The Australian

“Rupert Murdoch’s battle to establish himself as a newspaper tycoon at the heart of the British media and political establishment is set to become a film, according to a report in Variety.” — The Guardian

“Italian police on Monday arrested at a Rome airport a journalist who last year fled to Latin America after he was implicated in a corruption and prostitution case involving former Italian prime minister Silvio Berlusconi.” — Hispanic Business

So she thinks her boss Murdochs Star crap would be any better? I dont think so.

I too am disgusted by Hillary’s beer imbibing. Clearly she should have sculled it. Perhaps we could line up Hawkie for a few lessons.