Logies gossip: Nine’s flood of angst. Tired and emotional celebrities were slinking back to their Crown Casino suites this morning after a night of post-Logies partying. And for some Nine stars there were nursing bruised egos after what we’re told was an ugly confrontation over the award for best news coverage — and who from the […]

Logies gossip: Nine’s flood of angst. Tired and emotional celebrities were slinking back to their Crown Casino suites this morning after a night of post-Logies partying. And for some Nine stars there were nursing bruised egos after what we’re told was an ugly confrontation over the award for best news coverage — and who from the Nine team should have claimed it:

“The gong was for coverage of the Queensland floods. Yet Nine PR decided all three east-coast anchors would get up to accept. The Melbourne and Brisbane autocue readers had to play minor bananas to Sydney’s Peter Overton, who almost knocked a few people over virtually running up on the stage to get the microphone first. With no auto prompt Pete managed to to declare “I’m a big cog” in some sort of contorted wheel analogy then while explaining himself got the cog in front of the wheel yet again. But that wasn’t the problem, or problems. Overton said “I” accept this on behalf of the Nine team three times and hogged the limelight. The other anchors waited for an eternity to all say they accepted on behalf of all — but in shorthand. Queensland’s Andrew Lofthouse — well, they were the Queensland floods — finally got a little spruik.

“But the chagrin was off stage where Karl Stefanovic was being consoled by Lisa Wilkinson and others as to why he wasn’t up there. As Lisa said on Today this morning, Karl deserved part of that Logie because he ‘worked 16 to 18-hour days’. The unsaid popint was that Overton did sweet flood all up there in Brisvegas. He, well, anchored the Sydney news from there. Karl was the ongoing host day in, day out of the rolling coverage. Oh the unfairness of it all. And, er, what was Melbourne anchor Peter Hitchener doing there at all? Moral to the story, Overton’s speech was the biggest cog-up of the night.” 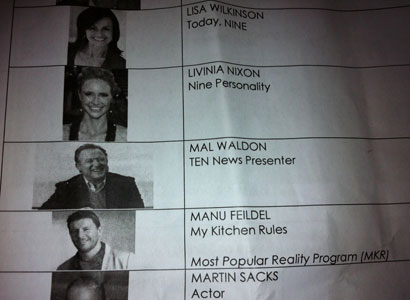 “I left CAV in disgust after experiencing bullying and harassment. For example, I was removed from an acting role without notice while overseas on holiday and while my manager was in hospital — on the grounds that you could only be in an acting position for three months. The person put into that role acted in it for over a year before getting the job over me and others in a farcical interview process. I complained and the review was a total joke — I was told I could not have witnesses but the independent reviewer would not accept my evidence as ‘hearsay” (it was not a court!) and told me I should have arranged witnesses. One staff member I observed was not spoken to by her manager for over a year (same person as got the management role). People regularly sidelined. Bullying tactics rife. Qualified people shunned over unqualified bullies. It was a disgrace so I left (and doubled my income, thanks CAV).”

Katter-mobile on Bligh’s hippy turf. Spotted: the Bob Katter express, deep in progressive heartland in Brisbane. A Crikey reader captured the double-decker outside the West End green markets, where local farmers sell their wares each Saturday — in the heart of ex-premier Anna Bligh’s old seat. “No sign of KAP candidate Robert Wardrop or even the big guy himself,” says our correspondent. “In fact the bus was sitting seemingly unattended. Lots of local quips about the lights being on but no one at home.”

Council work just shades of grey. Only in Sydney? A Paddington local reports for Crikey:

“The scene: Windsor Street in leafy, trendy Paddington, street of multimillion dollar homes. Woollahra Council-employed contractors spend 10 days installing pram ramps and new curbs, gutters and bits of pavement. The work started before Easter and finished off early last week. Lots of noise and concrete, dust and sawing, but the result looks good — nice for all the baby-bonus mums and old people with their frames, walkers and joggers who can stop stepping delicately around some of the problem areas.

“Then last Friday the street is awakened to the noise of jack hammers breaking up part of the new pram ramps, specifically the new gutters. Every ramp has a new gutter piece installed by the end of play on Saturday. (And by early Saturday night, the new work is suitably endorsed by local dogs and others making their marks in the fresh concrete.) The locals ask: why the extra work? Well, according to a former councillor, the concrete in the gutters was the wrong colour. Lord knows why that was a problem. Including the new ramps and gutters, and the replaced bits of footpath, there are numerous shades of concrete up and down Windsor Street. A veritable palette of grey. Your local government rates at work, perfectionists one and all.”

Flight diverted in fuel emergency. From a plane-watcher yesterday: “A Virgin 737 flight number 736 at around 1300LT declared a Pan-pan due to a fuel emergency and diverted into Brisbane Airport. They were met by fire services. Seemed like a normal approach and landing.”