Channel Ten News’ Titanic long bow. It was the 100th anniversary of the sinking of the Titanic yesterday and newsrooms the world over scrambled for an angle, any angle, to bring a local flavour to the story. Cue last night’s Channel Ten News, which retold the story of stewardess Violet Jessop who had “survived” the sinking of all White Star Liner’s Olympic class ships (Titanic, Britannic and Olympic) and “might just be the luckiest seafarer of all”.

There was one problem though: the Olympic never sank. The Olympic, the first of three enormous ships commissioned by White Star Liners (and was also captained on its maiden voyage in 1911 by the Titanic‘s captain E.J. Smith), had a few mishaps throughout its lifetime but, unlike her sisters, never made it to Davy Jones’ Locker. The Britannic sank on November 21 1916 for the loss of 30 lives. The most infamous of the trio, the Titanic, sank on April 15 1912 with 1514 deaths.

Despite a mutiny, a couple of accidents and service throughout World War 1, the Olympic — or “old reliable” as she was fondly referred to — was retired in 1935 and sold to a private buyer. — Leigh Josey

Front page of the day. South Korea’s JoongAng Daily led with the ongoing missile testing by its aggressive northern neighbour as the North Korean despot Kim Jong Un addressed his nation and the world for the first time: 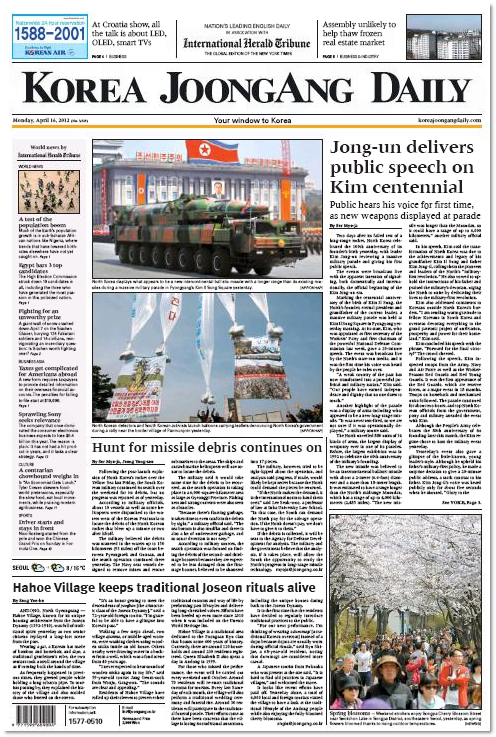 The Department of Corrections. This is why full stops are important. This correction appeared in The Australian today:

Obit of the week. Obituaries are deeply personal but sometimes an obituary is written that transcends the norm. The obituary for Michael “Flathead” Blanchard that appeared in the Denver Post on April 12 is one such example. So much so it has become an “internet sensation” … 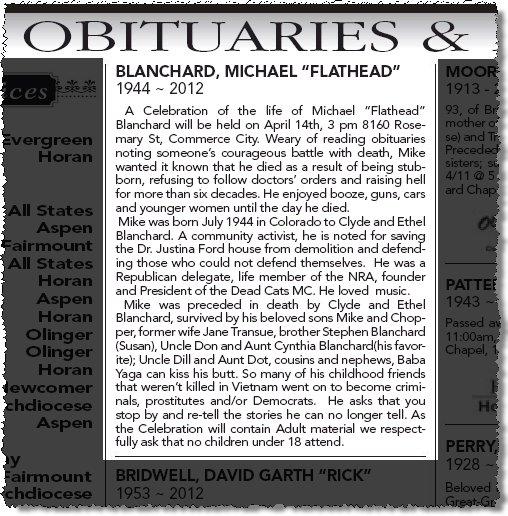 “The Herald Sun has apologised for inadvertently leaking the winner of the Gold Logie during a live test of the newspaper’s new iPad application on Sunday night.” — Yahoo News

“Unlike other media, the internet in Russia, has developed largely untouched by the arm of the state. The protests have prompted many to wonder: is that about to change?” — The Guardian

“Details have emerged about the upcoming independent film about the life of Steve Jobs, thanks to an interview with producer Mark Hulme by Neowin.” — Mashable

Winners to watch for when Pulitzers are announced

“To predict who and what will win Pulitzer stardom now involves scanning what most think of as lesser constellations.” — Poynter

“What’s the going rate for inducing someone to commit career suicide? Apparently you can do it for five grand, as long as that person has a sufficiently large axe to grind against his employer.” — Forbes