Labor’s false hopes about the Greens

So the ALP is hoping that the retirement of Bob Brown as parliamentary leader of the Greens will give them the chance to claw back votes from those nasty lefties.

False hopes about the Greens. So the ALP is hoping that the retirement of Bob Brown as parliamentary leader of the Greens will give them the chance to claw back votes from those nasty lefties. I wish them luck but somehow I doubt it.

Adopting a “great men of history” approach to contemporary politics rarely seems to fit. I recall the retirement of Don Chipp and then the resignation of Janine Haines from the Senate and her subsequent failure to win a House of Representatives seat being the sounding of the death knell for the Australian Democrats. They staggered on to greater heights before their eventual demise.

And unlike the Democrats the Greens have a coherent ideology that gives them a clear space in the political spectrum as Labor of necessity moves to the middle ground where government is won or lost. That will not change without Bob Brown. Just as his retirement from the Tasmanian Parliament to be succeeded by Christine Milne back in the 90s barely had an electoral impact.

And when she departed the local scene the Greens eventually rose to new high points. 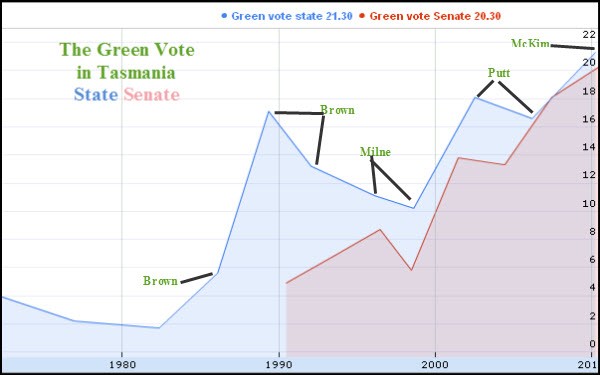 Getting to the point of it. The basis of a percentage can be a bit confusing for some. This morning the Sydney Morning Herald website carries this AAP report (with the emphasis added):

That would be quite a hike and unlikely to be endorsed even by a Liberal finance spokesman. I think Andrew Robb had in mind this report from the same paper back on Friday:

“ANZ has raised its interest rates on mortgages and small business lending by 6 basis points from April 20, blaming continued cost pressures from deposits and wholesale funding … equal to 0.06 of a percentage point.”

Not that I’m complaining for it gives me an excuse to highlight again one of my favourite cartoonists xkcd: 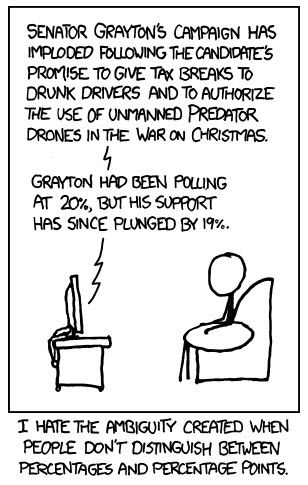 And when you are on xkcd’s site, make sure to run your mouse over the drawing to reveal extra little gems like this one:

“Grayton also proposed making college scholarships available exclusively to s-xually active teens, amnesty for illegal immigrants who create room for themselves by killing a citizen and a graduated income tax based on p-nis size. He has been endorsed by Tracy Morgan, John Wilkes Booth’s ghost, and the Time Cube guy.”

Complications for Europe. The predictions for the French presidential election which gets underway with the first round of voting this weekend suggests that troubles are in store for the whole of Europe.

The opinion polls are all pointing towards a second round victory for the Socialist Party candidate François Hollande and if that happens conflict between France and Germany over European economic policy seems inevitable.

Hollande has shown no enthusiasm for the prevailing policies of fiscal austerity forced on Europe by an alliance between president Nicolas Sarkozy and German Chancellor Angela Merkel.
Even President Sarkozy, faced with the polling figures putting him 14 points behind his Socialist rival, is backing away from the economic policies that have made him unpopular. He told a rally at the weekend:

“Europe must purge its debts, it has no choice. But between deflation and growth, it has no more choice. If Europe chooses deflation it will die. We, the French, will open the debate on the role of the central bank in the support of growth.”

An Institut Français d’opinion Publique poll at the weekend for the Journal du Dimanche newspaper found that 64 per cent of the French disapprove of President Sarkozy. That figure is far higher than the 46 per cent disapproval rating of Valérie Giscard d’Estaing, the last French president to fail to win a second term, in 1981. 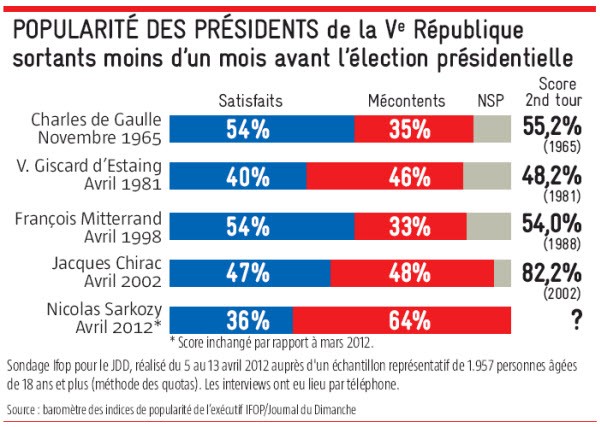 “Coherent ideology”. Those 2 words nail it. I know exactly what the Greens stand for. All I knew about the Democrats was that they weren’t Liberal or Labor.